You've subscribed to A Richard Sherlock Whodunit! We will preorder your items within 24 hours of when they become available. When new books are released, we'll charge your default payment method for the lowest price available during the pre-order period.
Update your device or payment method, cancel individual pre-orders or your subscription at
Your Memberships & Subscriptions
There was an error. We were unable to process your subscription due to an error. Please refresh and try again. 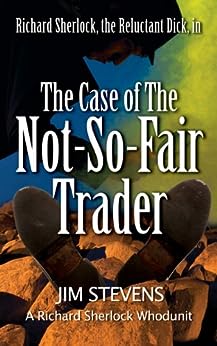 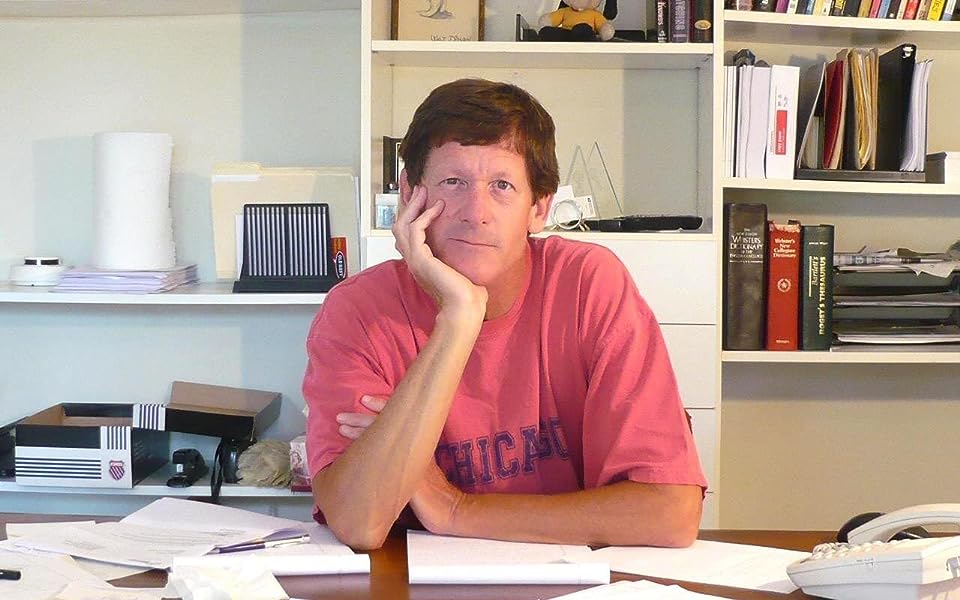 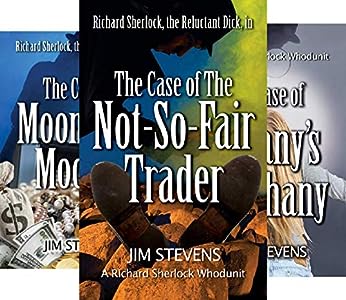 Jim Stevens was born in the East, grew up in the West, schooled in the Northwest and spent twenty-three winters in the Midwest. Jim Stevens has been writing for over thirty years. Usually without much success, but for some reason he keeps writing. Jim started writing TV series specs in the 1970's and starved. He segued into spec movie scripts and really starved. He went into the corporate world for a twenty-five year career in broadcasting and advertising, but just couldn't drop his pencil. He found time to write plays in the Chicago theater scene, wrote, produced, and directed numerous short films, videos, and TV commercials, created TV pilots, and even optioned a few movie scripts that never saw the glare of the Klieg lights.

Jim has been writing novels for the past four years. His Richard Sherlock Whodunit series has ranked him in the top 10% of Amazon authors. He is also the author of WHUPPED, a reverse romantic comedy from many different points of view. His latest novel, Hell No, We Won't Go A Novel of Peace, Love, War, and Football is his first writing of a 'serious' nature.

4.3 out of 5 stars
4.3 out of 5
667 global ratings
How are ratings calculated?
To calculate the overall star rating and percentage breakdown by star, we don’t use a simple average. Instead, our system considers things like how recent a review is and if the reviewer bought the item on Amazon. It also analyzes reviews to verify trustworthiness.
Top reviews

Mike
3.0 out of 5 stars Light but fun whodunnit
Reviewed in the United States on March 5, 2015
Verified Purchase
Really, how can you pass by a book where the detective is called "Richard Sherlock" and is described as a "Reluctant Dick"? It has to be worth at least a smile.

So I bought it, started reading it and wondered if my liking for wordplay had led me astray. "The Case of the Not-So-Fair Trader" is so lightly written and so under-described that I struggled to get traction with it.

Then I realised that it was my expectations, rather than the book itself, that were holding me back. I thought I'd bought a novel. In reality I'd bought textual television.

The dialog was fun and skillfully done. Each chapter had a witty title and at least two or three smile-worthy moments.

A slightly scatty, ensemble cast was being assembled, in an "Season One, Episode One" sort of way, to do the detecting: Richard Sherlock - divorced dad, fired ex-cop, disgruntled insurance investigator with an obsessive eye for detail; Tiffany: a rich young woman side-kick, with no understanding of a world in which the phrase "I can't afford it" applies to her, an obsession with her looks but a good heart and a strong desire to learn - as long as it doesn't interfere with her spa days; two lazy but talented cops, willing to let their ex-colleague, Richard Sherlock, solve their case for them, and Sherlock's two cute daughters who offer random insights into the case and make their father more human.

Once I relaxed into this TV-on-the-page, I began to enjoy myself and get into the whodunnit aspect of the book. Talk about complicated. Jim Stevens doesn't cheat but I guarantee that you won't guess the denouement. The best thing about the plot was that it gave lots of opportunity for humour at the expense of all those rich folks who make their wealth without lifting a finger that all of us love to hate.

By the end of the book I couldn't decide whether I had read a "novelisation" (horrible word) of a TV script or whether Jim Stevens was the new P.G.Wodehouse. Either way, I knew I was going to be reading more. "The Case of the Moomah's Moolah" is already in my To Be Read pile.
Read more
17 people found this helpful
Helpful
Report abuse

ST
3.0 out of 5 stars Inconsistent series but okay
Reviewed in the United States on March 13, 2018
Verified Purchase
The first one was definitely the best in this series but this one is better than the last one I read. He keeps messing with Tiffany. I hope her name's Tiffany. She started out appearing clueless yet actually smart and funny then she became ridiculous and unrealistic and now she's grown up and blah. Sherlock's kids are really the stars of the books. I don't get the back thing either. I mean, okay, but what does it contribute to the books? I would read another but I would suggest the uninitiated read Moomah's Moola first. Also, if I remember rightly (no guarantees) he has been writing for a long time and should either have better writing skills or better editing. Lack of both is a given with younger writers but it's beginning to seem like a virus and nobody's immune.
Read more
One person found this helpful
Helpful
Report abuse

R.L.
5.0 out of 5 stars A Review of The Case of the Not-So-Fair Reader by author Jim Stevens
Reviewed in the United States on April 19, 2018
Verified Purchase
I would recommend this book to anyone who enjoys a great who-done-it. It was fast-paced, fun and interesting all tied up in one. The author not only developed the storylines well but his use of humor in the main character's dialogue and the introduction and development of Tiffany's character was an added bonus.
Knowing this is the first in the Richard Sherlock Series, I also enjoyed the personal information about the main character with the inclusion of his daughters and ex-wife.
Jim Stevens ' writing is so real that any reader could picture the settings described very clearly. I, for one, can relate to the back problems. Seriously, I enjoyed this book and plan to follow this author.
Read more
Helpful
Report abuse

(Rachelle) Rae Long
5.0 out of 5 stars A "Sherlock" witty Who-dunit
Reviewed in the United States on June 14, 2020
Verified Purchase
This was surprisingly, (to me) a charming, funny and witty Whodunit that rock my socks with talented writing! I am impressed with the authors talent, his development of the (sometimes) hilarious yet expected characters, that I felt I was LITERALLY watching a television show with the characters of a murder mystery assembled throughout the book. Each chapter was well thought out too. I will be buying more of these books in this series, because I cannot wait to see the character development. THe book was a delight, and I highly recommend it. A nice change of pace.
Read more
Helpful
Report abuse

Kindle Customer
5.0 out of 5 stars Light, entertaining, twisted, satisfying mystery read
Reviewed in the United States on January 7, 2019
Verified Purchase
Author Stevens has taken a former professional/detective, Richard Sherlock, and placed him in a different professional detective role, which Sherlock does not see as being worthy of his skills. Yet while forced to train, so to speak, the poor little ditzy rich daughter of his current boss, he forges ahead using all his skills and knowledge from his time as a detective, to help the FBI, IRS, and police department solve not just one crime, but at least three...or more...while saving his boss millions in insurance pay-out dollars. Clever, intriguing, fun read.
Read more
Helpful
Report abuse
See all reviews

Perkins
5.0 out of 5 stars Witty, funny and a great crime story
Reviewed in the United Kingdom on July 15, 2015
Verified Purchase
Richard Sherlock is an insurance investigator, ably and at some times annoyingly assisted by Tiffany, his employer's daughter. He is called to investigate the death of Alvin Augustus, a stock market trader, a man loathed by everyone he knew, especially his dysfunctional family who stand to inherit his millions. However, not only is Richard's boss determined not to pay out on any insurance claim but the family is horrified to learn that, at the time of his death, Alvin was stony broke. I loved this book. Richard Sherlock is a great character and Tiffany is a blast. The book is full of dry, witty humour and even some of the bad characters have likeable traits. There is a back story with Richard's battles with his ex-wife and his 'kid days' with his two daughters and the whole book just gels together brilliantly. There is great attention to detail and plenty of standout good bits to lift it above the ordinary and make it a thoroughly enjoyable read. I'll definitely be looking for more Sherlock investigations.
Read more
2 people found this helpful
Report abuse

Mrs T
4.0 out of 5 stars The case of the not so fair trader
Reviewed in the United Kingdom on March 25, 2015
Verified Purchase
I should not have enjoyed this as it was very American, it had a long list of characters easily confused with one another and it contained a lot of bad language. The hero was too laid-back, his female sidekick too silly and his daughters old beyond their years. However, I did want to know 'whodunit' and so read to the end, being suitably impressed and surprised at the convoluted denouement. I might be tempted to read more from this author in the future.
Read more
2 people found this helpful
Report abuse

Galning
4.0 out of 5 stars Almost a 5*
Reviewed in the United Kingdom on February 27, 2017
Verified Purchase
Well. Initially Tiffany was irritating me and I thought wasn't going to like it - but I warmed to her as the pages flew by. And they did fly. Didn't want to put it down and didn't guess who dunnit.

Not quite a 5* (I reserve that for books that I love so much that I'd want to start them over again) but not far off. And will be moving on to book 2.
Read more
Report abuse

mosey
5.0 out of 5 stars Loved it .
Reviewed in the United Kingdom on July 20, 2019
Verified Purchase
I absolutely loved this book. I have the next one to read too! Keep them coming. Twists and turns all the way
Read more
Report abuse
See all reviews