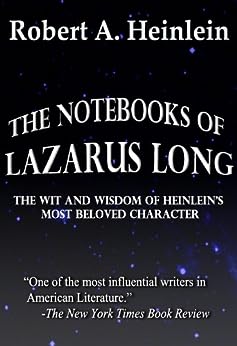 Long appeared in Heinlein's series of 'future history' novels and was the oldest living member of the human race: his adventures are detailed in these 'notebooks' which provide excellent visual illustration throughout. Recommended for Heinlein fans with a special interest in these novels and the Long protagonist. --Midwest Book Review --This text refers to an out of print or unavailable edition of this title.

4.4 out of 5 stars
4.4 out of 5
210 global ratings
How are ratings calculated?
To calculate the overall star rating and percentage breakdown by star, we don’t use a simple average. Instead, our system considers things like how recent a review is and if the reviewer bought the item on Amazon. It also analyzes reviews to verify trustworthiness.

Be Careful, this is not the wonderfully illustrated D.F. Vassallo illuminated edition of the Notebooks. It is evident from some of these reviews that Amazon has either confused or stupidly combined reviews associated with the Vassallo edition. Anything herein that refers to Illustrations is obviously talking about the Vassallo edition, as there are absolutely no illustrations of any kind in the Spectrumliteraryagency.com rip-off edition.
Read more
46 people found this helpful
Helpful
Report abuse

Casandra W Perry
5.0 out of 5 stars full of (mostly) good advice
Reviewed in the United States on August 11, 2019
Verified Purchase
And pretty funny too, in places. Heinlein offers surprisingly serious and applicable wisdom and then follows it with something absurd. Still there are some fantastic "rules" to live your life by if you're willing to pick and choose (lol)

A couple of examples:

Always listen to experts. They'll tell you what can't be done, and why. Then do it.

Your enemy is never a villain in his own eye. Keep this in mind, it may offer a way to make him your friend. If not, you can kill him without hate--and quickly

So, yeah. Some of them are wisdom for the ages and some are a bit silly. Your mileage may vary.
Read more
4 people found this helpful
Helpful
Report abuse

Jay Denn
5.0 out of 5 stars Wonderful!!!
Reviewed in the United States on October 20, 2020
Verified Purchase
It was great to revisit this book. I first read it as a teenager. Well, I read Time Enough For Love, and most if not all of this came from that Heinlein book. These "quotes" from Lazarus Long really help flesh out that character. I also believe it is a glimpse into the mind of Mr Heinlein. His views on life, politics and what the future holds for us is on full view... I have to admit Heinlein was a great influence on me as a young man. Many of these quotes have stayed with me for all my life... Yes, I'm old. Not hard to figure that out... Read this book. And read Time Enough For Love. I hope you enjoy them as much as I...
Read more
Helpful
Report abuse

Airedad
5.0 out of 5 stars An excellent read for any Heinlein fan
Reviewed in the United States on October 10, 2017
Verified Purchase
I think I "grew up" reading Heinlein, and his writings were what a lot of what started me on the path which led my becoming a physicist.

Reading it I also "recalled" something of which I was already conscious and have "known" for at least a couple of decades. That is, in reading Heinlein's works I also also picked up a lot of ideas which factor into my views on a lot of things such as individual responsibility, obligations, government, obligations, and the like.

Reading it brought back many peasant memories, and I thoroughly enjoyed doing so. I would recommend this book to anyone who has read more of Heinlein's works than "just" 'Stranger in a Strange Land.'
Read more
4 people found this helpful
Helpful
Report abuse

johnwmgibson
5.0 out of 5 stars No better book of wit and wisdom has writ than this book.
Reviewed in the United States on October 16, 2016
Verified Purchase
Robert Anson Heinlein was one of the best known and read science fiction writers of his time, and still is. His prose was always straight forward, never burdening his reader with unknowable scientific jargon to back up his great tales. He wrote about capable men and women, those who were the pioneer stock that made America great. In this book is contained the best quotes from most favor character, Lazarus Long (born Woodrow "Woody" Wilson Smith of the "Howard Families" of long-lived human's). Lazarus is a man after my own heart, and I've tried to live by wisdom (though I've always disagreed with Heinlein's distaste for faith - I've always found among the multitude of churches humans have divided themselves into, as is their want, that are a few good and decent shepherds how understand how things really work and aren't afraid to get their frocks or collars dirty, but they are few). I recommend this book to all free thinkers, believers in the First Amendment, and who distain the phoniness of "political correctness". Buy, it, enjoy it, and always keep it handy during any election season.
Read more
2 people found this helpful
Helpful
Report abuse

Michael Roach
5.0 out of 5 stars A great dea; of wisdom.
Reviewed in the United States on July 16, 2020
Verified Purchase
I had a hard copy of this years ago that disappeared somehow in moving; and I wanted to re-read something that made part of developing my philosophy as a young man. I got older, but much of it stayed with me. Re-reading has added back a number of points that had gradually slipped away as time passed.
Read more
Helpful
Report abuse

Kindle Customer
5.0 out of 5 stars A great book!
Reviewed in the United States on April 24, 2015
Verified Purchase
This book should probably be titled "The Philosophy of Robert A. Heinlein." This book is a collection of very direct statements of the author's ideas and opinions and attitudes on a variety of subjects, rather than reading his books of fiction and gleaning this information from the stories.

I enjoyed reading the book very much. Although I have read many books by Heinlein over the course of many years, there was still new material for me in this book.
Read more
2 people found this helpful
Helpful
Report abuse

Stonegiant
5.0 out of 5 stars An excellent collection!
Reviewed in the United States on February 11, 2018
Verified Purchase
Some of the greatest quotes by an author in the 20th century. Although Mr. Heinlein was not only a well-credentialed futurist (the inventor of "waldos", for example), his sense of humor and elegant critique of the human animal are well represented in this collection. Highly recommend it!
Read more
2 people found this helpful
Helpful
Report abuse
See all reviews

CSC
1.0 out of 5 stars Very disappointed
Reviewed in the United Kingdom on July 11, 2021
Verified Purchase
I was expecting "beautifully designed trade paperback, filled with illuminations and illustrations" as per the description - so bought it on impulse. What I should have done was "look inside the book" or read the customers reviews - there the truth is revealed. The description of the book does not reflect what you get in the Kindle version. Buy a Kindle version of RAH Time Enough for Love - you get these quotes and the full story.

The one star is because I have to - needs to be zero stars.
Read more
Report abuse

Harri
1.0 out of 5 stars Almost empty book No story at all
Reviewed in the United Kingdom on April 19, 2020
Verified Purchase
I wish I had read more reviews particularly the ones saying "This is a bunch of meaningless quotes and a complete rip off"
Read more
2 people found this helpful
Report abuse

plato
1.0 out of 5 stars Very Disappointing
Reviewed in the United Kingdom on September 25, 2013
Verified Purchase
I was hoping this would be some previously unpublished material, but in fact it is just a bunch of quotes from some of Heinleins's other books. It's a real rip-off, especially when viewed on a Kindle where all you get is one sentence in Arial on each page. Heinlein's words and opinions are good, but this book is just a way to monetise his name and reputation further.
Read more
2 people found this helpful
Report abuse

K. Farrow
3.0 out of 5 stars if you have read "Time enough for love" don't bother with this
Reviewed in the United Kingdom on November 29, 2012
Verified Purchase
Although this is a good read with many words of wisdom don't bother to get it if you have read "time enough for love" as I could find nothing new in this. It looks like they just took the interludes from TEFL and sold it as a seperate item to make more money. If you haven't read and do not intend to read TEFL then it is quite good in its own right, but in no way compares with the depth of TEFL.
Read more
4 people found this helpful
Report abuse
See all reviews