You've subscribed to Notes from Gusto! We will preorder your items within 24 hours of when they become available. When new books are released, we'll charge your default payment method for the lowest price available during the pre-order period.
Update your device or payment method, cancel individual pre-orders or your subscription at
Your Memberships & Subscriptions
There was an error. We were unable to process your subscription due to an error. Please refresh and try again. 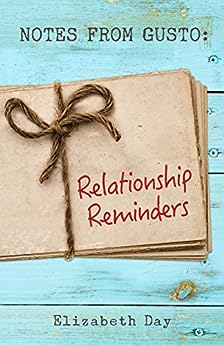 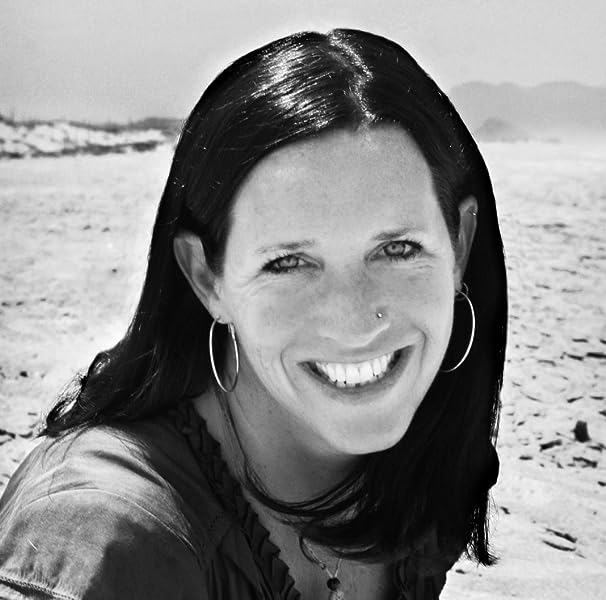 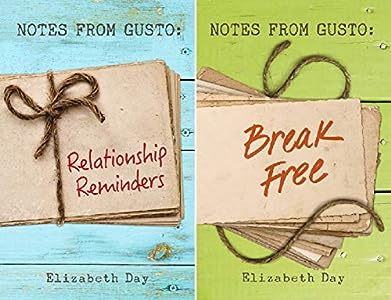 Elizabeth Day, author of the inspirational novel "Living with Gusto" and creator of TheGustoCafé.com, a website for daily empowerment, brings you the first book in the Notes from Gusto series: "Relationship Reminders."

After graduating from Boston College, she joined Teach For America and taught English for five years. During that time, she earned her master’s at DePaul University, developed a writing program for high-risk students that became a Model Program for Chicago’s alternative public schools, and while teaching in Los Angeles, she was named Teacher of the Year. She went on to co-found a boutique publishing house where she helped launch the careers of highly successful authors, including Kaya McLaren and Jordan Sonnenblick, and received publishing and editing awards from the Northwest Book Publishers Association. After six years in the publishing industry, she closed the doors of the publishing house to become an independent book editor. In her career as an award-winning editor, her clients included Amanda Turner, Robert Kiyosaki, and Master P.

Elizabeth lives with her husband and two children in Todos Santos, Mexico, and San Clemente, California. --This text refers to the paperback edition.

5.0 out of 5 stars
5 out of 5
17 global ratings
How are ratings calculated?
To calculate the overall star rating and percentage breakdown by star, we don’t use a simple average. Instead, our system considers things like how recent a review is and if the reviewer bought the item on Amazon. It also analyzes reviews to verify trustworthiness.
Top reviews

Cathy
5.0 out of 5 stars EXPECT TO BE THRILLED
Reviewed in the United States on June 25, 2015
Verified Purchase
I LOVE THIS BOOK!
You'll want to have a copy near you at all times.
Maybe you're troubled and looking for guidance - or - You're cruising through a blissed-out life and all is well with your relationships. Either way, amazingly, you'll find an abundance of perfect, inspiring, one-page reminders to ponder and possibly move you in a different direction or enhance what is already working.
When you focus on improving your relationships, you'll notice how you learn, understand, love and appreciate so much more about your authentic self.
The wisdom of Gusto/Elizabeth Day is extraordinarily eye-opening, empowering and can be taken to heart with a smile.
Expect to be thrilled by this thought-provoking treasure of a book.
Read more
3 people found this helpful
Helpful
Report abuse

Lilmomma
5.0 out of 5 stars Great book
Reviewed in the United States on November 5, 2020
Verified Purchase
Lots of encouraging saying.
Lot of good vibes. I really enjoyed this book. I can relate a lot to what they were saying.
Read more
Helpful
Report abuse

Travis Olsen
5.0 out of 5 stars Gusto pulls me in!
Reviewed in the United States on August 6, 2015
Verified Purchase
Notes from Gusto is a collection of experiences that are being shared with you, rather than a book that gives you advice. It's all written from the point of view of Gusto, who loves life as much as you do and wants to live it to the fullest. Gusto doesn't try to tell you what to do, but rather shares their experiences in a way that you can relate to and benefit from. I love Gusto's notes, and they inspire me several times per week!
Read more
2 people found this helpful
Helpful
Report abuse

CMC
5.0 out of 5 stars Fantastic Book
Reviewed in the United States on June 21, 2015
Verified Purchase
Sometimes you have a question and do not know where to look for an answer. Notes from Gusto: Relationship Reminders is your answer! The books reminds you about what is important in life and to focus on the positive. Everyone is engaged with many relationships -whether work, family, friends. This book helps remind you how to be your best in any relationship.
Read more
One person found this helpful
Helpful
Report abuse

LB
5.0 out of 5 stars Everyone Needs This
Reviewed in the United States on June 1, 2015
Verified Purchase
I think everyone needs a copy of Relationship Reminders as it is easy to get caught up in the moment and forget about things that matter most. This book brings you back to reality and is a great reminder of how to be good not only to yourself, but to a spouse, family member and friends. I love randomly opening the book and flipping to a “reminder” it instantly puts a smile on my face.
Read more
2 people found this helpful
Helpful
Report abuse

Meg Spence
5.0 out of 5 stars This one is a keeper!
Reviewed in the United States on June 2, 2015
I loved Living with Gusto, so when I saw that Elizabeth Day had a new book coming out, I couldn't wait. "Notes from Gusto: Relationship Reminders" is different in that rather than curling up with a cup of coffee and losing myself in the world of Gusto, I can keep it close and get a piece whenever I need it. Just when I am feeling a little disconnected, or disjointed, or something is nagging at me, I see Notes from Gusto sitting across the room, like it is just waiting for me to ask. I like to hold it for a second, focusing on my nagging feeling, then open it. I open to a random page and read it. The notes and thoughts that I find resonate so beautifully with what is going on at that moment it is uncanny. I have been known to immediately call my best friend and tell her what Gusto helped me realize or uncover. Sometimes it is so unnerving that I turn to the next page just to make sure that every page wouldn't fit my situation, and the next page proves that I indeed opened to the perfect message. "Notes from Gusto: Relationship Reminders" will stay on my desk, my coffee table, my bedside table or counter, reminding me to open it up and bring more awareness to my experiences regularly.
Read more
4 people found this helpful
Helpful
Report abuse

Wendy
5.0 out of 5 stars More Wisdom From the Great Gusto!
Reviewed in the United States on May 22, 2015
In Notes From Gusto, Relationship Reminders, author Elizabeth Day gifts us with a more in depth peek into the wisdom of Gusto, a character I came to love in her first book, Living With Gusto. This follow up is not about Gusto’s quirky personality or charm, though. It’s all about sharing plain and simple heart-felt advice, suggestions, and inspiration, urging the reader to be more in touch with his or her own authenticity, while finding it within to just love yourself more in order to enjoy healthier relationships with others.
This is the kind of book that encourages you to not necessarily read it all at once, but rather to use it as an oracle to consult as you’re moved to. Reading the pages of the numbered pearls of wisdom, I found myself curiously measuring how my own authenticity measured up…gauging it according to how much of Gusto’s wise suggestions I may have actually implemented without realizing it. Day’s gentle touch with Gusto allows the reader to accept these pearls with simple clarity and understanding, making the space for one to forgive and love oneself (and therefore others) with a more generous heart. You might even be so touched (and surprised) to find your eyes tearing up at times….as much as you will be smiling. No matter how evolved you believe yourself to be, you will benefit from experiencing these beautiful Notes From Gusto. And if you’re experiencing any heaviness at all, the weight of the world will be lifted off of you.
Read more
4 people found this helpful
Helpful
Report abuse
See all reviews

Ecoulthard
5.0 out of 5 stars kept it
Reviewed in the United Kingdom on November 23, 2015
Verified Purchase
ordered it - got it - kep it
Read more
Report abuse
See all reviews
Back to top
Get to Know Us
Make Money with Us
Amazon Payment Products
Let Us Help You
EnglishChoose a language for shopping. United StatesChoose a country/region for shopping.
© 1996-2021, Amazon.com, Inc. or its affiliates