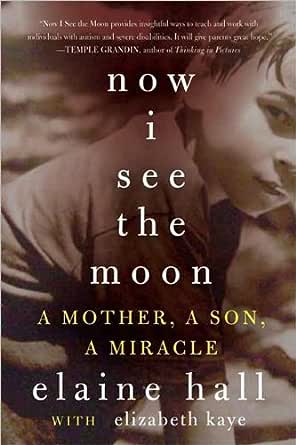 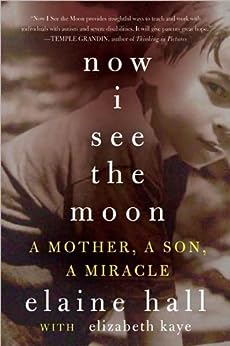 Now I See the Moon: A Mother, a Son, a Miracle Kindle Edition

Starred Review. In this especially timely, painstakingly positive work, a children's film coach recounts her adoption of a troubled Russian toddler and her long, tortuous, ultimately enlightening journey to treat his nonverbal autism. A former actress, Hall worked as a successful "baby wrangler" for Hollywood feature films; 40-something, married nine years, active in her Jewish faith, and devastated by successive miscarriages, she along with her then husband traveled to an orphanage in Yekaterinburg, Russia, to adopt a quiet two-year-old. Neal, as she named him, couldn't speak or make eye contact, and despite Hall's belief in his innate intelligence, the boy was eventually diagnosed with "severe sensory dysfunction." She beautifully chronicles Neal's development to the age of his bar mitzvah vis-aÌÇ-vis his responses--positive and negative--to the slew of experts and coaches Hall found to create therapies tailored to his very individual needs. Though Hall's marriage dissolved under the pressure of Neal's care, and there were moments Hall truly believed she and her son were "slouching toward normal," she had to accept that Neal would never be "cured" of autism. She created her life's work in the Miracle Project, a theater arts program for autistic kids (eventually made into the Emmy Award–winning documentary Autism: The Musical).
Copyright © Reed Business Information, a division of Reed Elsevier Inc. All rights reserved. --This text refers to an out of print or unavailable edition of this title.

“Underlying all her work and life is Elaine’s deep spirituality, her love for kids, and her respect for all. That is Elaine’s great lesson and her gift to all who read her: accept children where ever they are. Meet them there. Then, take a journey of growth and community together.”

When her son, Neal, was diagnosed with autism, former Hollywood acting coach Elaine Hall, aka Coach E, took matters into her own hands and used her resources to guide him toward an increasingly independent life. In the process, she founded The Miracle Project, a groundbreaking organization that uses the performing arts to connect with children with autism. Both controversial and unorthodox, Elaine's innovative approach has been praised by leaders in the field of autism. Now I See the Moon is a story of hope, faith, and miracles; it is a story only a mother could tell.

--Ilana Trachtman, director of Praying with Lior --This text refers to the paperback edition.

When her son, Neal, was diagnosed withautism, former Hollywood acting coach Elaine Hall, aka Coach E, took matters into her own hands and used her resources to guide him toward an increasingly independent life. In the process, she founded The Miracle Project, a groundbreaking organization that uses the performing arts to connect with children with autism. Both controversial and unorthodox, Hall’s innovative approach has been praised by leaders in the field of autism, including Temple Grandin, Barry Prizant, and Dr. Stanley Greenspan. She was also the subject of the Emmy Award–winning documentary Autism: The Musical. Hall now speaks around the country sharing her wisdom. Now I See the Moon is a story of hope, faith, and miracles; itis a story only a mother could tell.

Elaine Hall, aka Coach E, is an educator, writer, and children’s acting coach for film and TV. Her groundbreaking organization, The Miracle Project, a theater and film program for children of all abilities, was profiled in the Emmy Award–winning HBO documentary Autism: The Musical. Elaine is a keynote speaker and autism advocate throughout the United States and Canada and focuses on being “Miracle-Minded” and bringing out the best in all children. She has received hon-ors from Autism Speaks and the Autism Society of America and spoke at the United Nations for International Autism Awareness Day. Elaine lives in Santa Monica, California, with the two loves of her life: her son, Neal, and husband, Jeff Frymer.

4.9 out of 5 stars
4.9 out of 5
55 customer ratings
How does Amazon calculate star ratings?
Amazon calculates a product’s star ratings based on a machine learned model instead of a raw data average. The model takes into account factors including the age of a rating, whether the ratings are from verified purchasers, and factors that establish reviewer trustworthiness.
Top Reviews

BookFanatic
5.0 out of 5 stars Great book!
Reviewed in the United States on September 17, 2012
Verified Purchase
This book is, in my opinion, a must read for all parents, teachers, grandparents, anyone working or living with a person with Autism. Elaine captures the spirit of Neal and herself and on almost every page has a winning attitude. She explains the things she did to help Neal and the challenges she faced along the way, all the while being upbeat and positive. This book is overall a really great read and very inspirational. On those days when you just don't think you can do it anymore, pull out this book and you will have a new outlook and be refreshed and ready to tackle the next curve. Very well written, full of emotion and depth. I have recommended this book to many people and continue to do so. Great book!
Read more
2 people found this helpful
Helpful
Comment Report abuse

Tabatha Connor
5.0 out of 5 stars Amazing Book!
Reviewed in the United States on November 4, 2016
Verified Purchase
Originally, I purchased this book for a college course I am taking. However, once I began reading it, I couldn't put it down! It was such an inspiring, beautiful book. It arrived just in time and in wonderful condition. I can't wait to share this book with my friends and family!
Read more
One person found this helpful
Helpful
Comment Report abuse

Health Educator
5.0 out of 5 stars This book is for EVERYONE who deals with children
Reviewed in the United States on September 24, 2011
Verified Purchase
Do yourself a favor and buy this book. It contains Truths for dealing with all children. Elaine articulates with empathic honesty the Truth of her experience as a parent that is invaluable to us all. In the crucible of her experience trying to meet the needs of her son with autism, the insights that she gained were powerful and plentiful. For example, I was struck by her insight that children reflect our energy back to us, that what we may experience as inappropriate behavior is a means for a child to get his or her needs met. Sometimes the need is as simple as the need to be heard. I cried with inspiration and couldn't put it down.
Read more
One person found this helpful
Helpful
Comment Report abuse

Norma
5.0 out of 5 stars Help for autistic children
Reviewed in the United States on December 4, 2010
Verified Purchase
As a grandmother of a 10-year-old autistic grandson, I am always happy to read a book that will help me to interract with both him and my daughter. "Now I see the Moon" was well written, informative and encouraging to see what is being done to help and enrich the lives of those who often feel they are "throw aways." It was amazing to see what can be done through drama, story and acting. I found it hopeful and I believe every reader who has a child or grandchild within the autistic spectrum will be encouraged.
Read more
One person found this helpful
Helpful
Comment Report abuse

M.S.
5.0 out of 5 stars very real
Reviewed in the United States on February 14, 2011
Verified Purchase
I suggest it to every floor time parent. Emotionally hard to read, not because it is sad, but because it is very real to every parent with a neuro-untypical child who especially chose relationship-based approaches to help their children. This book is not about diagnoses, tags, expectations. It is about love and endless hope one can feel for another, no matter what the condition is.

If your child is in the wrong planet, you go to his planet and make him want him to come to yours. It is parents who learn and change, may be more than the kids, and it is really hard and very rewarding at the same time.

edward frymer
5.0 out of 5 stars Miracle book told with insight and love.
Reviewed in the United States on July 5, 2010
Verified Purchase
WOW!!!! Started reading this book and could not put it down. It was really well written and I can easily imagine a movie made from it. The book made me feel Elaine's hopes, despair, pains, overwhelming joy for each of Neal's successes and disappointments when things did not go as planned. Also the relevation that Neal did understand everthing that was going on around him and if he could have been able to communicate his feelings how much easier it could have been for him. That really is an important lesson for all of us.

I knew that Autism was always very hard to deal with but I never realized to what extent. Elaine's tanacity and belief in knowing to listen to her inner voices, believing in herself and conviction of doing what was best for her son was a "Miracle in itself. This book not only tells the story of her son, but bring awareness to other families with Autistic children and the community at large.
E&M FRYMER

grand mom @987
5.0 out of 5 stars Excellent
Reviewed in the United States on January 22, 2020
Verified Purchase
I brought this book as a requirement for a research paper. I enjoyed it and learned a lot about Autism.
Read more
Helpful
Comment Report abuse

NYC
5.0 out of 5 stars A Book about Miracles
Reviewed in the United States on February 1, 2012
Verified Purchase
I loved this book. I think that every parent should read it whether they have a special needs child or not. It is not just a book about how to understand and help children with special needs, it is a book that shows how parenthood is a journey of faith, hope, and charity. As adults, we often think we have to teach our children everything when in reality God is teaching us through them. The sooner we understan what it is He is wanting to teach us the sooner everyone progresses towards a more peace fulfilled life. This an inspiring book about the trials and triumphs of parenthood - about understanding the human heart and the courage to change.
Read more
Helpful
Comment Report abuse
See all reviews from the United States