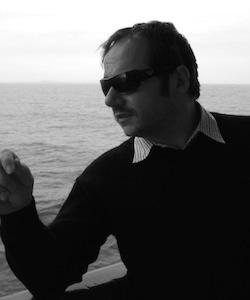 Glenn H. Mitchell studied journalism and video production before launching a career in television, producing and writing programs for the ABC, Foxtel and SBS including co-writing the first series of popular Australian comedy, Pizza. He is currently based in Sydney where he writes novels, short stories and works as a freelance scriptwriter. Nowhere is his first novel.

Start reading Nowhere (99% Human Book 1) on your Kindle in under a minute.

3.5 out of 5 stars
3.5 out of 5
12 global ratings
How are ratings calculated?
To calculate the overall star rating and percentage breakdown by star, we don’t use a simple average. Instead, our system considers things like how recent a review is and if the reviewer bought the item on Amazon. It also analyzes reviews to verify trustworthiness.
Top reviews

Gashrink
3.0 out of 5 stars An unpleasant horror story
Reviewed in the United States on July 26, 2016
Verified Purchase
It was fairly engrossing but the pattern of shifting from present to past slowed things down. The story was a bummer as things kept going from bad to worse. I couldn't relate to the character's at all . The main character kept getting paralyzed for some reason and his behavior was rather explainable. Viewed as a horror story it reminded me of the ad on TV when the teens decide to go hide behind the chain saws instead of getting into the car that's running so they could escape from the house. You want to shout at the guy "DON'T DO THAT!" Even the explanation of his initial crime years in the past makes no sense except as a plot device. Basically a totally unpleasant if rather original story
Read more
One person found this helpful
Helpful
Comment Report abuse

Micah R. Sisk
4.0 out of 5 stars A rare find and a compelling read
Reviewed in the United States on November 12, 2014
Verified Purchase
Glenn H. Mitchell's first novel, Nowhere was a surprising find for me: well-written, engagingly paced, suspenseful, and mind twisting. And though it does contain elements of the old first-contact SF trope, it's really more of a relationship tale. The story revolves around Shaun, an untrustworthy war criminal struggling with his own guilt, depression, and paranoia—greed and self-interested scheming—originally bent upon his own destruction...and an alien woman who may finally offer him salvation, or utter ruin.

Seen from our anti-hero's perspective, Nowhere echoes in tone many of the relationship-heavy writings of Philip K. Dick: the main character's mind is unstable, flicking every few paragraphs from fear, paranoia and violent intent to self-doubting hope, forgiveness, and kindness. And as with many of PKD's works, it is the female lead--the alien in this case, on a mission from a dying world—who commands the most strength of character. Yet she is also the one who brings with her the threat of deception and death—or is that all in our anti-hero's mind?

I found Mitchell's handling of internal narrative to be compelling and well-paced, though it was his adept and entertaining grasp of dialog that really first captured my attention. This is an author who knows language, knows conversation, and who writes with convincing clarity and boldness.

Completely enjoyable...with one small "but"...I did find the ending a bit abrupt. It was not wholly dissatisfactory, given the relationship-heavy angle of the book, but it was also not quite as fulfilling as it could have been.

Tony F
5.0 out of 5 stars A dark and creepy tale
Reviewed in the United States on February 6, 2015
Verified Purchase
I was thrilled, generally creeped out, and frightened by this tale. There are really only two characters in the story, but it flicks back to memories that involve others. A suicidally disturbed man heads to Nowhere to end it all, a region of space unclaimed by any of the alliances. Here he finds something, and the psychological menace just keeps climbing.

This isn't a space opera, nor a western in space, like so much scifi. There's hardly even any shooting, but the suspense builds and builds as we learn more about our hero - is he a hero or a scumbag? I won't give away any more of the plot. The ending is abrupt and unresolved, but that just makes the story more disturbing. Outstanding scifi that I found very hard to put down.
Read more
Helpful
Comment Report abuse

Malik Dauud
5.0 out of 5 stars I liked this a lot!
Reviewed in the United States on September 11, 2015
Verified Purchase
The storyline featured enough twists and thought provoking situations that I felt like I was reading a screenplay for the Outer Limits. If this story was a meal I would suggest a robust red wine to wash it down
Read more
Helpful
Comment Report abuse

Dolores Mason
1.0 out of 5 stars Hard to read
Reviewed in the United States on November 11, 2014
Verified Purchase
After two chapters of very slow movement I decided I would
Read one more and if things did not pick up up I would stop
Reading. I continued and it was somewhat interesting but
Still slow it has some moments but overall just blah.
Read more
One person found this helpful
Helpful
Comment Report abuse

Garren Jones
1.0 out of 5 stars One Star
Reviewed in the United States on January 7, 2015
Verified Purchase
was not my kind of novel.
Read more
Helpful
Comment Report abuse

Tom Flood
4.0 out of 5 stars Decree Nisi?
Reviewed in the United States on October 1, 2014
We follow Shaun on his suicide mission of self-indulgence into no-man’s space, from which he is easily lured by the option of wealth when he drifts into the path of a huge Yard (ship factory and carrier). Intent on salvage, he boards despite his computer registering an alien on the mega-craft. Instead he finds and lasers a beautiful girl, Nisi, leaves her to die so he can reap the salvage rewards alone, and returns to find her still alive. He slowly pieces together the story of the Yard since her arrival, unravelling her lies while tending to her wounded leg, getting regularly drunk and screwing. Any more would be giving away the circle of surprises in this sci-fi thriller that possibly has more in common with 'The Taming of the Shrew' than your regular space operas. Don't be put off by the classical allusion. This story is funny, bleak, and tirelessly reinvents itself with just two characters and a resident monster, the Deklar. Hard to come up with a completely new creature feature but Mitchell manages it with ease and leaves us wondering just who are the monsters in his totally engrossing first novel. 'Nowhere', just out in e-book and paperbook by Glenn H. Mitchell, definitely a new writer to watch
Read more
4 people found this helpful
Helpful
Comment Report abuse
See all reviews

Spike Spiegel
5.0 out of 5 stars Nowhere took me somewhere...deep, dark and beautiful
Reviewed in Australia on September 25, 2014
Verified Purchase
What I liked the most about 'Nowhere', was simply that it is a fantastic thriller with a post apocalyptic sci-fiction flavour.

Shaun, trying to cling on to the last tethers of his sanity and normality takes a journey into himself and through uncharted space. What he finds is more than enough for me to classify Mitchell's book as a crushing sci-fi horror; not so much as a whodunnit but what.

Maybe he was just lazy or maybe he just knew how to hit the nail on the head because unlike other sci-fi stories, Mitchell's novel has no funny alien names like 'Fjkldjaagnndgas' or planets called 'Mnmcaldkqweopipwi'. He skipped the bulls*** and perhaps that was why I found the read so digestible.

For the first time in a long time, I read a sci-fi story that was not a space opera akin to 'Star Wars' or an intergalactic 'Lord of The Rings'. If I had to draw a similarity to a film, Ridley Scott's 'Alien' immediately comes to mind (in vision but not in plot). It was also laced with humour, but from a dark scalpel that prodded but never maimed. All through the novel I felt an impending sense of dread, like a doom clock counting down roping me in more and more with the protagonist.

Overall, an excellent and riveting read. I look forward to more of his stuff.
Read more
Report abuse
See all reviews