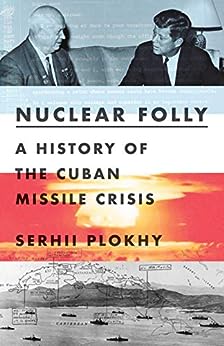 "The story is extraordinary, and Plokhy is an accomplished narrator.... This account is probably as authoritative a version of the Soviet side as we are likely to get."
― Max Hastings, Sunday Times (UK)

"A magisterial work based on a bevy of U.S. and Soviet archival sources, including previously classified KGB documents. The perspective Plokhy provides exposes the perverse incentives that fueled dangerous nuclear power plays during the Cold War and, he suggests, beyond."
― Andre Pagliarini, New Republic

"What makes this the definitive history is Mr Plokhy’s telling of the tale in gripping detail from the Soviet perspective.... It is the picture Mr Plokhy paints of the complete failure of the key decision-makers to get inside the minds of their counterparts that is most telling.... With his masterly book, Mr Plokhy has sounded a warning bell."
― The Economist

"Nearly sixty years after the Cuban missile crisis, Serhii Plokhy, the author of multiple groundbreaking books on Soviet history, once again uses newly released KGB archives to offer a new perspective: In gripping, granular detail, he shows us just how close the United States and the Soviet Union came to Armageddon. At a moment when nuclear technology is still spreading, Nuclear Folly reminds us of the danger we all still face."
― Anne Applebaum, winner of the Pulitzer Prize and author of Twilight of Democracy: The Seductive Lure of Authoritarianism

"If you think the story of the Cuban missile crisis has been told so often that nothing remains to be learned, think again! Drawing on KGB documents preserved in Ukrainian archives and Soviet military memoirs, as well as American documents and Cuban materials, Serhii Plokhy’s almost hour-by-hour account freshly illuminates mistakes by the Kremlin and the White House that triggered the crisis and snafus at sea and in Cuba that almost sparked a nuclear war, while drawing ominous lessons for our own once again hair-trigger nuclear age."
― William Taubman, winner of the Pulitzer Prize and author of Gorbachev

"An excellent overview of the Cuban missile crisis from one of America’s leading Cold War historians. Serhii Plokhy has mined previously untapped Soviet archives to shed new light on the thirteen days that brought the world closer than ever before to nuclear destruction, and the pivotal roles of John F. Kennedy and Nikita Khrushchev. A thrilling read that justifies his sobering conclusion: we may not be so lucky next time."
― Michael Dobbs, author of One Minute to Midnight: Kennedy, Khrushchev, and Castro on the Brink of Nuclear War

"Riveting.... [An] excellent re-creation of events.... A timely reminder of a danger we must still live with today."
― BookPage

"A fresh examination of the historical milestone.... Plokhy keeps the pages turning, and he includes far more Soviet material than earlier scholars.... Far from the first account but superbly researched and uncomfortably timely."
― Kirkus, starred review

"Paint[s] a clearer picture of the behind-the-scenes machinations, the motivations, the politics, and the errors in judgment that almost brought about a nuclear holocaust. Plokhy pulls it all together with sober yet accessible prose that reads like a suspenseful thriller. For anyone interested in the Cold War, this is an indispensable read."
― Booklist, starred review

"This important, absorbing work shows that the full story of the Cuban Missile Crisis must be told from its global perspective."
― Library Journal, starred review --This text refers to an alternate kindle_edition edition.

Serhii Plokhy, Mykhailo S. Hrushevs'kyi Professor of Ukrainian History and director of the Ukrainian Research Institute at Harvard University, is a leading authority on the history of the Cold War. He lives in Burlington, Massachusetts. --This text refers to an alternate kindle_edition edition.

Michael
5.0 out of 5 stars Demonstrates how Khruschev was more driven by morality in the crisis than Kennedy
Reviewed in the United States on May 5, 2021
Verified Purchase
This book made me feel a new respect for Nikita Khruschev, who already deserves great praise for his unwavering repudiation of Stalinism.. Although the conventional summary of the Cuban missile crisis is that "Khruschev blinked" he in fact showed a genuine desire for world peace, or at least avoid world war while Kennedy seemed perfectly willing to accept the deaths of millions of Americans, Russians and others, as long as American prestige - and his own - were not undermined. The book shows that Kennedy was primarily driven by political considerations, Krushchev to avoid war. Further, the book shows that it was Khruschev who was morally in the right in that putting missiles in Cuba was no more than a very reasonable counter move to the U.S. placement of nuclear missiles in Turkey. Further, not only did the U.S. start it, but Khruschev had an additional moral argument for installing nuclear missiles in Cuba - to protect the island from a SECOND U.S. backed invasion. By contrast, the Soviet Union never attacked or even seriously threatened Turkey. In short, this book demonstrates yet again that although some Soviet leaders - primarily Lenin and Stalin - were indeed souless mass murders, others, such as Beria, Gorbachev and Khruschev were surprisingly idealistic people willing to risk their careers and, in Beria's case, his life, to do the right thing.
Read more
Helpful
Report abuse

Michael Griswold
5.0 out of 5 stars A Most Serious Folly
Reviewed in the United States on April 13, 2021
***I received an electronic galley from netgalley.com and the publisher for reviewing purposes***

Nuclear Folly is Serhii Plokhy’s reexamination of the Cuban Missile Crisis on the grounds that many nations are leaving previously established nuclear weapons protocols and making noises about acquiring or using nuclear weapons as though such threats are just another tool of foreign policy. We need to remember just how volatile the Cuban Missile Crisis was and just how close so many of us came to not even being on the planet. Fear was a big motivator in how the crisis got amped up to such a dangerous place as neither side really had an accurate read on the other sides intentions or perspective.

What’s special about Nuclear Folly as opposed to other accounts is that Plokhy is able to bring in the American side, the Soviet Side, and the Cuban side. This gives the reader a fuller picture as opposed to just looking at the American perspective. Much of the Soviet/Cuban stuff is brand new to me. The reader learns of the concerns within the Soviet decision-making apparatus about putting missiles in Cuba or Castro’s feelings of being double-crossed by his Soviet “allies” in the aftermath.

I think that Nuclear Folly gives the reader a far more nuanced and complete picture of what happened. It’s also a fairly easy read as it reads more like a thriller than an academic history, which is great because people really need to understand why we cannot be so cavalier about the use of nuclear weapons. Hopefully Nuclear Folly can serve as that reminder.
Read more
2 people found this helpful
Helpful
Report abuse

The View
VINE VOICE
4.0 out of 5 stars Good Blow by Blow Account of Cuban Missile Crisis
Reviewed in the United States on April 29, 2021
This is a fast paced, blow by blow account of the Cuban Missile Crisis with respect for all participants. It contains some new information also.
Read more
Helpful
Report abuse
See all reviews