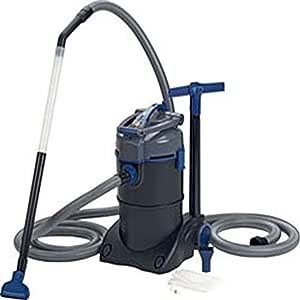 Brand: OASE
4.2 out of 5 stars 360 ratings
Available at a lower price from other sellers that may not offer free Prime shipping.

Oase Pondovac 4 Pond Vacuum Cleaner. Do not operate or leave the unit in the rain.Easy to clean

4.2 out of 5 stars
4.2 out of 5
360 global ratings
How are ratings calculated?
To calculate the overall star rating and percentage breakdown by star, we don’t use a simple average. Instead, our system considers things like how recent a review is and if the reviewer bought the item on Amazon. It also analyzes reviews to verify trustworthiness.

DW
5.0 out of 5 stars Works great!
Reviewed in the United States on April 26, 2017
Verified Purchase
I purchased this to replace an 11 year old Oase Pondovac 3. The Pondovac 3 is still working. I was afraid it might go this season, so I ordered the Pondovac 4. I am not disappointed!! It has more power than the 3. The set up is the same with some minor updates. We have been using the old one for 11 years on 2 large ponds and 1 hot tub. This one will have no problem keeping up! I have Large Oak and Maple trees in the Yard, and that means lots of LARGE oak and maple leaves in the pond. The Pondovac 4 is up to the challenge. The small bag that is included, that you attach to output hose if you want to recycle the water back into the pond is a waste of time for me. This was a easy fix a few years ago. Any large mesh bag that you can tie over the end of the hose will work. I ordered 2 mesh laundry bags from amazon and that work like a charm. They can hold a ton!!
I am looking forward to getting at least 10+ years from the Pondovac 4
Whitmor 6154-111 Mesh Laundry Bag, White Pack of Two
Read more

Tog
4.0 out of 5 stars Excellent product so misunderstood
Reviewed in the United States on October 11, 2014
This product is expensive enough that people seem to expect a miracle. You won't find it here, but it will cut down considerably on the effort to keep a pond in good working order. The documentation that comes with the device is horrible, obviously never having been subjected to any testing on real people whatsoever. The most important omission is that they left out any mention of how the cleaner works, resulting in a whole bunch of nasty reviews by people who just didn't get what was going on. So here's what's going on:

The cleaner has two holding tanks inside. When you start it, what I'll call Holding Tank One is in use. Water and fine debris is lifted from the bottom of the pond into the holding tank, with the vacuum pump drawing air out of the top of the tank in the manner customary with wet/dry vacuums.

When a float switch in the tank reaches a certain level, it triggers an unique sequence: The vacuum action stops dead in its tracks for a few seconds (leading to all the negative reviews). Two valve switches occur. The first one switches the vacuum pump over to Tank Two, currently empty. The second one opens a port allowing the water to flow out of Tank One. The pump goes back into action, now emptying water and debris into Tank Two while Tank One drains out the exhaust hose. When Tank Two is full, the cycle repeats.

Without this cycling, using this device would be like using any wet/dry vacuum: In less than a minute, the tank would be full and it would be time to shut down and manually empty it. The two-tank scheme lets them approach continuous up time without the user having to tip the vacuum over ever to empty it. This would work perfectly if they bothered to tell people what was going on. Instead, people are assuming something is going wrong once a minute or so when the vacuum action seems to stop for several seconds before resuming.

The instructions also talk about the general-purpose head to be attached to the wand. I've used a lot of different kinds of vacuums in my life, but never have I seen a more specialized head on any cleaner. it is not even close to "general purpose," but it is remarkably useful: Attach it so the slot is facing up and push it forward into the goo. The goo mixes with a bit of water, lifts up slightly, and gets drawn right into the vacuum before it can escape and cloud your water.

Know when to quit: It's a pond, not a bathtub. There will be new dust settling into it tomorrow. If you strive for perfection, you'll end up frustrated. You need to draw in all the silt that's almost the same weight as water; that's what stirs up and clouds your pool. The general purpose tool will do that. If there are some heavy particles left behind, leave them for next time.

Finally, as others have pointed out, this is not the right tool for general debris, like entire leaves and twigs. Use a fine-mesh pool net before starting. This vacuum will do a fine job with fine silt, and that's what clouds our ponds.

This is a really good product, but the company needs to get its act together. All they have to do is get one person who has a pond and is of normal intelligence, sit him or her down with an unopened box, and watch him or her crash and burn. You'd think with some of the reviews they've gotten, they'd do something about the product, and maybe they will before they drive themselves out of business.

Jeff B. Erwin
5.0 out of 5 stars I love this thing!
Reviewed in the United States on March 27, 2017
Verified Purchase
I love this thing. I was going to use a shopVac to clean out my pond, knowing that it was just going to suck all the water out and be a complete pain in the ass to empty. I saw this thing and immediately ordered it. It arrived that night. How do they do that??

It was very easy to assemble, the instructions were sparse but really didn't need much more detail. There is one part I am still not sure about, looks like a cap for something. The rest of it want together in about 10 minutes.

I took it out to the pond (about 4000 gallons) and went to work. It uses very little water, I had it dumping junk onto the lawn. It was pulling big chunks of half-dead algae off the bottom without problems. It seems to be what I think of as an 'inhale/exhale' machine. It has two chambers inside, and when the intake chamber gets full it pauses for less than a second and pumps it all into a second chamber where it is then barfed out the exit tube and onto the lawn. The pause might make some people think it is malfunctioning, but reading these comments and the review or two out there clears this up. It works very well.

It doesn't have the suction of a shopvac, but as a result it doesn't take a lot of water out of the pond. After using it for 15 minutes the pond level was down about an inch. The shopvac would have emptied the pond in that amount of time. It did, as a result of the lower 'suck' capability struggle with the occasional maple leaf at the bottom, it wasn't able to pull hard enough to break the leaf and suck it in, but it had no problem with huge chunks of string algae which is more malleable.

After using it for 45 minutes I took the head off to see what kind of mess I had inside to clean up. To my pleasant surprise there was zero that needed to be cleaned. There wasn't anything on the two filters inside protecting the vacuum system, surprising because the pile of crap on the lawn that this thing pulled out of the pond was huge. I suspect it pulled 10 lbs of crud out of the pond, and the inside of the system was a clean as a whistle.

I love this thing. It is going to make maintenance this summer a breeze.

And I managed to NOT suck up any of the Koi in the pond. They were smart enough to stay out of the way.
Read more
47 people found this helpful
Helpful
Comment Report abuse
See all reviews

Diana Wieler
5.0 out of 5 stars Exactly what is needed for continued pond maintenance
Reviewed in Canada on November 7, 2020
Verified Purchase
This product has been working perfectly and we will continue to use it throughout the upcoming season. We have a large pond (8,000 gallons) and it would cost a fortune to have it professionally cleaned once or twice a year. The different heads (ie. for string algae and other purposes) are a real plus
Read more
Report abuse

Bruce Grayson
4.0 out of 5 stars Great Response from Vendor.
Reviewed in Canada on May 17, 2020
Verified Purchase
Instructions were pictorial and not that easy to understand. Written Instructions for assembly were in small print. Otherwise works fine.

Denis
1.0 out of 5 stars GARBAGE!
Reviewed in Canada on June 20, 2020
Verified Purchase
This thing is utterly useless. It has very poor suction. Water moves up the hose at about 1 inch every 10 seconds. Suction stops every few minutes and I have to empty the water from the hose to get it working again. What a waste of money.
Read more
Report abuse

Daniel Tavares
2.0 out of 5 stars Two Stars
Reviewed in Canada on September 27, 2018
Verified Purchase
Not exactly what I expected. For the cost of unit, not worth iy.
Read more
One person found this helpful
Report abuse
See all reviews

Page 1 of 1 Start overPage 1 of 1
This shopping feature will continue to load items when the Enter key is pressed. In order to navigate out of this carousel please use your heading shortcut key to navigate to the next or previous heading.
Back
Next
Pages with related products. See and discover other items: koi pond, algae cleaner for fountains, garden ponds, outdoor ponds, pond filters for koi ponds, pool discharge hose