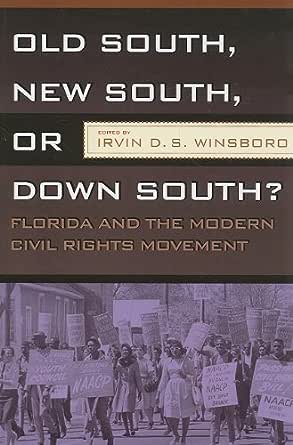 Flip to back Flip to front
Audible Sample Playing... Paused   You are listening to a sample of the Audible narration for this Kindle book.
Learn more
ISBN-13: 978-1933202440
ISBN-10: 1933202440
Why is ISBN important?
ISBN
This bar-code number lets you verify that you're getting exactly the right version or edition of a book. The 13-digit and 10-digit formats both work.

"Local histories, based on research in grass-roots communities, often challenge the stereotypes we have been taught. These superb essays explode the myth of Florida as an 'exceptional' state noted for its 'moderation' in race relations. Instead, they show vividly the degree to which racism-and black resistance-were as endemic to Florida as they were to Mississippi. Winsboro's book is a powerful tribute to the long history of black struggle in Florida, the entrenched barriers that had to be overcome, and the effectiveness of historians of Florida in revealing the truth of the state's past." William H. Chafe, Alice Mary Baldwin Professor of History, Duke University

"These thoroughly researched and well-written essays directly challenge the conventional wisdom that Florida followed a more moderate form of Jim Crow than its southern peers. This collection chronicles the agonizing history of segregation and repression in the state, and demonstrates conclusively that only after long and persistent struggles by African-Americans at the community level and intervention by the federal government was Florida finally forced to modify its resistance to civil rights reform. By reconceptualizing the struggle for civil rights in Florida, this book also advances the national project of rewriting America's racial history." Ronald L. Lewis, Stuart and Joyce Robbins Chair and Professor Emeritus of History, West Virginia University

"This collection of authors-all either Florida natives or professors in the state-outlines the contours of an interplay of repression and liberation that enriches the understanding of past battles (in curriculum, work, law, and public space) and provides context for those battles in the nation that are yet to be waged." Stephanie Y. Evans, "The Journal of American History"

"This is revisionism as it's meant to be: careful research that examines a major issue and as a result fundamentally changes how we think about something we thought we knew. It will be an important, much cited, and respected book." John B. Boles, Professor of History, Rice University and Editor, "Journal of Southern History"

"This study stikes a serious blow at the misperception of Florida's progressive past by examining its civil rights history. In this vein, it provides enriching essays that shed more light on the Jim Crow era and civil rights movement in Florida and places the Sunshine State in its proper historical place alongside other deep South states like Mississippi, Georgia, and Alabama." David H. Jackson, Professor of History & Chairman of Department of History, Political Science, Public Administration, Geography and African American Studies, Florida A&M University --This text refers to the hardcover edition.

How does a state, tarnished with a racist, violent history, emerge from the modern civil rights movement with a reputation for tolerance and progression "Old South, New South, or Down South?: Florida and the Modern Civil Rights Movement" exposes the image, illusion, and reality behind Florida's hidden story of racial discrimination and violence. By exploring multiple perspectives on racially motivated events, such as black agency, political stonewalling, and racist assaults, this collection of nine essays reconceptualizes the civil rights legacy of the Sunshine State. Its dissection of local, isolated acts of rebellion reveals a strategic, political concealment of the once dominant, often overlooked, old south attitude towards race in Florida. --This text refers to the hardcover edition.

Irvin D.S. Winsboro is professor of history, African-American Studies, and Florida Studies at Florida Gulf Coast University. He is the author Feminism and Black Activism in Contemporary America: An Ideological Assessment, and numerous other works and articles.