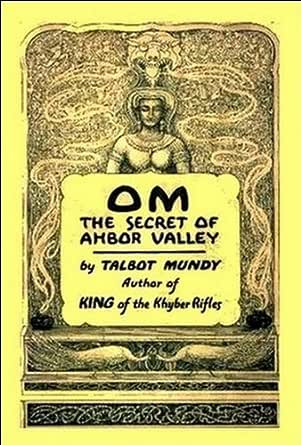 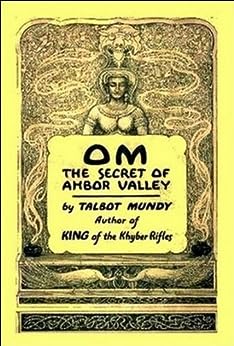 3.8 out of 5 stars
3.8 out of 5
18 customer ratings
How does Amazon calculate star ratings?
Amazon calculates a product’s star ratings based on a machine learned model instead of a raw data average. The model takes into account factors including the age of a rating, whether the ratings are from verified purchasers, and factors that establish reviewer trustworthiness.

David S. Wellhauser
4.0 out of 5 stars Brilliant Late Imperial Adenture Fiction -- with a Mystical Twist
Reviewed in the United States on July 3, 2014
Verified Purchase
Om, The Secret of Ahbor Valley was originally published in 1924. This is an excellent example of British, Late Imperial Adventure fiction. The twist Om offers, however, is it has a minor mystical element. Most of the book is concerned with Cottswold Ommony’s search for the Ahbor Valley and his experiences along the way—as well as the characters he meets on this quest.

What is interesting about Mundy now, is not the stories themselves—though fun they are run-of-the-mill early 20th Century adventure fiction—but the window the stories and books offer on Late British Imperialism, especially as this manifested itself in India.

The casual reader, however, should brace themselves for the imperialist perspective on the ‘native/indigenous peoples’. While Mundy’s racism is mild by comparison of, say, Ian Flemings’ [see Flemings’ James Bond series] it is pronounced by today’s standards. This doesn’t mean modern readers will not enjoy Mundy’s work, but it does mean the reader should prepare themselves for racial and cultural attitudes that are not acceptable today. Again, these attitudes are not as blatant as those of others writers and should not interfere, greatly, with the reader’s pleasure—if they keep the above proviso in mind.

The middle section of the book drags a bit, feels a bit overly long, but this may be because the reading sensibilities of the pre-internet and pre-television age are dramatically different from those of today.

Note: The reviewer read the Kindle eBook version of this book. The book was well formatted and easy to navigate through.

For those interested in learning more about Talbot Mundy, they should check out his Wikipedia page. Mr. Mundy led an interesting and unconventional life, which fed into his fiction and his perspective on the world.

Timothy L. Randall
1.0 out of 5 stars Om is dull. Granted
Reviewed in the United States on May 19, 2017
Verified Purchase
As an adventure novel, Om is dull. Granted, Mundy is a hell of a wordsmith but where in the action? The characters are well drawn and alive but they don't do anything until three fourths way through the book. Some critics consider "Om" Mundy's Magnum Opus. I do not. "King of the Khyber Rifles is a much better read." And yes I do "get it" Theosophy and Buddhism aside, it's damn dull. As the old saying goes, "If I wanted a message I'd read a fortune cookie." Great cure for insomnia. Been a long time since I've read a major work by an author I hated as much as this book.
Read more
Helpful
Comment Report abuse

Barbara S
5.0 out of 5 stars Wonderful, Mystical and Exciting
Reviewed in the United States on January 27, 2016
Verified Purchase
One of my very favorite books. If you are looking for an adventure that is mystical, thoughtful and exciting, read this book. It is a combination of The Raiders of the Lost Ark and Kim (by Rudyard Kipling). It is one of the few books that I could not put down. It was written in the early 1920's and tells the story of a British civil servant who goes off in search of his long lost sister-in-law who vanished years before in northern India. The plot also includes a mystical piece of jade, a very wise lama and a mysterious apprentice lama. The writing is intelligent. I like this Kindle edition as it has some footnotes that explain some of the references that are no longer common.
Read more
One person found this helpful
Helpful
Comment Report abuse

Paul Clark
5.0 out of 5 stars Still a classic
Reviewed in the United States on September 22, 2013
Verified Purchase
I read this work many years ago and now after rereading it I'm more impressed than ever of the author 's ability to paint vivid and memorable characters and still narrate a moving , exciting and uplifting story. It was both entertaining and inspirational. It motivated me to go back and give a review of all of Mundy's work!
Read more
One person found this helpful
Helpful
Comment Report abuse

Randy Mack
4.0 out of 5 stars Interesting tale in a truly mysterious location.
Reviewed in the United States on September 9, 2014
Verified Purchase
An interesting real life adventure story. It drags a bit at times but that's just a measure of its comprehensiveness
Read more
Helpful
Comment Report abuse

Amazon Customer
5.0 out of 5 stars The world of Talbot Mundy
Reviewed in the United States on January 14, 2013
Verified Purchase
Talbot Mindy takes you to the world of colonial India, a place of extraordinary characters and complex intrigue. The larger than life hero is on a quest for understanding and to right a perceived wrong.
This author has written so many adventure novels it is surprising that he is not more acclaimed.
Read more
Helpful
Comment Report abuse

Miles Standish
5.0 out of 5 stars Five Stars
Reviewed in the United States on January 30, 2017
Verified Purchase
My favorite book of all time! A spiritual novel which I first read about 1945.
Read more
One person found this helpful
Helpful
Comment Report abuse
See all reviews from the United States

Rubedo
4.0 out of 5 stars Unusual spiritual Novel - A world gone with time - India during the 1900-1930 period
Reviewed in Germany on July 16, 2014
Verified Purchase
It is a narative of an unusual English man in India - giving insights into a way of life within the British service in India around the 1920... I enjoyed the novel - mostly because it exudes a certain calmness and has some gems of wisdom spread in it from a Tibetian lama who is most of the time an enigma in this novel. Some parts of the story became quite repetetive or foreseeable... but the last chapters were definitely worth going through the entire experience. All in all I love old stories with some spiritual content and this had me captured for moments. Not the best novel of this type of genre but very enjoyable with interesting historical inisghts of a certain type of character which I miss in the modern world - sometimes. I love as well that it gives a word how the Western world looked from an Oriental standpoint... something the West often foregets. It brought a possiblity through which I enjoy musing - what if the presence and enthusiasm of the Western world would come together with the eternal wisdom of the East? What if we serve the higher love instead of self-interest...? As for some individuals live it beautifully already...
Read more
Helpful
Sending feedback...
Thank you for your feedback.
Sorry, we failed to record your vote. Please try again
Report abuse