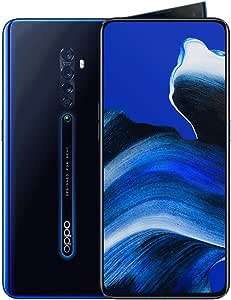 Brand: OPPO
4.6 out of 5 stars 210 ratings
Available from these sellers.

For USA Buyers : This Smartphone is compatible/will work with CERTAIN GSM Networks ONLY. For exact 2G GSM, 3G and 4G/LTE compatibility, please check with your network provider in advance prior to your purchase. This phone WILL NOT WORK with any CDMA Networks such as VERIZON, SPRINT, US CELLULAR and T-Mobile.

4.6 out of 5 stars
4.6 out of 5
210 global ratings
How are ratings calculated?
To calculate the overall star rating and percentage breakdown by star, we don’t use a simple average. Instead, our system considers things like how recent a review is and if the reviewer bought the item on Amazon. It also analyzes reviews to verify trustworthiness.
Top reviews

AsheDJ
5.0 out of 5 stars A very unique device!
Reviewed in the United Kingdom on June 17, 2020
Color: Luminous BlackVerified Purchase
This phone is immediately different from a lot of other phones out there, which is obviously its uninterrupted display and shark fin motorized front-facing camera.

- ColorOS can be hard to navigate within the settings menu
- No 5G support, not that this is important with a lack of coverage
- No native dark mode, but it is expected with Android 10 and ColorOS 7
- No stereo speakers, just a single down-firing speaker
- Display is 60Hz

The phone is running smoothly without stuttering with opening apps despite not being the latest flagship CPU. It will run all games without issue with the Snapdragon 730G and 8GB RAM. The device quickly unlocks to the desktop via passcode, in-display fingerprint sensor, or face recognition via the Shark Fin front-facing camera. The AMOLED display is very bright with vibrant colours and can be seen perfectly in bright and sunny conditions. I do not remember how much memory was available taking into account of the space used by Android, but it should be about 230GB - 244GB at least for you to use for games, apps, TV shows, films, audiobooks, and photos. I am a heavy user of a phone, and on a single charge, the 4000Mah battery has lasted more than a single day, in fact, at the time of this review, the battery was last charged 1 day, 2 hours and 37 minutes prior, and still has 43% remaining, which the phone predicts to be another 13 hours and 55 minutes before needing another charge. The setup of the phone is very simple and if you have had Android before then you know the procedure. It will ask for a Google account, and if you have previous Android phones, it will ask if you want all your apps downloaded automatically. It is an effortless process, and even so, if you are a new Android user, it will explain how to setup the device. On a final note, you will likely experience a few apps crashing upon the first use on your new device. This is normal and should not happen again if the app is stable.

Alfonso
5.0 out of 5 stars Outstanding value for a high end product.
Reviewed in the United Kingdom on June 27, 2020
Color: Luminous BlackVerified Purchase
Oppo are not one of the more popular Western brands, but my word these handsets offer you so much more bang for your buck than you would get from any iPhone or Samsung! They are a huge well established Asian company. I had the 1st series Reno but wanted to upgrade to this. Looks and feels like a high end product with high end features to boot. Oppo are slowly making their way into the UK market and I'm enjoying their products before they become to well known here and start overpricing their items like the main two. Anyone in doubt about buying, don't! It's unique, it has full uninterrupted display. Great cameras. Fantastic battery life and smooth functionality. You will wonder why you ever wasted so much money on an iPhone or Samsung after this.
Read more
17 people found this helpful
Report abuse

Stuart Alexander
5.0 out of 5 stars Fantastic mid-range phone with some high end feature's
Reviewed in the United Kingdom on July 8, 2020
Color: Luminous BlackVerified Purchase
I bought this phone as a stand in whilst my Mate 20 Pro is away for repair.

I can honestly say I am very surprised with the overall experience.

Design is beautiful, very well made and comes with a proper screen protector installed and quite a nice case in the box.

Performance is very good, normal use it is very nippy with no lag. Gaming seems fine, Asphalt 9 is very fluid and Fortnite runs smoothly on medium.

Cameras are also very good, certainly better than what I was expecting.

As an enthusiastic smartphone owner I can highly recommend the Reno 2 and if I didn't have my Mate 20 Pro coming back I'd happily stick with this.
Read more
7 people found this helpful
Report abuse

Fahad Ahmed
5.0 out of 5 stars Oppo's most underated phone!
Reviewed in the United Kingdom on August 1, 2020
Color: Luminous BlackVerified Purchase
This device is a testament of how well the mid ranger devices have matured over the years. Even though it has a 730G chipset, I have never noticed any UI lags whatsoever. The camera quality is excellent in daylight and commendable in low light if you've steady hands (there is always gcam for those scenarios). The Dolby Atmos tuned audio is crisp and great for media consumption, especially over a nice pair of Hi-Fi cans. The screen get very bright and is legible in direct sunlight, the colors pop and HDR content looks superb on this notchless screen. The design of the device is unique and the weight distribution is great as well.

I came into this device from two previous Huawei phones, hence my expectations of battery life will always be high and this device seemed quite average in this regard to me. A 10-12 hour day with a lot of continuous gos tracking over 4G, frequent use of the cameras for phots as well as videos and some social media was enough to drop the battery to lower 20% from 100% (I may sound harsh but my 2 year old Mate 10 lite would still be at 30-35% with such usage). My battery life was worse initially, but once I identified the culprit running in the background (Google and some of it's pesky services), I could limit it's background network usage and the battery life became much, much better.

I would recommend this device to anyone who is an avid consumer of media, likes having a snapy device even during multitasking, wants to take great photos in daylight and some photography during the night. I got this device on a crazy deal at £269 as at that price range, nothing even comes close to the wholesome package that this device possesses!
Read more
4 people found this helpful
Report abuse

LM
5.0 out of 5 stars I'm pleased with the performance
Reviewed in the United Kingdom on July 10, 2020
Color: Luminous BlackVerified Purchase
Great phone. I have a Huawei Mate 20 Pro and it's working great, but I need 2 SIM cards. I bought this Oppo Reno 2 and I'm pleased with it. The performance is similar to the Mate.
Read more
5 people found this helpful
Report abuse
See all reviews