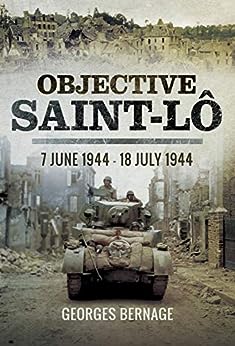 by Georges Bernage (Author) Format: Kindle Edition
See all formats and editions
Sorry, there was a problem loading this page. Try again.
Read more Read less
Previous page
Next page
Due to its large file size, this book may take longer to download

A very complete presentation of the Omaha fights Beach at the liberation of Saint-Lô.
VaeVictis

"As you follow the soldiers who wrote the memoirs and their close comrades, you get a sense of the hedgerow carnage on both sides, especially with the tally of individuals killed in action and wounded in action numbers."
Historical Miniatures Gaming Society --This text refers to the hardcover edition.

The historian Georges Bernage is one of France's premier experts on the 1944 Normandy Invasion. He has published over forty books on the subject since 1978. --This text refers to the hardcover edition.

Donna Burns
5.0 out of 5 stars My dad was there. Served in WWII
Reviewed in the United States on March 12, 2019
Verified Purchase
Great summary of the the battle.
Read more
Helpful
Report abuse

Gilberto Villahermosa
4.0 out of 5 stars A Very Good Book Worth the Money!
Reviewed in the United States on October 6, 2017
French historian George Bernage is a superb historian of the Normandy campaign - and especially of the German forces. This book is well researched, well illustrated - with dozens of black and white and color photos, maps, and illustrations - and very well written. I especially appreciated the interviews with German veterans. Bernage provides insight into not only the critical Battle of St. Lo, but also the battles leading up to it, such as the Battle of Hill 192. The latter is the reason I purchased this book. I highly recommend this book to anyone interested in the Normandy Campaign, the Battle of St. Lo, and the German Fallschirmjager formations - the Wehrmacht's most elite infantry during the Normandy campaign - that took part in the battle.
Read more
6 people found this helpful
Helpful
Report abuse

Mark Cunningham
5.0 out of 5 stars Great book with new info.
Reviewed in the United States on July 26, 2019
A few mistakes ,but minor . One referring to the 35th division calling it the 39 th. Some times confusing unit designations. 137th IR or 3/137 first is German second is US. Great personal discriptions of the fighting from hard to obtain sources or very expensive books,or non translated ones. A very good book ,plenty of photos from both sides.
Read more
Helpful
Report abuse
See all reviews

J. Barry
4.0 out of 5 stars Excellent Addition to Normandy Campaign books.
Reviewed in the United Kingdom on July 5, 2017
Verified Purchase
At last! I've long been a fan of Normandy publishers Heimdal who've been publishing quality works on Normandy for a long time,sadly most of which other than those about D-Day are available only in French.All their books are very useful when touring the battlefield,containing first-hand accounts from returning veterans & local civilians often not published in English,along with excellent then and now comparison photos,and good quality maps.This is no exceptionJust about the whole campaign has been covered over the years,and while I can just about get by in French,I'd much prefer to read in my native language.
So Well Done Pen & Sword for taking up the gauntlet,and this is a very good start,remaining faithful to the French edition in layout and number of photographs.About 4 or 5 have been removed but are of no great importance.
One of the curious things about the American battle in Normandy is that apart from the D-Day phase,how few books ( compared to the British & Canadians ) apart from the official & rather dry divisional histories have been published,especially on the war in the hedgerows and battle for St.Lo.This a must for those interested.The eye-witness accounts are largely but not exclusively based on a 29th U.S Div Lieutenant.& a German para,adding the human dimension & personal detail to the beautifully illustrated narrative.
While not comprehensive( i,e not much coverage of the 2nd or 35 US Divisions ) it is still an excellent addition to the English language books on the battle of Normandy.
While Heimdal have now published a couple in translation themselves,( Three Days In Hell & Corridor Of Death ) they can be a bit clunky.Other than a few minor glitches in editing this is a good translation,which anyone interested in the campaign will read with profit.
So,thanks Pen and Sword - and with Battle of the Odon, and Battle of the Cotentin already in the pipeline,I for one can't wait for them.
Then,I'd like Hill 112,Caen,Goodwood,Villers Bocage,Falaise,La Haye Du Puits & Cobra please!