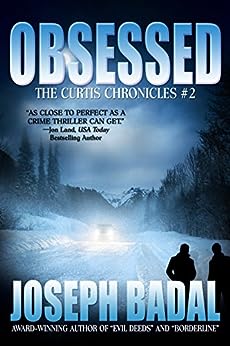 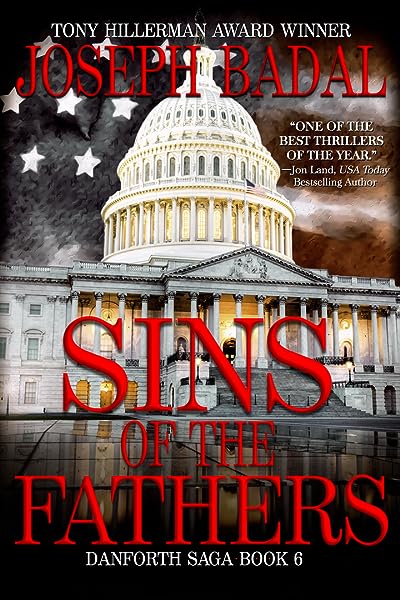 by Joseph Badal (Author) Format: Kindle Edition
Book 2 of 3: The Curtis Chronicles
See all formats and editions
Sorry, there was a problem loading this page. Try again.
A world-class thriller with non-stop, heart-pounding tension and action, “Obsessed” brings back Matt Curtis and Renee Drummond and their villainous nemesis, Lonnie Jackson. This second installment in Joseph Badal’s The Curtis Chronicles takes the reader from Rio de Janeiro to the mountains of New Mexico to the Mexico/United States border, following a crazed Jackson on his single-minded quest for revenge against the two people he blames for the deaths of his mother and brother and for the destruction of his criminal empire in Hawaii.

“Obsessed” is another master stroke of fiction from this Amazon #1 Best-Selling Author, two-time winner of the Tony Hillerman Award for Best Fiction Book of the Year, and three-time Military Writers Society of America Gold Medal Winner.

If you like fast-paced stories that put you on a breathless, adrenaline-filled journey, with realistic good guys and believable bad guys, “Obsessed” will have you begging for more.

“ ‘Obsessed’ is a flat-out fantastic, eighteen-wheeler of a thriller driven by a dynamic plot and barreling through anything in its way. Joseph Badal has crafted a tale as elegant in execution as it is novelistic in its three-dimensional characters, good guys and bad who are equally driven from the point the last entry in Badal’s Curtis Chronicles leaves off. It’s easy to obsess about ‘Obsessed,’ because it follows all the rules of great thriller writing, while making up a few of its own. A must read for all hardcore fans of the genre.”
—Jon Land, USA Today Bestselling Author of the Caitlin Strong Series
Read more
Previous page
Next page

Prior to a long finance career, including a 16-year stint as a senior executive and board member of an NYSE-listed company, Joseph Badal served for six years as a commissioned officer in the U.S. Army in critical, highly classified positions in the U.S. and overseas, including tours of duty in Greece and Vietnam, and earned numerous military decorations. He holds undergraduate (Temple University) and graduate (University of New Mexico) degrees in business and graduated from the Defense Language Institute, West Coast and from Stanford University Law School's Director College. Joe now serves on the boards of several companies. He is the author of 15 published suspense novels, including 6 books in The Danforth Saga series, 3 books in the Lassiter/Martinez Case Files series, 3 books in the Curtis Chronicles series, and 3 stand-alones. His books have won multiple awards, including 2 Tony Hillerman Awards, 3 Gold Medals from Military Writers Society of America, the Eric Hoffer Award, and Finalist Honors in the International Book Awards contest. He also writes a blog titled Everyday Heroes, and has written short stories published in the "Uncommon Assassins," "Someone Wicked," and "Insidious Assassins" anthologies. Joe has written dozens of articles that have been published in various business and trade journals and is a frequent speaker at business, civic, and writers' events. To learn more, visit his website at JosephBadalBooks.com. --This text refers to the paperback edition.

Joseph Badal grew up in a family where story-telling had been passed down from generation to generation.

Prior to a long finance career, including a 16-year stint as a senior executive and board member of a NYSE-listed company, Joe served for six years as a commissioned officer in the U.S. Army in critical, highly classified positions in the U.S. and overseas, including tours of duty in Greece and Vietnam, and earned numerous military decorations.

He holds undergraduate and graduate degrees in business and graduated from the Defense Language Institute, West Coast and from Stanford University Law School’s Director College.

Joe is an Amazon #1 Best-Selling Author, with 16 published suspense novels, including six books in the Danforth Saga series, three books in the Curtis Chronicles series, three books in the Lassiter/Martinez Case Files series, and four stand-alones. He has been recognized as "One of The 50 Best Writers You Should Be Reading." His books have received two Tony Hillerman Awards for Best Fiction Book of the Year, been top prize winners on multiple occasions in the Mystery/Thriller category in the New Mexico/Arizona Book Awards competition, received three gold medals from the Military Writers Society of America, received the Eric Hoffer Award, and received Finalist honors in the International Book Awards.

His latest novel, Payback, a stand-alone thriller, will be released by Suspense Publishing on May 12, 2020.

Joe has written short stories which were published in the “Uncommon Assassins,” “Someone Wicked,” and “Insidious Assassins” anthologies. He has also written dozens of articles that have been published in various business and trade journals and is a frequent speaker at business, civic, and writers’ events. To learn more, visit his website at www.JosephBadalBooks.com.

Jimmy
5.0 out of 5 stars Obsessed with Action
Reviewed in the United States 🇺🇸 on May 22, 2020
Verified Purchase
I couldn't put this book down and read it directly after the Motive, the first book in this series. It is best if you read The Motive first, to have the background for Obsessed.
There are so many moving parts and twists in the story. Every time you think something is happening, another curve comes along. It was filled with excitement from beginning to end.

It is another great book from Joe Badal. I have read almost all of his books because he knows how to write an action story.
Read more
2 people found this helpful
Helpful
Report abuse

Writewing
4.0 out of 5 stars Worth reading but has shortcomings
Reviewed in the United States 🇺🇸 on September 25, 2019
Verified Purchase
Good read. Characters are interesting, particularly the Bad Guy (Lonnie). Protaganists are surprisingly, not the main focus. Matt Curtis is not a compelling hero, and almost comes across as a minor player. Ending is inconclusive (must get the next book in the series to find out).
Read more
One person found this helpful
Helpful
Report abuse

Mark Wendel
5.0 out of 5 stars Outstanding Crime Thriller
Reviewed in the United States 🇺🇸 on November 2, 2020
Verified Purchase
Obsessed is the second book in the Curtis Chronicles. Joseph Badal's writing is outstanding with a fast-paced plot and engaging characters. It will keep you on the edge of your seat. I can't wait to read the third book in the series.
Read more
One person found this helpful
Helpful
Report abuse

Lacheln
5.0 out of 5 stars A great series!
Reviewed in the United States 🇺🇸 on June 11, 2020
Verified Purchase
The second of (come to find out) four Curtis Chronicles full of twists and suspense. Too many bad guys to count and you find yourself cheering for half of them! Look forward to books 3 and 4 in the series. Joe is very entertaining.
Read more
2 people found this helpful
Helpful
Report abuse

D. Petty
4.0 out of 5 stars The ending leads to a future Book 3
Reviewed in the United States 🇺🇸 on June 14, 2019
Verified Purchase
Good and exciting - leaves you a bit hungry at the end to know what is going to happen in the future (spoiler ?!?)
Read more
2 people found this helpful
Helpful
Report abuse

LA
5.0 out of 5 stars Another Great Thriller
Reviewed in the United States 🇺🇸 on August 13, 2018
Verified Purchase
This second in a series (The Curtis Chronicles) picks up where The Motive left off. Like The Motive, Obsessed is a lively and fast-paced thriller, with well-developed characters and the type of plot tension and plot surprises that one has come to expect from an accomplished writer like Joseph Badal. This is a must-read addition for anyone who loves well written crime stories.
Read more
One person found this helpful
Helpful
Report abuse

Nancy Sommers
5.0 out of 5 stars EXCELLENT crime thriller!
Reviewed in the United States 🇺🇸 on April 11, 2019
Verified Purchase
Joseph Badal has hit another one out of the park!!! Joe Badal just continues to write one fantastic thriller after another...each one better than the last. Obsessed is as exciting a page turner, nail biter as you will ever read! Chock full of surprises you won't see coming! Can't wait for the next one in the Series!
Read more
2 people found this helpful
Helpful
Report abuse

Mka
5.0 out of 5 stars Best of the bunch
Reviewed in the United States 🇺🇸 on September 10, 2018
Verified Purchase
This is by far the best of Badal's full novels. Realistic situations with fully developed characters and a villain you can love to hate make this a page turner from start to finish. The only bad thing is the next book in the series is not out yet.
Read more
2 people found this helpful
Helpful
Report abuse
See all reviews