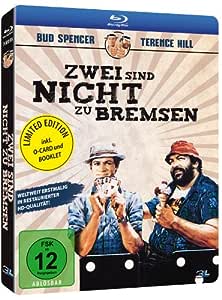 Germany released, Blu-Ray/Region B : it WILL NOT play on regular DVD player, or on standard US Blu-Ray player. You need multi-region Blu-Ray player to view it in USA/Canada: LANGUAGES: English ( Dolby Digital 2.0 ), English ( DTS-HD Master Audio ), German ( Dolby Digital 2.0 ), German ( DTS-HD Master Audio ), German ( Subtitles ), WIDESCREEN (1.78:1), SPECIAL FEATURES: Interactive Menu, Photo Gallery, Remastered, Scene Access, Trailer(s), SYNOPSIS: Johnny Firpo, played as always with supreme agility by Terence Hill, is appointed by the Navy Chief to conduct a crackdown on a gambling mafia, which is threatening the growth of Navy sports. He goes undercover and teams up with Charlie Firpo, played by Bud Spencer, a gambler turned truck driver, since the latter knows the ropes better. What ensues is a rollicking set of sequences, right from the moment a goon interrupts the big Firpo savoring a delicious bowl of beans and onions and gets his skull broken by the same pan. It is a complete package with boisterous fist fights, effortless glances, groovy music, goofy villains, game sequences, and some gorgeous locale in the tropical side. Odds and Evens is full of tiny little surprises like a truck driver who raises a dolphin in the trailer and flirts with a nun, and a man of herculean stature working as a soft ice-cream vendor getting mixed up on the menu, and an innocent cafe owner who saves his orange-squeezer during a brawl, and a poker-faced goon who loses a tooth on every punch on his face. And all such tiny things will blow your worries to smithereens. ...Odds and Evens (1978) ( Pari e dispari ) ( Trinity: Gambling for High Stakes (Odds & Evens) )

4.9 out of 5 stars
4.9 out of 5
96 global ratings
How are ratings calculated?
To calculate the overall star rating and percentage breakdown by star, we don’t use a simple average. Instead, our system considers things like how recent a review is and if the reviewer bought the item on Amazon. It also analyzes reviews to verify trustworthiness.
Top reviews

Vincent Paradiso
4.0 out of 5 stars A little disappointed by picture quality as more could have been done
Reviewed in the United Kingdom on May 19, 2015
Verified Purchase
Having Ordered a few other blu ray's of Bud Spencer and Terence Hill I was expecting a better picture quality and less grain with Odds and Evens but I was disappointed. I own the dvd version as well and that looks nearly as good as this blu ray which is crazy as in 2015 we would expect something more. The German subtitles are burned into the image if you want to see it in English language.you have the option to watch it in German without the subtitles.It has German and English language option. I recommend it for dire fans only as its not a cheap blu ray.These guys movies deserve more than this. Seller will be getting 5 star seller review as did his part. Thank You.
Read more