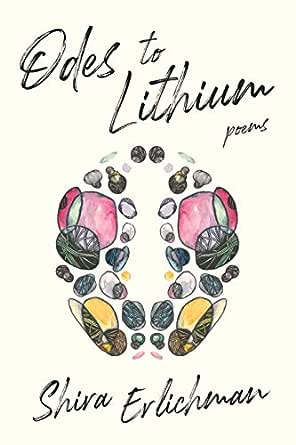 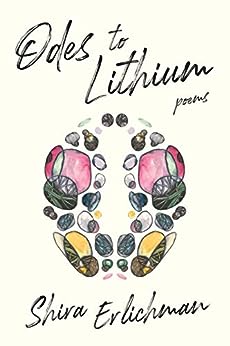 “Shira’s poems transmit experience that nearly defies language, leaving the reader drenched with a new reading of the human: the effects of the mind’s rupture, the enigma of the body’s messages, the terror of one’s own infinitely ingenious yet alien logic. The voice of these pages comments wryly on others’ wary, frightened reactions that increase anguish in the name of helping. The poems trace encounters with mental illness that could not be encompassed by anything but Shira’s honed and startling language and her visual accompaniment of images, each page burnished into a glittering object.” —Annie G. Rogers, Ph.D., Author of A Shining Affliction, The Unsayable, and Incandescent Alphabets

“Odes to Lithium is a remarkable book: it is beautiful, deeply perceptive, haunting, and original. It is wonderful.”—Kay Redfield Jamison, author of An Unquiet Mind and Pulitzer Finalist, Robert Lowell, Setting the River on Fire

“Oh, Radiance. Survival and Surviving Field. How rare, an Eye like this, so able to access its marrow language—original, honest, dear, strange. These poems document and enact processes of finding a language imaginative and struggling enough to carry one’s life. Moving us through imagistic splay and shift, the line is Erlichman’s measure: ‘I know what the sea knows / with the bottom of its mind / unfathomed.’ These poems, I think, are little ‘sight’-engines—miraculous, fevered, whirring things. I’m astonished by breath and lasting at all. I ‘pull a flower / from her skull / & weave it into mine.’ I love her way, her mind.” —Aracelis Girmay

Shira Erlichman is a writer, visual artist, and musician. A three-time Pushcart Prize nominee, her work has been featured in The Huffington Post, BuzzFeed Reader, Nomadic Press, The Rumpus and PBS NewsHour's Poetry Series, among others. She earned her BA at Hampshire College and was awarded a residency by the Millay Colony, the James Merrill Fellowship by the Vermont Studio Center, and the Visions of Wellbeing Focus Fellowship at AIR Serenbe. Her first children's book Be/Hold is forthcoming from Penny Candy Books. She is half of the Odes for You Tour with poet Angel Nafis. As a musician she's performed across the US, sharing stages with TuNe-YaRdS, CocoRosie and Mirah. She's independently released seven albums, including Subtle Creature which premiered in BUST Magazine and was hailed as a "spectacular mystery." Born in Israel, raised in Massachusetts, she now lives in Brooklyn. Learn more at www.officialshira.com. --This text refers to the paperback edition.

4.8 out of 5 stars
4.8 out of 5
52 global ratings
How are ratings calculated?
To calculate the overall star rating and percentage breakdown by star, we don’t use a simple average. Instead, our system considers things like how recent a review is and if the reviewer bought the item on Amazon. It also analyzes reviews to verify trustworthiness.
Top reviews

Chrissy
5.0 out of 5 stars A must read from this year
Reviewed in the United States on November 5, 2019
Verified Purchase
Shira's collection is filled with top-notch poems that grapple with today's most important subjects in insightful and significant ways. The truths and questions feel 'lived in' and explored far beyond the words on the page.
Read more
4 people found this helpful
Helpful
Report abuse

Crystal Stone
5.0 out of 5 stars "Ferment & flower, metallic traveler"
Reviewed in the United States on January 11, 2020
Verified Purchase
So much surprise and beauty in this collection. A on-going love poem to lithium, Erlichman cultivates empathy and compassion. She says, "Every day knifed sharper & doused in electricity" and that's how it feels to be reading, cut open and energized. She writes, "brave: girl in a girl in a girl: nest doll of secret selves" and we see begin to see some of those secret selves. Imaginative and forgiving. A gift.
Read more
Helpful
Report abuse

K.
5.0 out of 5 stars One of the best poetry collections I have ever read
Reviewed in the United States on December 3, 2019
Verified Purchase
Simply beautiful, riveting, visceral at times, emotional, raw, and honest. A must read if you long to read poetry that will truly make you feel and be vulnerable, yet eloquent and make you excited to read again.
Read more
Helpful
Report abuse

Gabby
5.0 out of 5 stars fab
Reviewed in the United States on December 28, 2019
Verified Purchase
i loved it
Read more
Helpful
Report abuse

Tess
5.0 out of 5 stars One of my favorite books of the year (poetry and otherwise)
Reviewed in the United States on December 24, 2019
I had the pleasure of attending the launch party for this at the Ace Hotel, but I'd been hearing about Shira for years, and it was such a pleasure to not only hear her work out loud but also to experience reading it on my own. It's always interesting how writers handle mental illness, and I found it so invigorating/interesting to be enmeshed in Shira's world/brain. As I waited in line for Shira to sign my copy at the Ace, I heard person after person express what her poems meant to them, to have someone voicing their experiences or their loved one's in such an eloquent and ferociously beautiful and truthful manner. One of the fabulous powers of poetry is that sense of microphone, that not everyone finds the way to speak for themselves, but every now and then you find someone who magnifies the voices that are out there and so often (and unfortunately) unheard. A very, very beautiful book, thought-provoking and generous in spirit.
Read more
Helpful
Report abuse

Greg Brisendine
5.0 out of 5 stars An extraordinary collection
Reviewed in the United States on December 15, 2019
I can't recommend this book highly enough. The poems vary in length and visual format in a way that provides an amazing texture to the book and each poem leaves a particular flavor for me. Together though, they stitch together into an amazing story of the poet coming to terms with her illness and learning how to live within it.
Read more
Helpful
Report abuse
See all reviews

Grace Quantock
5.0 out of 5 stars Poems as touchstones
Reviewed in the United Kingdom on February 16, 2020
Verified Purchase
These poems are beautiful, powerful, and mediate truly between the inner and outer worlds and transitions. There are stanzas which became touchstone I carried with me through difficult days. Words that lived alongside me in navigating life. It’s the book that you can’t wait to share, to read aloud, to reflect on. Highly & wholeheartedly recommended if you like poetry library that transforms (itself & you).
Read more
Report abuse

itsme
5.0 out of 5 stars This book is a game changer.
Reviewed in Canada on October 29, 2019
Verified Purchase
Thank you, Shira, for writing this.
Read more
Report abuse
See all reviews