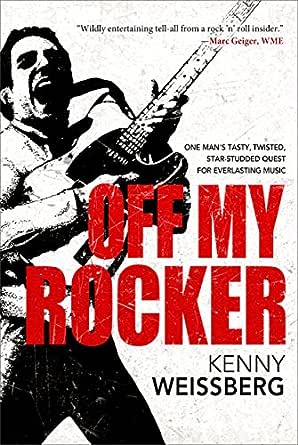 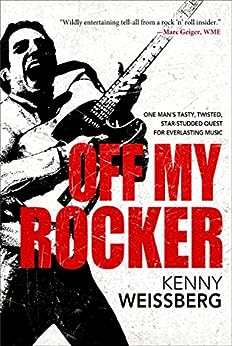 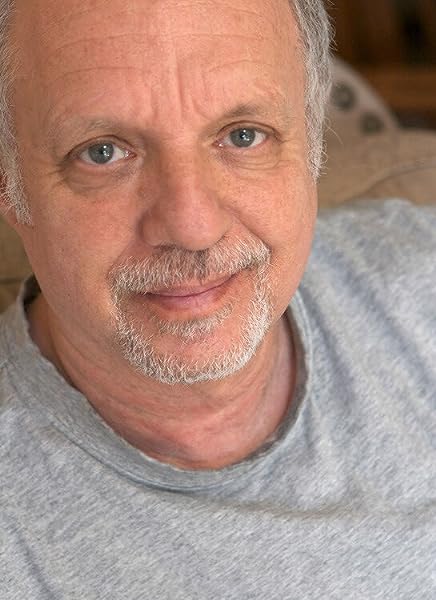 "I've read nearly every music memoir that has been released in the past ten years, and Off My Rocker is in the top five." -- Deborah Speer, Pollstar

"Off My Rocker is a masterpiece of a memoir to be savored by anyone who has ever considered a life in the music business." -- Mark Andes, bassist for Spirit, Jo Jo Gunne, Firefall, and Heart

"I learned everything I know about writing from studying the outgoing messages on Kenny's answering machine. His mastery of language, his knowledge of all things music, his Ernie Kovacs-like wit were things I tried to emulate, then copy, then steal." -- Jon Steele, author of The Angelus Trilogy and War Junkie

"I've known Kenny Weissberg since 1971, when he was a morning disc jockey at KRNW-FM and I was promoting concerts at Tulagi in Boulder. I picked his brain relentlessly for his vast musical knowledge and arranged interviews for him with everyone from Jim Croce and T-Bone Walker to the Eagles and Tom Waits. I hope Off My Rocker is the first of many books by this wacky musical devotee." -- Chuck Morris, President-CEO, AEG Live Rocky Mountains

4.2 out of 5 stars
4.2 out of 5
289 global ratings
How are ratings calculated?
To calculate the overall star rating and percentage breakdown by star, we don’t use a simple average. Instead, our system considers things like how recent a review is and if the reviewer bought the item on Amazon. It also analyzes reviews to verify trustworthiness.
Top reviews

Robert Masin
5.0 out of 5 stars I know absolutely ZERO about the music industry...
Reviewed in the United States on October 7, 2013
Verified Purchase
and not much about the artists themselves. I don't go to concerts. But it did not matter a bit. I LOVED "Off My Rocker."
Full disclosure: Kenny Weissberg and I grew up in the same New Jersey town (South Orange), and as youngsters we had to stick together in our daily arguments with the vile Yankee fans. (We were Giants/Willie Mays guys, natch). Kenny was always funny, incredibly quick-witted, and sharp as a tack. Tons of personality, and it comes across wonderfully in his book.
I was impressed with his candor throughout; he lets it all hang out for the reader.

Bottom line is that Kenny has a wildly interesting story to tell, and that's the way he tells it. You could sense how much fun he had writing "Rocker"...so much energy! Even the parts where he hangs out his dirty laundry, of which there is plenty. (When Kenny tells all, he tells ALL)!

Bottom line is that Kenny, whom I haven't seen in 47 years (!), does not seem to have changed a bit. He could have been a teacher, lawyer, doctor, etc., and his storytelling skills would have been the same. "Off My Rocker", for me (the non concert going, ignorant of the music industry guy), was a real page-turner. The more I read the bigger the smile on my face. And there was never a lull.

I strongly recommend "Off My Rocker." Kenny Weissberg has told a terrific story.

Lianne Downey
5.0 out of 5 stars A Life-Long Entertainer's Entertaining Book
Reviewed in the United States on May 19, 2014
Verified Purchase
Entertainment—that’s what Kenny Weissberg has spent his life providing and his memoir is no exception.

From the emotional first chapter about Otis Redding, through the astonishing years of drug-drenched escapades where he managed to hold down real jobs and marry the love of his life (lifetimes), artist Helen Redman, I found myself putting my own life on hold because Weissberg’s witty writing held me captive at the breakfast table for hours, staring at my Kindle. (Don’t tell my husband.)

I am not a big music fan. In fact, many of the artists Weissberg discusses are either total unknowns to me (he’d hate to hear that), or famous people whose music has saturated my life in the same way I’m appreciative of lovely background vistas. (Again, don’t tell my music-loving husband, who carefully fills my days with eclectic selections from all over the world. I still didn’t recognize some of these names.) But if you know music at all, you will know them, and Weissberg tells tales about the monsters and angels of his working life with amusing honesty.

I live in San Diego and worked as a fine art and theater journalist in the eighties when Weissberg first launched his concert series. When I heard his name announced recently at an author event, I was surprised and curious to read his book.

What I found so intriguing and gratifying was Weissberg’s life story. His personal evolution. His complete frankness about his faults and mistakes. His witty descriptions of the down and dirty sides of musicians, agents, money men, and the concert business as a whole. I enjoyed his observant and thoughtful conclusions about human behavior, good and bad. He took me into back rooms I would never dream of entering. He survived events that would have killed me on the spot! He even managed to ace his way through Woodstock’s muddy miasma, despite his drug-induced haze, and come out shining if not squeaky clean.

A few years older than me, he stayed out of Vietnam, stopped a cocaine habit in mid-spiral, and humbled himself to take back a lucrative job he deservedly lost. He’s faced similar inner battles about compromise in the radio business that I encountered in the publishing business. His honesty, and his ability to change course when in danger of losing himself completely, captured my sympathy and admiration. I could learn a thing or two from him.

Weissberg’s well-honed writing kept me entertained for longer hours than I should have spent. I completely enjoyed his book—ironically, since I probably would not enjoy his musical programming tastes. Go figure. I hope he writes another!
Read more
2 people found this helpful
Helpful
Comment Report abuse

DT
5.0 out of 5 stars Fascinating behind the scenes account
Reviewed in the United States on August 23, 2016
Verified Purchase
This book delivers. Kenny relays his lifelong love of music and his forays into music related careers as a disc jockey, performance artist/musician, and concert promoter. He has the opportunity to meet many legends and up and coming artists. It’s always interesting to hear how celebrities really are as people. He also tells the story of how he met his wife and shares a bit more personal information. I would’ve liked a little more of this. He mentions that his wife is an artist but gives no details. He also admits partying heavily, and I can’t imagine how this affected his marriage. I found Kenny’s story highly entertaining. He’s a baby boomer and was in the thick of some interesting times. I attended a concert at Humphrey’s years ago, and it was fascinating to read what went on behind the scenes. It was a great venue. I highly recommend this book. Rock on, Kenny!
Read more
One person found this helpful
Helpful
Comment Report abuse

Diversity
5.0 out of 5 stars An Enjoyable Read, Daring and Fun
Reviewed in the United States on April 15, 2014
Verified Purchase
An honest Tell-All that covered over 40 years in the career life of Kenny Weissberg, an average American Jewish kid who loved music and followed his dreams wherever music would take him. As a radio DJ, music journalist/critic, leader of a rock band and concert producer, Kenny (Weissberg is too formal.) rubbed shoulders and wined and dined with some of the top performers and movers in the music world.
Kenny called the music business “soulless, brutal ” as he witnessed the greed of the performers and the agents who represented them. As I read the hilarious and sometimes shameful stories about his business associates and the divas (male and female) from the 50s to present day, I was appalled at some of my favorite artists’ outrageous behavior and demands. I wondered if the artists and associates gave their permission for Kenny to expose the ugly sides of their personalities that their fans and the public never see. (If they didn’t, I know they are ticked off!) Kenny was equally honest about his own life as a young man with a happy-go-lucky, “Woodstock,” free to be and try everything attitude and how he succumbed to the same cut-throat games to make a profit or survive in the music world that he loved. It’s also a book about lasting friendships and growing up and realizing what is important in life. His style is conversational, as if he’s telling the stories to an old friend. The references to songs and the artists who brought them to life was a bumpy, but fun walk down memory lane. Any music lover will love this book.
Read more
One person found this helpful
Helpful
Comment Report abuse
See all reviews

E Griffith
2.0 out of 5 stars One for U.S. Readers only I think......
Reviewed in the United Kingdom on April 19, 2015
Verified Purchase
It was ok in places.....especially some of the anecdotes about some of the better known act, Berry, Baez, Domino etc....and also the antics of some Divas. But, in the UK, not many of the acts mentioned ever made it across The Pond so we're lost on me. As for the DJ years I suppose we had our own John Peel who championed up and coming music acts in the same way so there was nothing new here.
Read more
Report abuse

Jim B
5.0 out of 5 stars Rollercoaster ride through the music business
Reviewed in the United Kingdom on November 7, 2014
Verified Purchase
I really liked this - from small town dj to big time concert booker with great pen portraits of demanding divas, music business hustlers, coke heads and other colourful characters. There's even a love story thrown in (the good woman who rescues the hero from himself). Fascinating stuff - I read it in a couple of sittings.
Read more
Report abuse

Mikey
5.0 out of 5 stars What a colourful life!
Reviewed in the United Kingdom on October 14, 2014
Verified Purchase
Thank you Kenny for producing this book that told your careers stories. You gave insights to the life of being a radio presenter to a concert producer in believable descriptions. Thank you for sharing your life stories with us in Amazon Kindle Books.
Read more
Report abuse

L6krb
3.0 out of 5 stars OK, worth a punt into rock music nostalgia
Reviewed in the United Kingdom on December 15, 2014
Verified Purchase
Quite good at portraying the acts and their antics of the era when he was organising them for the clubs, but his DJaying period could get a bit boring at times
Read more
Report abuse

bristol bookworm
2.0 out of 5 stars Ok but didn't keep me.
Reviewed in the United Kingdom on March 23, 2015
Verified Purchase
Somehow I just wasn't gripped, and moved on to read something else.
Read more
Report abuse
See all reviews