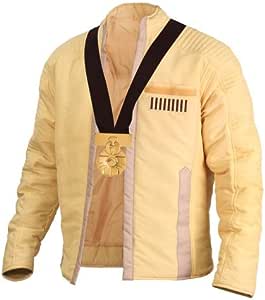 by Museum Replicas
3.7 out of 5 stars 13 ratings
| 3 answered questions
Currently unavailable.
We don't know when or if this item will be back in stock.

The well reknown ceremonial jacket that Luke Skywalker wears in episode IV after destroying the Death Star and saving the rebel base from a horrific fate. Constructed of nylon with a polyester lining, this coat is an athletic cut, and features no zipper. The ceremonial medal that Luke was rewarded is included with this jacket. All detail to this jacket and medal is true to Episode IV and is an identical replica of that found in Lucasfilm Archives. This fully licensed jacket comes with a nice clothing bag for protection, and a full color certificate of authenticity.

3.7 out of 5 stars
3.7 out of 5
13 customer ratings
How does Amazon calculate star ratings?
Amazon calculates a product’s star ratings based on a machine learned model instead of a raw data average. The model takes into account factors including the age of a rating, whether the ratings are from verified purchasers, and factors that establish reviewer trustworthiness.
Top Reviews

Tray Nichols
5.0 out of 5 stars Use the Force Luke
Reviewed in the United States on April 25, 2012
Verified Purchase
What a great jacket. I have always wanted one of these and this makes it that much easier to get. Quality is excellent and the feel when wearing is outstanding. I feel like I am ready to take on the Empire.

This is a great product and would recommend it to everyone who fights for the Rebellion.

Armando Gonzalez
4.0 out of 5 stars ...and it's not just a costume.
Reviewed in the United States on December 30, 2013
Verified Purchase
If you love Star Wars as much as I do, buying this jacket was a no brainer for the price. Not only do you get the jacket but you get a prop medal as well. Now you have something to put in your collection AND something to wear on the weekends.
Let me start by saying that if you go out in public wearing the jacket AND the medal, a hoard of stormtroopers would not be able to protect you from the ribbing you will get from friends, family and strangers at the mall. Resist the urge, man! That isn't the point of buying this set. Just because Luke did it it doesn't mean YOU can!
Let's look at the medal. First off, it's heavy. Maybe not 14k heavy but it certainly feels substantial. It looks exactly like what you see at the end of the film and would look equally as well on display at the office or study. I used a small shadowbox with a black frame and it makes for a great conversation piece.
The jacket for what is basically a "costume" doesn't look bad when worn out. Now hang on, there is a caveat to this. I wouldn't recommend you wearing this to work or to a fancy dinner party. If you have to dress up, don't kid yourself. Instead, wear it with a t-shirt and jeans, any place that fun. To the movies, out to a ball game, going out to the club. It looks casual enough that most people have no idea what it's supposed to be, it just looks stylish and unique. So long as you keep it casual, you're good.
There are a couple of things you may want to know before you pick one up. First, they run big...an entire size too big. I wear a 40 regular in mens sportcoats and the medium is almost too big.
It's warm. You wouldn't think it would be but I almost too warm wearing it in the movie theater.
Looks are deceiving. Though it LOOKS as if the is a breast pocket and two side pockets, there aren't. It's just part of the design. Also, and this part is important, there is no way to close the jacket, No buttons, zippers, velcro, nothing. It's intended to strictly be worn open. However there is a checkbook pocket on the inside but I wouldn't put MY checkbook in there as it's pretty flimsy.
All in all, it's fun to wear and though most people won't know what it's supposed to be, the reaction I get from those who do was worth every penny.
Read more
10 people found this helpful
Helpful
Comment Report abuse

Haggis
4.0 out of 5 stars Like my father before me....
Reviewed in the United States on June 7, 2011
Verified Purchase
The absolute best thing about this jacket apart from its ability to empart extra midichlorians to its owner, is the amazing response that you get from wearing it. If you don't announce that youre wearing a prop, people will just look at the jacket and know somewhere they've seen it before and that somehow they like it. They are transported back to the first time they saw Star Wars when it was socially OK for them to live in their parents house and play D&D until the sun came up. No one had a girlfriend and they werent fat (they were just big boned.) You might even see a small tear well up in someones eye as you glide right past them to talk to all those sexy ladies who will be unable to resist touching your zipperless jacket of Jedi force.
Read more
6 people found this helpful
Helpful
Comment Report abuse

Very excited. Up to this point I've specialized in photographing tractors and other farm equipment. My wife has been very understanding about my frequent trips to Fargo, Des Moines and Boise. She says she can live with those weekends away while I hang out with middle-aged white guys and take pictures of farm equipment.

To celebrate my promotion, my wife got me this jacket from my favorite movie so I'll have something cool and awesome to wear to work. I've always wanted it! She made me promise to wear it on every job for Sports Illustrated, especially my first trip to Tahiti. she wants lots of pictures of me wearing the jacket while I'm on the shoot to show her that I really do love it.

I said, "Hey! No problem! I love this jacket. I just hope those super-models don't think I look too awesome in it as I snap their pictures!I don't want to have to tell the girls 'Hey beautiful super-models! I know I look cool, but I'm a married guy so don't you try to tempt this 52-year-old stud-muffin.' Hah-Hah!"

I'm such a lucky guy! Now I have something to alternate with my complete and screen-accurate, Indiana Jones outfit.
Read more
6 people found this helpful
Helpful
Comment Report abuse

I. Kahn Teeter-Totter
5.0 out of 5 stars Lifegiving!!
Reviewed in the United States on November 22, 2013
People often said to me "Get a life!" Or "you have no life!" Or, simply, directly, and cuttingly, "Loser!" Then I purchased this jacket. Now, I can honestly say, "I DO have a life!" And that life is all about having this jacket.
Read more
3 people found this helpful
Helpful
Comment Report abuse

biglu
5.0 out of 5 stars Very Very Very Happy
Reviewed in the United States on September 17, 2013
I am very happy to see that the price on this product has gone down. I will now check to see if they have the size 4x. It is hard to find elegant outfits for my frame since I am only five foot six inches. I am not sure I will wear the medal. I usually wear my first place medal from the convention. I won that for my original TonTon outfit.
Read more
3 people found this helpful
Helpful
Comment Report abuse

Some Guy
5.0 out of 5 stars Too far, Han.
Reviewed in the United States on July 10, 2012
When I woke up that morning, I'd merely thought that I'd misplaced it in one of the other rooms. Last night had certainly fueled enough hijinks for it to be considered. But, unfortunately, I was mistaken. It turns out my drinking buddy had sold my favorite jacket for the money he'd used for my 21st birthday! Now, I'll admit, that got to me a little, but I wasn't furious or anything...until, of course, I scrutinized the image to discover that he'd sold my medal as well! And I doubt I have to go into any detail about how much hell I went through for that!

To keep this from turning into a rambling, if you happen to be the lucky winner of my jacket, please find your nearest source of intergalactic travel and return it. A reward is being offered. One free shot at an anonymous bounty hunter.
Read more
Helpful
Comment Report abuse

Logan "Chappy" Alamos
5.0 out of 5 stars Great for wasting time with your friends when your chores are done
Reviewed in the United States on December 30, 2013
Epic coat. I wear mine every time I find myself going into Toshi Station to pick up some power converters.
Read more
5 people found this helpful
Helpful
Comment Report abuse
See all reviews from the United States