You've subscribed to Miami Jones Florida Mystery! We will preorder your items within 24 hours of when they become available. When new books are released, we'll charge your default payment method for the lowest price available during the pre-order period.
Update your device or payment method, cancel individual pre-orders or your subscription at
Your Memberships & Subscriptions
There was an error. We were unable to process your subscription due to an error. Please refresh and try again. 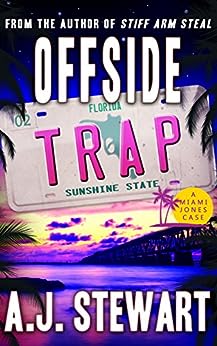 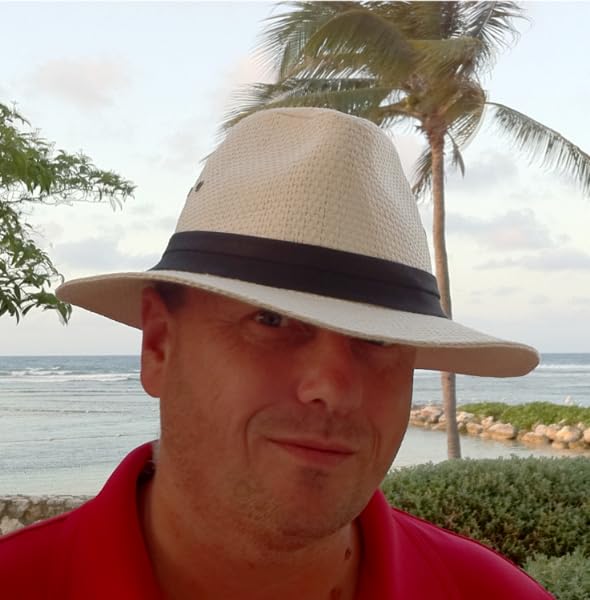 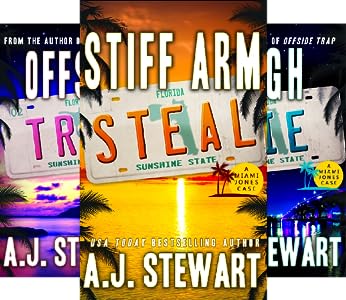 A.J. Stewart wrote marketing copy for Fortune 500 companies and tech start-ups for 20 years, until his head nearly exploded from all the stories bursting to get out. Stiff Arm Steal was his fifth novel, but the first to make it into print.

He has lived and worked in Australia, Japan, UK, Norway, and South Africa, as well as San Francisco, Connecticut and of course Florida. He currently resides in Los Angeles with his two favorite people, his wife and son.

AJ is working on a screenplay that he never plans to produce, but it gives him something to talk about at parties in LA. --This text refers to an out of print or unavailable edition of this title.

4.5 out of 5 stars
4.5 out of 5
215 global ratings
How are ratings calculated?
To calculate the overall star rating and percentage breakdown by star, we don’t use a simple average. Instead, our system considers things like how recent a review is and if the reviewer bought the item on Amazon. It also analyzes reviews to verify trustworthiness.
Top reviews

Kindle Customer
5.0 out of 5 stars Better than the cartoonish cover!
Reviewed in the United States on December 6, 2020
Verified Purchase
I almost didn't start this series because I found the names of the main character and series (as well as the cartoonist covers) somewhat silly and offputing. But BOY am I glad I gave these books a chance! I started them based on the reviews...clever, well plotted, well-developed characters whom I've come to care about. This is the second book in the Miami Jones series and I plan on starting the third right away! Stewart has created books I look forward to reading and I want to see what happens next. These traits are the true tests of a good book for me. Give Miami Jones a try- you won't be disappointed!
Read more
Helpful
Report abuse

Miss Parker
5.0 out of 5 stars If you love Florida-based adventure, give A.J. Stewart's series a try
Reviewed in the United States on February 7, 2016
Verified Purchase
I accidentally stumbled across A.J. Stewart's novels as a "featured recommendation" suggestion from Amazon based on my historical reading preferences and searches. All I can say is, "that is one smart algorithm!"

Author A.J. Stewart and his protagonist, Miami Jones, are rapidly rising in the ranks of my preferred Florida-based author/leading character combinations, which includes the likes of Tim Dorsey/Serge Storms, Randy Wayne White/Doc Ford, and Carl Hiaasen/Skink (Governor Tyree). MJ has his own unique personality and quirks, and brings a different perspective/way of thinking to the crime mystery dynamic table. I haven't really read the books in any order that makes sense, and I'm sorry that I have been skipping around, because I think the character development is interesting enough that it should be followed chronologically. Somehow I am going to find a way to correct that, but my best advice to new readers is that when giving Stewart's Miami Jones series a chance, do yourself a favor and start at the beginning.

Looking forward to more Miami Jones adventures, as I remain grateful for the suggestion to give this series a try.

NJT
5.0 out of 5 stars Hit it out of the park!
Reviewed in the United States on June 1, 2020
Verified Purchase
Absolutely the best Miami Jones yet. Next closest thing to watching MLB, which COVID has prevent so far this year. I appreciate you filling in the gap with this awesome book, AJ! I enjoyed the change of scenery to a spring baseball location that I am more familiar with. Great story line, a mystery with a bit of sentimentality mixed in. Thoroughly enjoyed it.
Read more
Helpful
Report abuse

Windu
5.0 out of 5 stars Love Miami Jones
Reviewed in the United States on November 7, 2015
Verified Purchase
Love the character Miami Jones. He is not your normal PI. He is smart ,resourceful, and take nothing from anyone. He is quick to size people and situations.
He does have a love interest Danielle who looks after him. She is a police officer which comes in handy when he needs help.
Miami lives in South Florida which is where I reside so the stories are even better for me for I know all the places he goes
I highly recommend A.J.Stewart's books. They are interesting and his characters are entertaining. You will find yourself laughing at some of Miami Jones thoughts to himself.
I am going to download his next bok.

mark earls
5.0 out of 5 stars Darn good read
Reviewed in the United States on February 25, 2015
Verified Purchase
Typically I prefer sci-first, fantasy or horror, however I also grew up on Agatha Christie, Marlow, and assorted other mystery, crime and detective stories. A.J. Stewart's Miami Jones stories remind me of lazy Saturday afternoons spent reading or watching Charlie Chan, Sherlock Holmes, The Thin Man and other detectives. A cross between Magnum PI, the Equalizer and just a touch of The Rockford Files. Try him out the first story sets you up, this second one improved on both the background and A.J.'s storytelling ability. You won't be disappointed, as for me I am on to the 3rd mystery.
Read more
One person found this helpful
Helpful
Report abuse

Sam B. Wagner
5.0 out of 5 stars A top athlete found dead, an unscrupulous college president lead an attempt to eliminate all school sports.
Reviewed in the United States on April 21, 2015
Verified Purchase
Is it murder or an overdose suicide,p that leads to corrupt politicians, vicious drug dealers and mob ties to the construction industry, each throwing baffling spreads of hidden and dangerous clues. This page-turner is an outstanding addition to the Miami Jones saga as he forces reality out of smoking mirrors and idle thoughts while facing evil with a quip, insight, and panache. Sheer tenacity begins to unravel a tightly woven coverup which also reaches deep into the Miami Police Department. Follow the money. An excellent read and well worth the time..
Read more
One person found this helpful
Helpful
Report abuse

Charles Marlatt
4.0 out of 5 stars good read
Reviewed in the United States on November 16, 2020
Verified Purchase
outstanding character development as well as vivid details of South Florida.Book was 359 pages,perhaps 300 pages would suffice.Easy to have empahty for the protaganostist.Buy the book.
Read more
Helpful
Report abuse

JW
5.0 out of 5 stars Development
Reviewed in the United States on October 1, 2016
Verified Purchase
In Florida, intrigue swirls around treasure hunting and land hunting, finding land available for development. Fascinating dialogue between characters, not a lot of action, but enough to keep the story moving. Some sports philosophy, and further development of the Miami Jones character and his several regular associates. Includes instructions on playing a saxophone. Interesting.
Read more
Helpful
Report abuse
See all reviews

CarrieMarrie
5.0 out of 5 stars So glad I discovered this author. Can't wait to read the next one!
Reviewed in the United Kingdom on June 16, 2015
Verified Purchase
Excellent follow up
Read more
Report abuse

This time around, we learn more about Ron and Danielle and more about sports, education, politics and the underworld. There's a fine line between pride and intelligence and Offside Trap deftly shows how pride can obliterate that line. Without being judgmental, Stewart tells a story the reader can relate to ... when does pride overtake smart? what is really important to you? when do you cross your own lines?

Stewart is a talented writer; he moves this story along and leaves the reader teetoring on the edge ... do I put the book down and get some sleep or do I keep going on to find out what happens next? It takes a deft hand and a good dialogue to keep a reader so in tune with a fictional character who has suddenly morphed into one of your newest friends. Stewart better not put down his pen ... I want more of Miami Jones!
Read more
One person found this helpful
Report abuse

Ronald N D
4.0 out of 5 stars Pretty well done detective/PI type yarn.
Reviewed in Canada on August 30, 2016
Verified Purchase
Miami Jones is virtually a formula type PI. Gruff, smart, knows all the right people, and gets things done. What helps to set this book apart from the usual ho hum genre story is the writing style of the author that keeps your interest sky high and not wanting to put the book down. I certainly highly recommend this read. Enjoy.
Read more
Report abuse