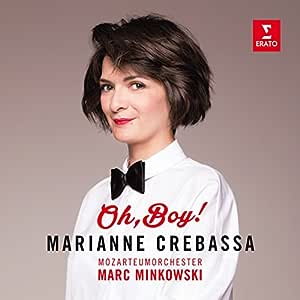 Marianne Crebassa (Artist) Format: Audio CD
4.2 out of 5 stars 13 ratings
See all 3 formats and editions Hide other formats and editions
Includes FREE MP3 version of this album.&nbspProvided by Amazon Digital Services LLC. Terms and Conditions. Does not apply to gift orders.&nbspComplete your purchase to save the MP3 version to your music library.

“One of the most important voices of our time,” is how the young French mezzo-soprano Marianne Crebassa is described by Marc Minkowski, the distinguished conductor for her debut album, Oh, Boy! Comprising arias for young male characters who are sung by a woman – the so-called ‘trouser roles’ – it offers an alluring programme of Mozart, Chabrier, Gluck, Gounod, Hahn, Massenet, Meyerbeer, Offenbach and Thomas. Crebassa – praised by Le Monde for her “incredibly beautiful timbre and transcendent presence” – shows why she has already made an impact at the Paris Opéra, La Scala, Milan, the Berlin Staatsoper and the Salzburg Festival. When she sang at the Salzburg Festival in 2014, the Financial Times described Crebassa as “dazzling … with doe-eyed looks, the seductive innocence of Debussy’s Mélisande and a luscious voice that seems destined for Massenet’s Charlotte.” The New York Times has hailed her as “splendidly charismatic” and Die Welt has praised her “evenly produced, shimmering timbre”. Shortly after she graduated from the Conservatory of Montpellier, not far from her hometown of Béziers in southern France, Forum Opéra described her voice as “opulent and perfectly projected,” singling her out as “an artist we are sure to hear more about