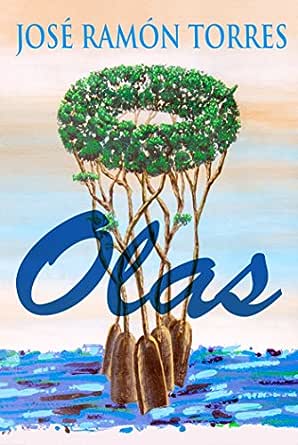 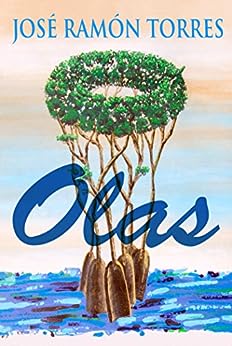 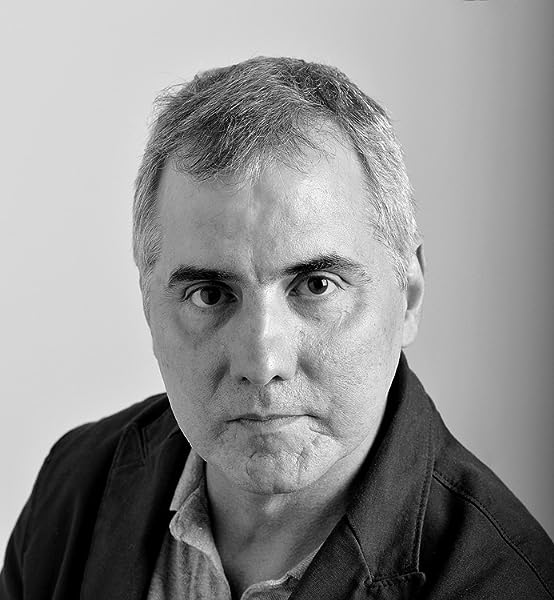 ***** "Waves by José Ramón Torres is a powerful historical fiction that can be read as a piece of political protest, a succinct and compelling social commentary on Cuba. In this thrilling and engaging work, the author unveils a Cuba that is so often masked from the eyes of tourists and readers while exposing the disenchanted world inhabited by the poor, the have-nots, and marginalized.
"Angel is the protagonist, a symbolic character whose hopes and dreams, despair and fears represent those of the millions of Cubans who are tired of living in their country. Angel sees no hope in his country. He is tired of everything - famished and uncertain - but he has a family to provide for and he's ready to do anything to create a future for them. The only problem is that he can't provide for his family while in Cuba. There is only one path to take, a treacherous path, filled with danger and uncertainty, but it's the only path: migration.
"José Ramón Torres immediately plunges readers into the heart of intense action with powerful descriptions of people flooding the embassy seeking protection. From the very first page, he chronicles the predicaments of "pilgrims of the earth," people who are ready to do just about anything to leave a country which is theirs. The writing is beautiful, at times evocative and highly descriptive, capturing the different emotions of the compelling characters and describing the intense conflict lived at different levels and stages by the characters. The story is laced with historical undertones and facts that will awaken readers to the immense suffering of many silent people. José Ramón Torres is a skilled writer, one who will be remembered as the "voice of the voiceless" in the tradition of Jorge Luis Borges, the Argentinian writer.
"Waves could have been just a book like many others, but it stands apart because it talks about crucial issues affecting the world's political landscape and it talks about them in a very compelling way." - Romuald Dzemo for SAN FRANCISCO BOOK REVIEW.

"'As the door clangs shut behind him with a rusty screech, Ángel remains motionless, sinking into darkness and a humid stench.'
"The history of Communist Cuba will always be compared to that of Capitalist America's, because of their conflicting ideologies and geographical proximity to one another. Set during the first months of 1980, this book follows the hopes, dreams, and fears of a family torn by the harsh conditions in their native Cuba and their yearning for a new life in America. Ángel, the father, is one of the thousands of people who crams into the Peruvian embassy looking for asylum in another land to get out, but he has his misgivings about what actually awaits him abroad and returns home. His children, on the other hand, are more optimistic about leaving. Emilia, his daughter, pays for passage on a yacht to Miami with her husband, while his son Eduardo, currently serving in the military, desires leaving but is duty-bound and compelled by a beautiful student to linger.
"The sharp contrast between not only the United States and Cuba is a prevailing theme of this story, but it also goes another layer deeper. The expectations of what America can offer Cuban refugees versus what conditions in the crowded cities will actually provide them are a serious concern for Ángel. Even as he is put in prison for involvement in illegal gambling and turns increasingly to drugs and alcohol, he has his misgivings about being separated from what family remains in Cuba, while others are desperate to leave by any means. Packed with drama, paranoia, and suspense, the author strongly develops compelling characters who just as easily serve as allegories for the hundreds of thousands of refugees who have lived the reality of this tale. A blend of well-crafted fiction and social history, this book thrives on the strength of its characters and the reality of its setting." - Michael Radon for THE US REVIEW OF BOOKS.

**** "José Ramón Torres's fictional work, Waves, captures a historical period when life in Cuba was extremely difficult, resulting in mass migration from the country. The novel begins in Havana in the early 1980s. Angel Ribot is the main protagonist, as he, family members and close friends struggle with daily life while under Fidel Castro's controlling regime. The most important decisions for all were whether or not to seek asylum at an embassy, try to leave the country by other means, or choose to stay in familiar surroundings. Different choices were made by Angel and the people he loved - some went to Peru; some made the treacherous crossing to Miami immediately, while others followed many years later; some stayed and endured harsh conditions. The day-to-day living conditions in Cuba, as well as the emotional toll felt by separated family members, are poignantly portrayed over fourteen years.
"In his historical novel, Waves, author José Ramón Torres uses wonderfully descriptive language to paint realistic scenarios. The reader will not forget the crowds at the Peruvian embassy, the smells of a crowded jail cell, nor the horrible sea crossings. The reader will feel the fright of being labeled a dissident, the elation of seeing the American coastline, and the love between father and children after many years of separation. Although the book is a novel, the author has expertly woven interesting, factual information throughout the story, teaching and engaging the reader simultaneously. This is a compelling and intriguing read; everyone who reads this book will gain a better understanding of the struggles in Cuba during recent decades." - Deborah Lloyd for READERS' FAVORITE.

4.7 out of 5 stars
4.7 out of 5
10 global ratings
How are ratings calculated?
To calculate the overall star rating and percentage breakdown by star, we don’t use a simple average. Instead, our system considers things like how recent a review is and if the reviewer bought the item on Amazon. It also analyzes reviews to verify trustworthiness.

Angela Santana Ministries
5.0 out of 5 stars This Book Changed My View on Immigration.
Reviewed in the United States on February 6, 2015
Verified Purchase
I am an American, so I have never had a view of what people who emigrate to the United States have to experience that causes them to leave their own countries. However, I did live in an area that was similar to what some of these people were going through. Except, I did not want to leave my country, I just wanted to leave my neighborhood for a much better neighborhood. This book offers me an inside, personal look at what people are having to endure and risks they are willing to take to get to a better life.

What Olas taught me was what people are willing to sacrifice so they can get out of their corrupt countries. Corrupt leadership is only interested in pay-off's and the bigger, better deal for themselves while all the time they are passing laws that restrict and hold citizen's hostage. This leaves them at the mercy of politicans who care nothing for them.

This family was willing to sacrifice their own lives fighting against sharks just to get out of Cuba; even if they lost their own lives in the jaws of said shark. Their situation must have been really dire to have to risk life and limb for a better life in a strange place that they have never seen. I have gotten pretty emotional while reading this book.

As an American, I would make two suggestions:

2) To know just how blessed we are to live where we do because there is always someone out there who is struggling so much more than we are.

I do highly recommend this book because I want people to know that there are thousands and thousands of whole families looking to make a better life for themselves in a place where they are treated as valued citizens. My heart goes out to the people who have to suffer through the events laid out in this book.
Read more

Ricardo Bardo
5.0 out of 5 stars Excellent narrative and portray of a recurrent period in the history of contemporary Cuba
Reviewed in the United States on July 10, 2015
Verified Purchase
Mr. Torres has been able to depict with his novel what has become part of the lives of many Cubans, immigration. Through his excellent mastery of the Spanish language, he has portrayed the life and aspirations of many Cuban families. I can't wait for his second novel.
Read more
One person found this helpful
Helpful
Comment Report abuse

anna elisa orofino
4.0 out of 5 stars no man is an island
Reviewed in the United States on September 22, 2015
I have read Olas in its Spanish version this summer. The author gave me a copy and told me about the novel. It was a great opportunity to talk directly with the author because he explained me his feelings about Cuba, his native country, and all the difficulties for Cuban people to have a "normal" life. His thoughts and opinions about the past and present life in Cuba were very interesting and engaging. So, it was a sort of a preface for my reading. A real preface. made by the same author! When I started to read the novel it was as I already knew the characters and their efforts to have a better life far from Cuba, their beatiful island. One of the aspects that struck my attention was this mix of different feelings: hope, fear, pain, disappointment. And it was inevitable thinking about all the migrants that come every day to the coasts of my island (Sicily). Their crossing the Mediterranean sea reminded me the same journey made by Cuban people to reach the USA. The same dangerous journey, the same hopes.
Read more
Helpful
Comment Report abuse

Mag Cam
4.0 out of 5 stars Absorbing, entertaining and insightful
Reviewed in the United Kingdom on December 14, 2015
Verified Purchase
Once I’d started, I found it hard to put down. The heart-stopping, high-drama and tragic episodes are well balanced by lower-key accounts of everyday Havana life, some very entertaining, and there are some beautifully painted descriptions and also a few steamy-but-tasteful sex scenes. The characters and the relationships between them are skillfully and empathetically developed, and the dialogues are well scripted and involving. Waves deepened my understanding of Cuba and its political/historical background in a very accessible way. Particularly relevant to the current situation in Europe is the insight the author gives into the angst, hopes, fears and frustrations of ordinary people considering taking the huge step to migrate, the risks in doing so, and the stresses and strains of establishing a new life in a country with a very different culture.

Overall, this is a thoroughly enjoyable read and highly recommended – something in it for everyone, I think.
Read more
Report abuse