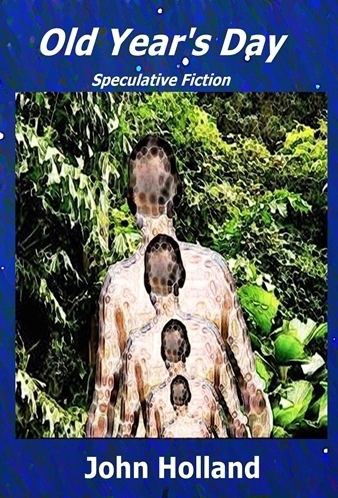 Start reading Old Year's Day on your Kindle in under a minute.

Uvi Poznansky
5.0 out of 5 stars Will the quest succeed?
Reviewed in the United States on September 2, 2017
Verified Purchase
Old Year’s Day is so named after the status quo, established by the Corporation. It decides to freeze further expansion beyond the ‘Settled Universe’ and to stop time, so that clocks and calendars would be reset to start the new year, 2199, all over again. Written in first-person narrative, this is an imaginative account of Dowling, a man struggling to understand this relationship to another presence—Jones, the voice that “wants to be heard” playing in his head. And in Jones’ story, there are stories within the story, as he remembers his love, Caroline. “I no longer have the blood and flesh to warn me, but the memories of Caroline are no less vivid for that.” Jones also wonders about his presence living into the future. “Why do I think that of all the great people who have ever lived, it would be just an unremarkable individual such as me who would get to experience the miracle of an afterlife?”

Listening to his memories “hangs heavily” on Dowling. He is constantly reminded the duality between what he looks on the outside and what he is. “I look tall and strong… but I’m as tough as tissue paper.” What makes life even more difficult for him is Wilson gradually reducing his drugs, in preparation of an escape. “She has to do it slowly or I’ll go right over the edge of insanity.” Weaning him off drugs induces dreams, new realities that test his perception of time. Finally she tells him that “We are going to break out of here on the morning of Old Year’s Day.”

I love the realization that “We may never succeed in our quest… but we can hope and we can try.”

just mercedes
5.0 out of 5 stars Speculative fiction - or Creative Non Fiction? You decide.
Reviewed in the United States on August 7, 2017
Verified Purchase
I've been a fan of John Holland's writing since he released his first book of poetry, Under the Dog Star. With Old Year's Day he takes a slightly different direction, but the writing is as full of imagery as his poetry. He explores the function of memory, and consciousness, in a very original way.

I found myself wondering if memory is actually a product of time, or whether in some way, time is a function of memory. Is this bleak, dystopian world pictured in the book what we are headed towards, or what we have come from?

Or is this buried 'memory' actually what we call 'instinct', or 'racial memory', and is it a function of genetics? Fascinating book.
Read more
One person found this helpful
Helpful
Comment Report abuse

Gigi Sedlmayer, Book Excellence Award Finalist winning author of the Talon series
5.0 out of 5 stars A fascinating read
Reviewed in the United States on July 27, 2017
Verified Purchase
The Quest for existence.

It is the year 2199 and it stays for the rest of time.
Dowling, a prisoner on planet Renod tries to suppress his inner voice, but realizes, that another person, Jones, lives in his consciousness.
I won't say more, so not to spoil your read. You have to get it and read it, but be aware, that you can't put it down.
Read more
Helpful
Comment Report abuse

Charles Freedom Long
5.0 out of 5 stars A philosophical, highly imaginative, speculative book that will make readers question their fixed beliefs
Reviewed in the United States on August 31, 2017
Old Year’s Day takes the reader to a speculative and visionary place, where two beings share one body. One of them, Dowling, a flesh-and-blood “maladjust” human, is a prisoner in a penal institution of “The Corporation,” on the jungle planet, Renod. The other, Jones, is a deceased human who has a history of resisting The Corporation. As the story progresses, Dowling/Jones truly become –if you can imagine it—one being, albeit two persons in one body.

The Corporation is the sole ruler of a strictly regimented, dystopic, consumer society “where it is forever 1984, or actually forever 2199.” Consumerism is the end-all and be-all. And to that end, The Corporation has decreed it is wasteful to have new years. They have days, weeks, and months, but the society repeats 2199 over and over again, each year celebrating “old year’s day.” Dowling, like the other prisoners, is treated to a steady diet of mind-altering drugs, until he would be rehabilitated and permitted to rejoin the society, where he can begin to pay back the bill for his rehabilitation services. He would then live the rest of his life in debt to The Corporation.

But, the Mind Nurse, Wilson, has other plans for Dowling. She is a member of the resistance, who believe that Dowling/Jones will lead them to salvation. So she secretly weans him off his mind altering drug, and effects an escape into the jungle with him and other prisoners.

What happens there, you will have to read on your own.

The question of what is the true reality and what is the reality we create for ourselves is the recurrent and powerful theme of this speculative novel. The author points out through Jones to his host body holder, Dowling “the mind is a good liar.” In a rambling, convoluted, wordy, and often preachy way, but with logic in it, Jones brings Dowling along from mindless sheep to free-thinking human. “You will find your own method of coping with this new kind of abnormality that has been forced on us by The Corporation.”

The book also seeks to ask what the proper role of religion and social structure might be in a just society. In the dystopic society pictured, democracy has not been able to survive the onslaught of religion and The Corporation. But in the new society the escaped prisoners must form in the real jungle—as opposed to the constructed jungle of the Corporate society—they must decide for themselves what parts of religion, democracy, and socialism they want. A final inquiry in the novel deals with the question of sentience, and the existence of sentient beings outside the human race.

All in all, a philosophical, highly imaginative, speculative book that will make readers question their fixed ideas.
Read more
One person found this helpful
Helpful
Comment Report abuse
See all reviews