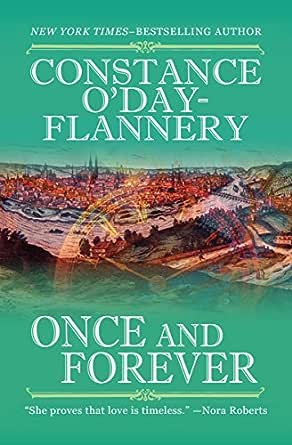 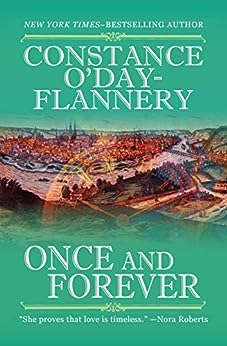 Once and Forever Kindle Edition

Constance O’Day-Flannery, the mother of two children, took up writing when her children started school and she had spare time to do what she had wanted to do for a long time. She has never taken a writing course and her inspiration came from reading romance novels during a period of recovery from surgery. She let her imagination take over and wrote her first novel in about a year and a half. In the process, she created an entirely new genre of romance novel, the time travel romance, one of the early variations of paranormal romance, and she quickly became a huge success. She has published more than twenty novels, and each and every one has appeared on national bestseller lists. She received the Romantic Times Book Club Award for Best Time Travel for Timeswept Lovers and the Romantic Times Book Club Award for Best Contemporary Fantasy Romance for Second Chances. In 2001, she moved to Ireland and spent several years living there. Eventually, she moved back to the United States and lived in Pennsylvania for several years before moving to the Atlantic coast region of southern New Jersey.
--This text refers to an alternate kindle_edition edition.

O'Day-Flannery's (Anywhere You Are) newest time-travel romance places Maggie Whitaker, a 40-year-old unemployed divorc?e, in Stonehenge, England, with an unorthodox fairy-godmotherish aunt who runs a holistic health center. While costumed at a present-day Renaissance fair, Maggie follows a mysterious child and winds up in 1598, where, in addition to discovering that Francis Bacon was the true author of Shakespeare's plays, she meets Nicholas Layton, an aristocratic musician. They immediately fall in love, but he, just as quickly, dies in a fight while saving her from attackers. When Maggie returns to the 20th century (with a little help from her aunt), the reborn NickAnow a middle-aged rock musicianAis waiting for her. While clich?s mar the narrative's credibility (the "eternal quest" for love is overdone), this well-paced book will nevertheless appeal to her fans. (Nov.)
Copyright 1999 Reed Business Information, Inc. --This text refers to an alternate kindle_edition edition.

"She proves that love is timeless." -- -- Nora Roberts

"She proves that love is timeless." -- Nora Roberts --This text refers to an alternate kindle_edition edition.

4.1 out of 5 stars
4.1 out of 5
33 customer ratings
How does Amazon calculate star ratings?
Amazon calculates a product’s star ratings based on a machine learned model instead of a raw data average. The model takes into account factors including the age of a rating, whether the ratings are from verified purchasers, and factors that establish reviewer trustworthiness.
Top Reviews

Claire Sivertsen
5.0 out of 5 stars Good read
Reviewed in the United States on November 7, 2019
Verified Purchase
Good read by one of my favorite authors.
Read more
Helpful
Comment Report abuse

otolith
5.0 out of 5 stars Have not been disappointed with any of her books!
Reviewed in the United States on January 31, 2019
Verified Purchase
Love historical fiction!
Read more
Helpful
Comment Report abuse

Shelly Cordus
3.0 out of 5 stars A pleasant amusement
Reviewed in the United States on May 18, 2017
Verified Purchase
A fun and entertaining read. A romantic tale with an engaging heroine and a creative, if implausible, plot. A good airline choice.
Read more
One person found this helpful
Helpful
Comment Report abuse

Barbara H
5.0 out of 5 stars very good book
Reviewed in the United States on June 14, 2014
Verified Purchase
This is the kind of book that you don't mind reading again, years later. I enjoyed the book years ago when I first read it and still enjoyed it the second time around. I don't believe in time travel, but it adds some mystery to the story.
Read more
One person found this helpful
Helpful
Comment Report abuse

sg
3.0 out of 5 stars Once and Forever
Reviewed in the United States on October 27, 2012
Verified Purchase
I have read Constance O-Day Flannery's books in the past but did not enjoy this one. It was not one of those books that you did not want to put down. I would have been very disappointed if I had paid full price for a hardcover book but this was $7.99 for my Kindle. I will not keep on my Kindle for a later read.
Read more
One person found this helpful
Helpful
Comment Report abuse

Big Sky
5.0 out of 5 stars Once & Forever
Reviewed in the United States on July 15, 2013
Verified Purchase
I really enjoy Constance O'Day Flannery books. I have read several of her time travel ones and think they are nicely written and so much fun to read.
Read more
Helpful
Comment Report abuse

BP
5.0 out of 5 stars Mystifying
Reviewed in the United States on October 4, 2013
Verified Purchase
One of my most favorite authors, Once and Forever was truly the best story telling I have listened tools played with my heart. My heart is better for it. Thank you.
BP
Read more
Helpful
Comment Report abuse

Gloria
3.0 out of 5 stars Time Travel with romance and history
Reviewed in the United States on February 24, 2013
Verified Purchase
I enjoyed the book . I did not feel a real escape to another world the romance was not a sweeping era romance, where you feel swept away with emotions and the history was luke warm.
Read more
Helpful
Comment Report abuse
See all reviews from the United States

kathleen thomson
2.0 out of 5 stars oNCE AND FOREVER.
Reviewed in the United Kingdom on January 7, 2013
Verified Purchase
Sorry but i did not like this book .I was disappointed as i enjoyed Time After Time so much However i will try another one .Thanks Kathleen.
Read more
Helpful
Sending feedback...
Thank you for your feedback.
Sorry, we failed to record your vote. Please try again
Report abuse