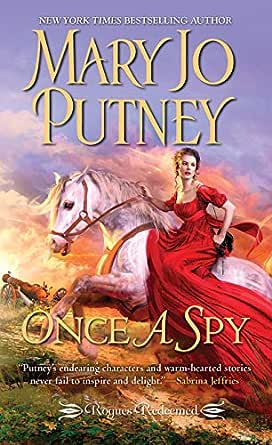 You've subscribed to Rogues Redeemed! We will preorder your items within 24 hours of when they become available. When new books are released, we'll charge your default payment method for the lowest price available during the pre-order period.
Update your device or payment method, cancel individual pre-orders or your subscription at
Your Memberships & Subscriptions
There was an error. We were unable to process your subscription due to an error. Please refresh and try again. 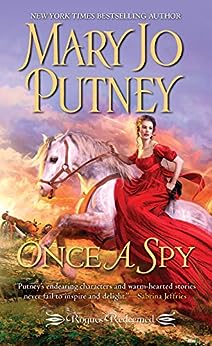 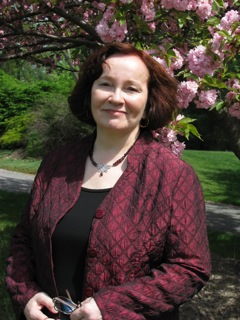 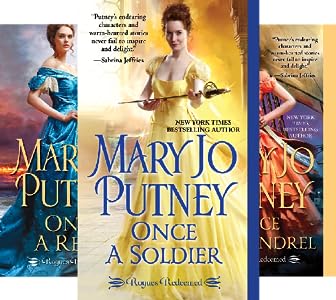 Mary Jo Putney is a New York Times and USA Today bestselling author who has written over sixty novels and novellas. A ten-time finalist for the Romance Writers of America RITA, she has won the honor twice and is on the RWA Honor Roll for bestselling authors. In 2013 she was awarded the RWA Nora Roberts Lifetime Achievement Award.  Though most of her books have been historical romance, she has also published contemporary romances, historical fantasy, and young adult paranormal historicals. She lives in Maryland with her nearest and dearest, both two and four footed. Visit her at maryjoputney.com. --This text refers to the mass_market edition.

4.4 out of 5 stars
4.4 out of 5
229 global ratings
How are ratings calculated?
To calculate the overall star rating and percentage breakdown by star, we don’t use a simple average. Instead, our system considers things like how recent a review is and if the reviewer bought the item on Amazon. It also analyzes reviews to verify trustworthiness.
Top reviews

Kindle Customer
3.0 out of 5 stars No cigar
Reviewed in the United States on September 24, 2019
Verified Purchase
Dithered between 3 and 4 stars. Putney's last couple of books seem written for topic rather than character. Rather rote execution of sexually-abused heroine seeking to recover. And the heroine-as-fierce-warrior meme in the author's books is likewise here perfunctory and not really developed. Waterloo sequence is pretty good, although Heyer's presentation in Infamous Army is the gold standard. Finally--our hero has a broken arm, a broken leg, and a concussion from a head wound--but in 48 hours is good for sex?? I am all for willing suspension of disbelief, but huh!

I feel as if Putney, like Kleypas and Balogh, are in their recent books just going through the motions. Still good writers who understand genre and period, but rehashing plots and characters. Sigh.

A. Richard
5.0 out of 5 stars Entertaining with captivating realism
Reviewed in the United States on September 24, 2019
Verified Purchase
While many storylines with a Regency setting are centered on attending balls and staying respectable, the fourth book in the Rogues Redeemed series is focused on relationship challenges and political turmoil. Although a man and woman are not looking to marry, circumstances would make their union advantageous. But there are personal issues that could keep the couple from ever being truly close. With the French not willing to give up fighting surrounding countries, the lives of these two individuals are thrown into increasing dangerous chaos. I have always liked when my romances are filled with historical information, and whether the details are fact or fiction in the story, I always believed in the possibility of the events actually occurring. Mary Jo Putney makes scenes in ONCE A SPY entertaining with captivating realism.

After the many battles with France ended when Napoleon resigned as its ruler, Colonel Simon Duval is ready to live more peacefully in England. Upon meeting the widow of his cousin, he immediately thinks they should marry. It would benefit them both, as Suzanne Duval has little funds and he is lonely yet is not seeking a loving relationship. Although she had not considered getting married again, the proposition is too good to reject. As Simon and Suzanne begin a new phase of their lives as husband and wife, they also agree to do their part in making certain the French never fight the English again.

Though Simon and Suzanne knew each other years ago, both have drastically changed because of several incidents in their lives, which caused them to think there could never be more than friendship between them. I really liked how they seldom let the past dictate them in the present, which proved just how resilient they had become. Simon is one of five men who escaped after being captured during a battle, and he ends up helping the English even after getting out of their army. What previously happened to Suzanne was a terrible ordeal, yet she has not let it keep her from trying to be content. I really admired both of them for how they persevered even when a new obstacle arose, and their reactions are always honest.

From London to Brussels and other less known places, Simon and Suzanne faced quite a few threats, and I felt as though I experienced each event. Anything dealing with real historical episodes seemed very true-to-life, and I though Ms. Putney skillfully wove her own imaginative thoughts in with specific facts. Background is given to let the reader know what took place in any prior books, and I was thrilled for the glimpses of couples who have been featured in the series. Rating – 4.5 Stars

I voluntarily reviewed the book, and all comments are my honest opinion
Read more
10 people found this helpful
Helpful
Comment Report abuse

Animal Lover
5.0 out of 5 stars TRUE LOVE IS UNSELFISH, PATIENT, EVERLASTING
Reviewed in the United States on October 4, 2019
Verified Purchase
5 Plus Stars! Another of Ms. Putney's well written beautiful love stories with many threads! Suzanne was introduced in the previous book (ONCE A SCOUNDREL) about Rory who was captive along with Suzanne in a harem. Now rescued, Suzanne makes her home in England instead of her native France. Colonel Simon Duval, weary by his years as a British intelligence officer (mother English, father French) - one of the 5 rogues - resigns his commission now that Napoleon's abdicated. He finds his cousin's widow, Suzanne Duval, the Comtesse de Chambron, working as a seamstress in very reduced circumstances. Simon is looking for peace and companionship and Suzanne is so scarred by her captivity as a harem slave, she wants and needs no man. Both believe there is no love in their future, but maybe a "friendship" marriage that would benefit both of their needs. Suzanne , while thinking over this unusual proposal, soon realizes how different Simon is. They first met when she was 16 before her wedding to his cousin, almost double her age. Simon treats her as a person and listens to her opinions and cares about her feelings. Never before had any man done so. She agrees and they get married. Fate is at work. Simon is looking for his long lost cousin who mysteriously appears in Belgium, and there are rumors of Napoleon escaping his captivity. Simon is drawn again into an almost certain war, with the Duke of Wellington enlisting his aid. There is a surprise - Suzanne's husband -the Comte's- natural son and his wife, who support Napoleon. The story is filled with adventures and twists, with two people who learn to trust and not allow their past to determine their future. The deep love that grows day by day between Suzanne and Simon is touching. She becomes a strong person who is willing to fight and do what must be done to save the one she loves. I also enjoyed the inclusion of characters from the earlier books in this series, and also from the LOST LORD series. A magical, wonderful, beautiful story of overcoming life's hardships and learning the greatest gift is Love!
Read more
5 people found this helpful
Helpful
Comment Report abuse

Ellen Myrick
5.0 out of 5 stars Wonderful
Reviewed in the United States on September 25, 2019
Verified Purchase
I liked the interweaving of the lIves of the men who escaped A Portugal. Basement and a dawn execution by firing squad. The developing relationship between Simon and Susanna was interesting. Also enjoyed relatives and friends met along the way. I will go back and read the previous Rogue novels. LOVED IT❤️❤️💋💋🐾
Read more
7 people found this helpful
Helpful
Comment Report abuse
See all reviews

Kindle Customer
5.0 out of 5 stars Darn Good
Reviewed in the United Kingdom on October 3, 2019
Verified Purchase
I liked this book and enjoyed reading it,the story line flowed well and was believable.The characters developed slowly and were also believable.The continuing lives of one of her other books feels like you have met them and know the characters personally.A another book of her's has been ordered.☺
Read more
Report abuse

Mrs CM Rodgers
5.0 out of 5 stars A great story
Reviewed in the United Kingdom on October 24, 2019
Verified Purchase
I love the napoleonic era and hope to read more in this series
Read more
Report abuse

Moose Girl
3.0 out of 5 stars Enjoyed it
Reviewed in the United Kingdom on January 15, 2020
Verified Purchase
Not my favourite in the series, but I enjoyed it.
Read more
Report abuse

SCC
2.0 out of 5 stars Just going through the motions
Reviewed in Australia on October 8, 2019
Verified Purchase
Another tedious read from this author and it took me a few days to get through it too. I feel like the author is phoning it in and not making any effort with dialogue, characterisation, or scene setting. I really wonder what has happened because I used to pounce on her books as soon as they were published and read straight through. Put it this way, if this was the first book I read by this author, I might not have bothered to finish and I certainly wouldn’t go searching through the back catalogue. Having said that, it also felt like the book was written by two authors. The majority of the book is pedestrian but once it gets to Waterloo, it picks up considerably and becomes a halfway decent read. I feel a bit bummed. I second the comments by another reviewer noting that Heyer’s Infamous Army sets the benchmark.
Read more
Report abuse

CMart
1.0 out of 5 stars The book is not downloaded on my Kindle
Reviewed in Canada on September 28, 2020
Verified Purchase
where is my book? Was supposed to " Start to read now on your Kindle." It is not there. This is the first time I have problem. What is happening
Read more
Report abuse
See all reviews