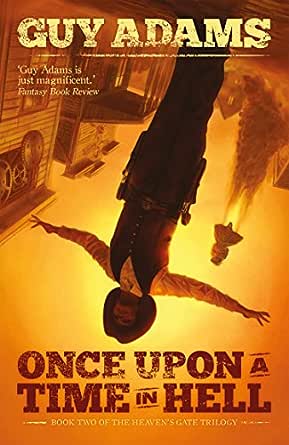 You've subscribed to Heaven's Gate Trilogy! We will preorder your items within 24 hours of when they become available. When new books are released, we'll charge your default payment method for the lowest price available during the pre-order period.
Update your device or payment method, cancel individual pre-orders or your subscription at
Your Memberships & Subscriptions
There was an error. We were unable to process your subscription due to an error. Please refresh and try again. 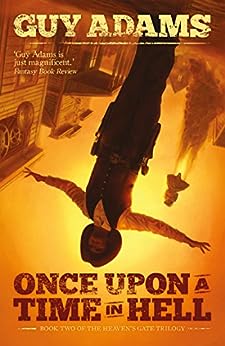 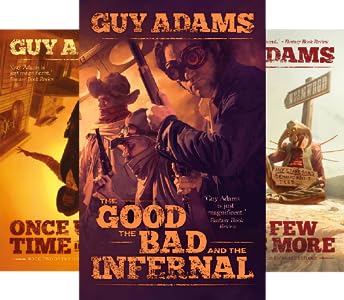 Guy Adams trained and worked as an actor for twelve years before becoming a full-time writer. If nothing else this proves he has no concept of a sensible career. He mugged someone on Emmerdale, performed a dance routine as Hitler, and spent eighteen months touring his own comedy material around clubs and theatres. He is the author of the bestselling Rules of Modern Policing: 1973 Edition, a spoof police manual ‘written by’ DCI Gene Hunt of Life On Mars. Published by Transworld, it has sold over 120,000 copies. Guy has also written a two-volume series companion to the show published by Simon & Schuster; a Torchwood novel, The House That Jack Built (BBC Books); and The Case Notes of Sherlock Holmes, a fictional facsimile of a scrapbook kept by Doctor John Watson. Carlton Books published it in 2009 in association with the Estate of Sir Arthur Conan Doyle, to celebrate the 150th anniversary of the writer’s birth. --This text refers to the mass_market edition.

William Clemo
5.0 out of 5 stars Look forward to the final one!
Reviewed in the United States on June 22, 2014
Verified Purchase
This one sets up the finale with great aplomb and firepower. You're not really sure of the sides until the end and even then it isn't exactly clear. Which is great! If you know how it is going to end...why finish? Look greatly forward the the third!
Read more
2 people found this helpful
Helpful
Comment Report abuse

Erik W Pepper
5.0 out of 5 stars Great second read!
Reviewed in the United States on May 23, 2014
Verified Purchase
Fast paced and exciting! Of course ends beautifully painful... I want the next book! ASAP! Great cast of characters that are all strange and different from one each other. If you enjoyed the first in this trilogy, you'll love this one.
Read more
Helpful
Comment Report abuse

A. Khromov
5.0 out of 5 stars another good read
Reviewed in the United States on April 22, 2015
Verified Purchase
Continues the story from "the good, the bad, and the infernal". Well worth reading, but read the first book before this one.
Read more
Helpful
Comment Report abuse

Thomas Randolph
5.0 out of 5 stars Must Buy
Reviewed in the United States on April 30, 2014
Verified Purchase
I read the first one. GREAT BOOK! I highly recommend this just based off the first one but I cannont wait for it to arrive to read it!
Read more
Helpful
Comment Report abuse

Pop Bop
TOP 50 REVIEWER
4.0 out of 5 stars A Hot Time in the Old Town
Reviewed in the United States on May 17, 2014
This is book Two of the Heaven's Gate Trilogy. You don't need to have read Book One if you're willing to be in the dark for a few chapters until the characters fall into place. (By the way, you might classify this book as weird fiction or bizarro, but I didn't see much in the way of steampunk, despite blurbs to that effect.)

The setup here is that a gateway to the afterlife has opened in the desert of the American southwest. The gateway appears as the town of Wormwood, which looks just like an old time wild west town. A multitude of people were called to Wormwood and a large and diverse array of misfit pilgrims have made it. (Book One covers that part of the tale.) Once Wormwood appears and the gateway opens, what will each person find? The gateway only opens once every hundred years, and we don't know if it leads to heaven, hell, or something else.

There are several dozen characters who are identified in the first chapters, and we focus on about a dozen of them as the story progresses. Some are lost, some are found, some are good, some are bad, some are evil. Some are otherworldly in a demon/creature sort of way and some are ordinary Joe's. If there is any character you aren't crazy about or interested in, well another one will enter on the stage shortly.

The strength of this book, to me, is the very different voices of the characters. Some are funny, some are sad, some are hard, some are lost. The author gives each a distinct voice and personality, and this is one of the few big cast books that works. We are helped by the fact that the narrator for the first part of the book, (a sort of meta-author who also comments on the book as a book), soon gives way to an everyman character, Elwyn, who is observant, funny and pretty much resigned to go with the underworld flow.

As our characters work their ways through the afterlife obstacles set before them we get to see a wildly inventive author having fun with a wildly inventive premise, and there are some set scenes and bits of dialogue or business that are priceless. None of it is cute or precious and the author never tries to out-clever or deep-meaning the reader. (For that, read a modern Dante translation.)

I don't know where this trilogy came from in terms of Book One, and we don't know ultimately where it will go, but if this is the middle, and middles are traditionally sort of lame, "Heaven's Gate" will be a trilogy to reckon with.

Please note that I received a free ecopy of this book in exchange for a candid review. Apart from that I have no connection at all to either the author or the publisher of this book.
Read more
4 people found this helpful
Helpful
Comment Report abuse

Dave Wilde
4.0 out of 5 stars Dante's Inferno Meets Alice In Wonderland
Reviewed in the United States on February 14, 2014
If you have read both Dante's Inferno and Carroll's Alice In Wonderland, you may consider yourself mildly prepared for this book. I might also suggest Doug Adams' hitchhiker series in preparation. Of course, you could also read the first book in the trilogy. I didn't, but that doesn't mean you shouldn't.

In many ways, this is the strangest book you will ever read. The dueling first person narratives don't help. Nor do the innumerable stars. It's a weird western and the concept is that Wormwood appears for one day every hundred years and it's worth risking life and limb to get to because it's a doorway into heaven and hell. Welcome to your tour of the afterlife and the phantastical creatures you will find within.

Angels and devils galore. And a battle is to begin that just might lay the universe to waste.
At one point, Elwyn's company consists of a succumbus with tentacles, an age old card cheat, a giant dog, a talking tree, and an invisible man.

At first I found this book confusing especially as it switched between narratives, but once the story crossed into the other side and memories and lives are bet at the card table, the book was one I couldn't put down. Can't wait for part three of the trilogy.
Read more
4 people found this helpful
Helpful
Comment Report abuse

Teresa Pietersen
4.0 out of 5 stars From a self confessed Guy Adams fan
Reviewed in the United States on March 4, 2014
Second in the trilogy and would advise reading The Good, The Bad and The Infernal first. It not only gives you the characters back stories but also gets you into the feel of Adam's writing.
He's one of the most creative authors and comes up with brilliantly written characters and incredible story lines.
(I was hooked after reading his World House and Restoration, which I highly recommend.)
This trilogy takes a group of misfits, from all walks of life on a pilgrimage to Wormwood, a town which appears out of nowhere and allows access into the afterlife, or heaven as some believe.
It is written in several first person accounts, which I think makes it more personal for each character, though some say that confuses, I didn't find it so. My only gripe was that the ending comes at you quickly and leaves you wanting the next book in the series to be available, like now!
Guy Adams may be an acquired taste but for those who enjoy the strange, weird and the very different he really delivers very well written and satisfying novels.
Can't wait for his next.
Read more
2 people found this helpful
Helpful
Comment Report abuse
See all reviews from the United States

Mand
5.0 out of 5 stars Amazing storytelling
Reviewed in the United Kingdom on February 2, 2015
Verified Purchase
I groaned when I got to the last page.. I didn't want this book to finish. Thank goodness there is the third book.
Read more
Helpful
Sending feedback...
Thank you for your feedback.
Sorry, we failed to record your vote. Please try again
Report abuse