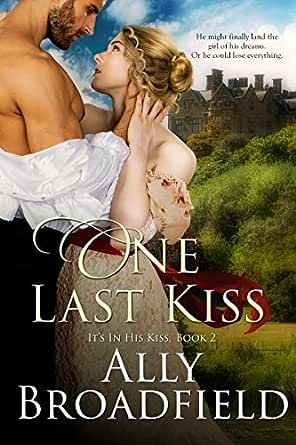 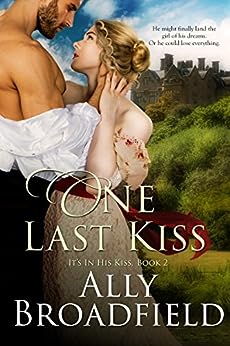 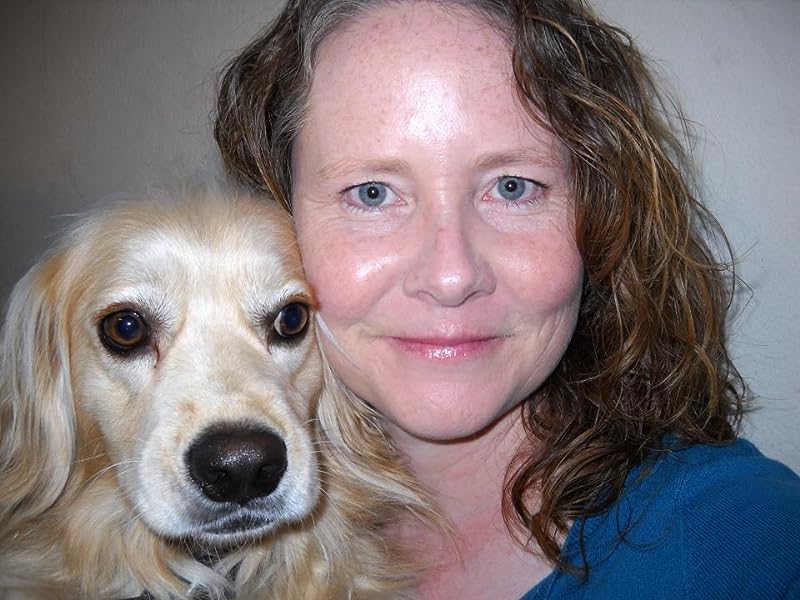 One Last Kiss (It's in His Kiss Book 2) Kindle Edition

Beyond your wildest dreams
From DC & Neil Gaiman, The Sandman arises only on Audible. Listen free with trial
click to open popover
Books In This Series (2 Books)
Page 1 of 1Start OverPage 1 of 1
Previous page
Next page
Complete Series

"One Last Kiss is the second novel in Ally Broadfield's It's In His Kiss series and is a deeply enjoyable historical romance featuring a wonderful love story, plenty of chemistry and delectable characters." - Rachel, The Best is Still Unwritten
"This was a easy, sweet read that I really enjoyed!" - Sissy's Romance Book Review For You
"I really enjoy how this author manages to write such highly entertaining banter between her characters, making it easy to visualize their encounters, expressions and emotions. The political intrigue, with double dealing, secret keeping and so much more together with the well defined characters make this an engagingly different read, with the unusual focus on the role of Russia and Russians in the impending war against Napoleon... I've said it before and I'll no doubt say it again - I can't wait to read more in this series and others by this author in future!" - Elaine, Goodreads.com review
"One Last Kiss is remarkable because it's very distinctive, as it shows us the Russian side of the war, all the characters are very well defined, and Anna and Misha are very engaging; the romance is absolutely lovely!" - Monique D., Goodreads.com review
"Their attraction is amazing... I was on the edge of my seat when Anna was in danger from a dangerous enemy. Ally Broadfield did a wonderful job with One Last Kiss. Like Anna, I fell in love with Misha... The characters are well written and charismatic and the story has unexpected twists. This was an entertaining book that has heart." - Rosemary K., Goodreads.com review
"It gives you warm fuzzies and leaves you feeling content." - Meghan, Lady with a Quill
Ally's Book List:
It's in His Kiss Series
Just a Kiss
One Last Kiss
How To Series
How to Beguile a Duke
How to Bewitch an Earl
How to Bewilder a Lord (coming March 2017)
Unexpected Suitor Series
Say You'll Love Me

3.9 out of 5 stars
3.9 out of 5
16 customer ratings
How does Amazon calculate star ratings?
Amazon calculates a product’s star ratings based on a machine learned model instead of a raw data average. The model takes into account factors including the age of a rating, whether the ratings are from verified purchasers, and factors that establish reviewer trustworthiness.
Top reviews

CynTop Contributor: Cooking
TOP 1000 REVIEWERVINE VOICE
4.0 out of 5 stars Danger is near when to friends from long ago fall in love all over again.
Reviewed in the United States on January 14, 2017
Verified Purchase
Between these pages you will find a delightful romance with intrigue, spies, that are full of chemistry, childhood crush, and delightful fun characters in this well written read. I really enjoyed the plot of young love having a second chance. The book starts off with us getting to know Princess Anna and Captain Abromovich as the author takes us back to their younger days when each loved the other in secret only to come face to face years later both still very attracted to the other. Mikhail knowing he cannot give Anna what she needs with his background of spying and moving around, he tries his best to step aside but duty calls and he must use her coming out to try and get the information he is looking for.

The threat of Napoleon invading Russia Anna father sends her and her sister to London with their aunt and uncle in hopes of keeping them safe. Once he settles things there he hopes to join them. Ann starts her season but with the news of her rich dowry is leaked out she has more suitors that is only after her money than she can handle. With none that appeal to her she is at a lost until her childhood friend from long ago comes forward. She welcomes her old friend with open arms not knowing he is hiding secrets and could be using her to reach his goal she falls head over heels for him all over again.

Mikhail is on a mission to achieve his goal he is under orders to court Anna. This is something he really doesn’t want to do because he has loved her for a long time. His only thought is what will she do and think if his deeds are every uncovered and she thinks he really doesn’t love her for who she is. Will they get this second chance at love or will their love be torn apart?

I really enjoyed this read watching love bloom as these two falls for each other again. I loved the twists and turns in a plot that was very entertaining mixing fact with fiction in a very intriguing story that is well written with delightful characters. I loved how easy it was to like Anna when the going got tough she stood her ground but was still very much a lady that has no trouble showing her spunk when needed. Mischa was not only handsome but true to his cause. My heart really went out to him that he followed the orders given but truly loved Anna and did his best to show her. This story has such depth from the characters to the plot that it really pulls you in. I enjoyed the supporting characters loved how Anna and her sister got along and taught each other how to be sneaky. They are both a little on the cheeky side which really made them believable characters. I even found a few chuckles and laughs along the way. The author gives such detail to each scene that you have no trouble picturing them as they unfold. With a very delightful plot and characters it is a very believable story. I can’t wait to see who she picks next in this wonderful series.

Montessori Librarian
5.0 out of 5 stars Intrigue, spies, and a second chance at true love.
Reviewed in the United States on February 28, 2020
Verified Purchase
This story, is set during the Napoleonic Wars, is full of intrigue, spies, and a second chance at true love. With Napoleon's invasion of Russia looming on the horizon, Anna Tarasova, a Russian princess, and her younger sister are sent to live with her relatives in England. Little did she know that her childhood sweetheart, now a Captain in the Russian army, would also be sent to England. Though they're both as attracted as ever to one another, he is harboring secrets that could make it impossible for them to ever be together.
Read more
Helpful
Comment Report abuse

Janine O
3.0 out of 5 stars OK story, very light.
Reviewed in the United States on February 16, 2017
Verified Purchase
A bit too predictable for me. The tension between countries could have been more intense to give the plot more interest. Well written, tho'.
Read more
Helpful
Comment Report abuse

To begin with, upon seeing the blurb, I knew Ms. Broadfield would get everything Russian right, and thus merits a full, shiny star. The Russian last names, patronyms, nicknames are all spot on; nothing was left to chance, and it’s also evident that she did extensive research to make the story as authentic as possible, for which I will be eternally grateful. The historical context is impeccable, and most intimately tied in with the romance. I loved the abundance of little details, which served to enrich the story while not detracting from it.

While the premise seemed rather predictable from the onset, I knew my heart was eventually going to break for both Anna and Misha. They had not seen each other in six years, and I very much appreciated that while Anna’s love for Misha never faltered, she was nevertheless cautious and reasonable and needed to make sure that what had once been was still there, and this from both sides. The prose is subdued and sublime, with a bittersweet undertone that reflects the melancholy of the Russian soul, as well as the inevitable heartbreak that will crush both Anna and Misha. There were a few little things that marred the whole, among others when a romantic moment occurs, a mishap involving puppies made the interlude somewhat unsavoury for me, and I was perplexed at addressing a Russian princess by her first name! However, where I had thought a misunderstanding unnecessary, I was proved wrong, as a national disaster was barely averted. ONE LAST KISS is remarkable because it’s very distinctive, as it shows us the Russian side of the war, all the characters are very well defined, and Anna and Misha are very engaging; the romance is absolutely lovely!

I received a complimentary copy of this book in exchange for an honest review.
Read more
4 people found this helpful
Helpful
Comment Report abuse
See all reviews from the United States

whalepower
3.0 out of 5 stars Enjoyed this book
Reviewed in the United Kingdom on September 4, 2018
Verified Purchase
Did really enjoy the book but preferred the first in this series. The other series by this author are really good
Read more
Helpful
Sending feedback...
Thank you for your feedback.
Sorry, we failed to record your vote. Please try again
Report abuse