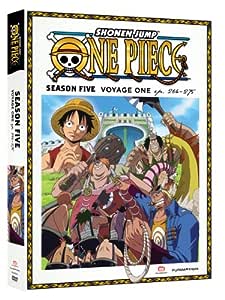 One Piece: Season 5, Voyage One

Monkey D. Luffy refuses to let anyone or anything stand in the way of his quest to become King of All Pirates. With a course charted for the treacherous waters of the Grand Line, this is one captain who'll never drop anchor until he's claimed the greatest treasure on Earth: the Legendary One Piece! Along for the ride are his loyal crewmates, a wonderfully-bizarre collection of outcasts and misfits from the far corners of the world. Each member has their own special talent, and they'll utilize their skills to help Luffy achieve his dream! Together, the rubberman and his crew can conquer any challenge - or defeat any foe!

Fists, bullets, and weapons fly as the "Enies Lobby" story arc of One Piece continues. With tippling Granny Kokoro at the throttle, the seatrain Rocketman delivers Luffy, the rest of the Straw Hats, and the members of the Franky Family to Enies Lobby. This World Government facility is run by Spandem, who oversees show trials that condemn prisoners to captivity, torture, and death, in a mockery of justice. Ferocious comic battles rage in the streets, as Luffy releases all his gum-gum attacks. But when he faces Blueno, a member of Spandem's Cipher Police #9, Luffy ramps his powers up to "Second Gear" and beats the villain into so much mochi. Robin once again tells Luffy to go away: she didn't ask to be rescued. She should have saved her breath. Luffy remains as mule-headed as ever and insists that even if she chooses to die, she'll do it as a member of his crew. The filmmakers clearly have fun with Ussop's pose as the masked superhero Sogeking: they even show the opening of the character's imaginary TV program. Most of the characters see right through the disguise, but Luffy and Chopper regard him with a fanboy's awe. Spandem is no stranger-looking than anyone else on One Piece, but he's meaner than the villains Luffy and his crew usually encounter. His sadistic rants give these episodes an edge other One Piece storylines lack. As the viewers--and the other characters--start to learn about Robin's unhappy childhood, the Straw Hats face down Spandem's Cipher Police agents, preparing for the impending showdown. (Rated TV 14: cartoon violence, violence against women, minor risqué humor, alcohol and tobacco use) --Charles Solomon

(264. Landing Operations Start! Charge In, Straw Hats! 265. Luffy Cuts Through! Big Showdown on the Judicial Island! 266. Battle Against Giants! Open the Second Gate! 267. Find a Way Out! Rocketman Takes Flight! 268. Catch Up with Luffy! The Straw Hats' All-Out Battle! 269. Robin Betrayed! The Motive of the World Government! 270. Give Robin Back! Luffy vs. Blueno! 271. Don't Stop! Hoist the Counterattack Signal! 272. Almost to Luffy! Gather at the Courthouse Plaza! 273. Everything Is to Protect My Friends! Second Gear Activated! 274. Give Us Your Answer, Robin! The Straw Hats' Outcry! 275. Robin's Past! The Girl Was Called a Devil!)

Andrew
5.0 out of 5 stars Must have for any One Piece fan
Reviewed in the United States on July 27, 2013
Verified Purchase
The Enies Lobby Arc is finally getting dubbed and Funimation shows why it's one of the best companies to dub anime. The episodes go from the start of the invasion to the first part of Robin's backstory. All of the voices are done great for the most part (only one I didn't like was Oimo). The lines are not exactly the same as the Japanese version, but they don't detract from the plot and they can even make it funnier at times. The only thing that I didn't like was that the subtitles were for the Japanese audio only and there weren't any for the English version along with dubbing unnecessary parts like a sweepstakes that was only available in Japan. All in all, this is a great dub that is glorious to see in HD and should be watched by anyone who calls themselves a fan of One Piece.
Read more
3 people found this helpful
Helpful
Comment Report abuse

Elizar
5.0 out of 5 stars My Review for One Piece: S5, voyage 5
Reviewed in the United States on February 16, 2014
Verified Purchase
Hey Folks,

Another great voyage put by Mike and the entire staff. The dvd starts us off after the CP9 defeat and the funeral of the Going Merry. The straw hat crew remains in Water 7 planning and re-grouping for their next adventure. We see several special guest throughout the dvd. One gives us a much needed glimpse into Luffy's background. The other one foreshadows a upcoming event that might have everlasting repercussions. There are a few fillers episodes but very entertaining and insightful. If you are following or/but haven't seen it this dvd will continue the one piece tradition. If you have seen it before the dvd just takes you on a similar journey the original did. I loved the voices and there a looking how the studio records the voices. Hopefully the reviews haven't spoiled once for you. Go out and pick up a copy today. Please continue to support One Piece here and the hard and authentic work they put into it. Thank you

Kayla
5.0 out of 5 stars What Else Can We Say?!
Reviewed in the United States on January 9, 2014
Verified Purchase
It's One Piece, who can say it is anything but spectacular. I do have to say that I can't recall how many are on this disk, but there are quite a few fillers that may drive you a bit nuts. Personally I skipped them since they had nothing to do with the main storyline. But at least they weren't as bad as some other Anime's (such as the 6 seasons worth of fillers in Naruto! UGH!)...

Either way I am positive you will love this.
Read more
Helpful
Comment Report abuse

TeeTee06
5.0 out of 5 stars Great Animation and fun for older audiences.
Reviewed in the United States on August 29, 2014
Verified Purchase
I bought this for my son who is a big fan of this series. He was very pleased.
I have watched it with him and like the rest of the series it is entertaining, and the
animation is some of the best out there. While this is definitely not a cartoon for
younger viewers, it is a fun and enjoyable animation for teens and adults without being
over the top.
Read more
Helpful
Comment Report abuse

Kayla
5.0 out of 5 stars WHAT CAN I SAY?! ONE PIECE ROCKS!!!
Reviewed in the United States on January 23, 2014
Verified Purchase
Yes!!! We finally get the finale of this part of the journey. We get to meet Luffy's Grandfather Garp, and hear about his Father Dragon. We get a few extras, but not a huge amount. Then it ends with our pirates heading out to sea in order to head towards fishman island. If this doesn't excite you, I don't know what will.
Read more
2 people found this helpful
Helpful
Comment Report abuse

darien harris
5.0 out of 5 stars Five Stars
Reviewed in the United Kingdom on March 31, 2018
Verified Purchase
very happy with the item with n problem at all
Read more
Report abuse

Amazon Customer
5.0 out of 5 stars Another Journey
Reviewed in the United Kingdom on November 5, 2013
Verified Purchase
This box set continues to cover the Water Severn/Enes Lobby Arc and follows the manga. Worth the watch.

Derek Driedger
5.0 out of 5 stars ENTER ENIES LOBBY!
Reviewed in Canada on March 17, 2014
Verified Purchase
All aboard! Get ready for a plate of awesome when you pop these discs into the DVD player. Very happy with this item!
Read more
Report abuse
See all reviews

Page 1 of 1 Start overPage 1 of 1
This shopping feature will continue to load items when the Enter key is pressed. In order to navigate out of this carousel please use your heading shortcut key to navigate to the next or previous heading.
Back
Next
Pages with related products. See and discover other items: one piece movie, one piece movies