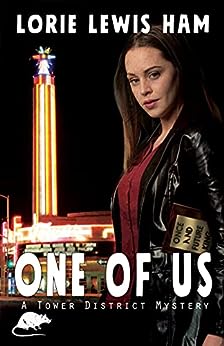 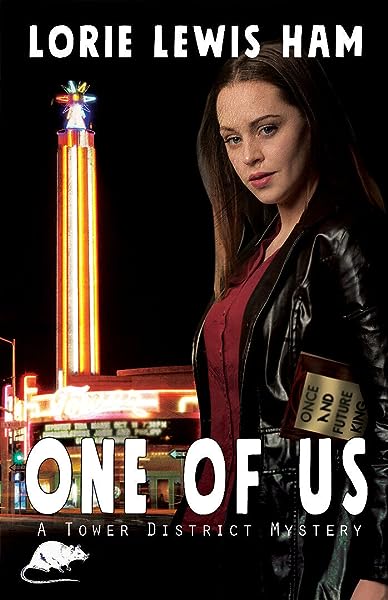 At 35, children’s book author Roxi Carlucci finds herself starting over again after her publisher drops her book series. With no income, she has to pack up her life on the California Coast, along with her pet rat Merlin, and move in with her cousin, P.I. Stephen Carlucci, who lives in Fresno, CA. The one redeeming factor is that Stephen lives in the Tower District—the cultural oasis of Fresno.

Stephen talks Roxi into helping out with a community theatre production, which is also a fundraiser for a local animal rescue. Little did she know that someone would be murdered during a rehearsal, and that she and Stephen would be hired to find the killer. The killer has to be one of Roxi’s new acquaintances since the theatre was locked at the time of the murder, but no one seems to have a motive. How can they solve a murder without a motive? Could the local gossip website hold any clues? Can they stop the killer before they strike again?

Praise for One of Us-

An entertaining mystery with a unique setting—the Tower District in Fresno. And an adorable pet named Merlin. He's a rat. Trust me on this -- you'll love clever Merlin.

In her new novel, Lorie Lewis Ham brings the Tower District of Fresno charmingly alive. I loved the charming, quirky, instantly endearing Roxi with her love of all things King Arthur and Sherlock Holmes, her pet rat Merlin, her intense curiosity about everything and her eagerness to plunge into her new life. That plus the Mafia family she’s trying to disassociate from, the circle of new friends, and a fast-paced mystery makes One of Us a treat for mystery readers and a fab start to a promising new series. 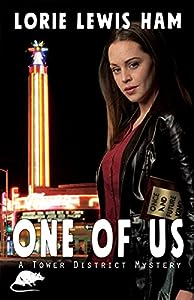 Lorie Ham, aka Lorie Lewis Ham, lives in Reedley, CA and has been writing since she was a child. Her first song and poem were published when she was 13 and she has gone on to publish many articles, short stories, and poems throughout the years as well as write for a local newspaper. Four out of her 6 published mystery novels feature gospel singer Alexandra Walters and are set here in the San Joaquin Valley. She just released the first in a new series set in the Tower District of Fresno and featuring an entertainment podcaster/part time P.I. The new book is titled "One Of Us." She has also been the publisher of the online magazine Kings River Life for the past 11 years (www.kingsriverlife.com) and launched a mystery podcast (https://mysteryratsmaze.podbean.com/) just over 3 years ago. You can learn more about her writing on her author website mysteryrat.com

Evelyn Cullet
4.0 out of 5 stars A Real Cozy
Reviewed in the United States 🇺🇸 on November 24, 2021
Verified Purchase
I liked the main character, Roxi, and her pet rat. They move to Fresno to begin a new life, and she starts working with her cousin, a handsome private investigator in the Tower District, on a murder case. There are too many suspects, but no motives, until the end. There’s a lot of talk about the case with the suspects, a lot of restaurant visits, a lot of description about the area, and I got the idea that the heat in Fresno was stifling, but there wasn’t much action or suspense. which is what makes it a real cozy mystery. References to old movie stars and Camelot added to the coziness.
Read more
Helpful
Report abuse

gmt
4.0 out of 5 stars Murder with a theater setting
Reviewed in the United States 🇺🇸 on October 20, 2021
Verified Purchase
Cozy mystery fans will really enjoy this book. Lorie Lewis Ham has started a series that will appeal to readers on so many levels. Children’s book author Roxie moves to Fresno to live for awhile with her cousin while she looks for work. When she gets drawn into helping with a community theater production, little does she know that the script includes murder and the cast of characters provides plenty of suspects she can draw on. A intriguing puzzle, interesting characters, and plenty of friendly pets.
Read more
Helpful
Report abuse

Kate Thornton
5.0 out of 5 stars Fresno? Yeah, Fresno!
Reviewed in the United States 🇺🇸 on September 12, 2021
Verified Purchase
Roxi Carlucci, a children's book writer, loses her publishing contract and moves from her quaint California coastal town to stay with her cousin in Fresno. Her charming – and handsome – cousin Stephen is a private investigator who offers her and her pet rat Merlin not only a place to stay, but a new life in Fresno's arts district, The Tower. But The Tower harbors more than art galleries, bookshops, and hip cafes as murder strikes the company of a theater production and Roxi is drawn into a world of gossip, blackmail, and lies. Sherlock Holmes, Excalibur, old movies, and quirky actors keep things interesting in this latest fun read by Lorie Lewis Ham. Let's hope we see more of Roxi in books to come. And yes, more of Fresno!
Read more
One person found this helpful
Helpful
Report abuse

Jl
4.0 out of 5 stars Clever mystery, fun characters
Reviewed in the United States 🇺🇸 on August 20, 2021
Verified Purchase
Well plotted, great dialogue, lots of detail on local setting.
Roxie is a lot of fun..hope she becomes a regular …good setup for a series, one that I look forward to reading!
A lot of names to keep track of, tho…
Read more
One person found this helpful
Helpful
Report abuse

Robert Daniels
5.0 out of 5 stars Fantastic who done it!
Reviewed in the United States 🇺🇸 on August 30, 2021
Verified Purchase
Such a fun read! Great character's and a great start to a series set in my home town of Fresno CA! Even better set in our wonderful artsy district known as the Tower District!
Moves along at a nice pace for the reader as they get to know this wonderful cast of people!
And the ending? No spoilers. You're gonna have to read it for yourself!
Read more
One person found this helpful
Helpful
Report abuse

Muddy Rose Reviews
5.0 out of 5 stars A Lively Theater-based PI novel
Reviewed in the United States 🇺🇸 on September 29, 2021
Verified Purchase
One of Us is a lively theater-based PI novel set in Fresno, CA, featuring Roxi Carlucci at a turning point in her life. Roxi and her cousin get tapped to find the stage manager’s killer. This first-in-series weaves fine actors, decadent coffee, pet fun, and cagey suspects in a fast-paced, light-hearted read.
Read more
Helpful
Report abuse

Karan Johnson
5.0 out of 5 stars A Fun Mystery
Reviewed in the United States 🇺🇸 on August 12, 2021
Verified Purchase
This is a quick, fun read. I loved that the location - Fresno’s Tower District - is so much a part of the story. It has an endearing heroine whom I’d like to see more of. So many things in this book - Star Trek, theatre, pets (dog, cat, rat) are favorites of mine. Looking forward to more adventures in The Tower.
Read more
One person found this helpful
Helpful
Report abuse

J. Christensen
5.0 out of 5 stars Interesting characters, location, and crime
Reviewed in the United States 🇺🇸 on August 8, 2021
Verified Purchase
An intriguing puzzle mystery, One of Us by Lorie Ham is a page-turner. Loved all the characters, and didn't guess who the murderer was. Of course, I had suspicions, but I suspected some others, as well.
Read more
One person found this helpful
Helpful
Report abuse
See all reviews
Report an issue
Does this item contain inappropriate content?
Report
Do you believe that this item violates a copyright?
Report
Does this item contain quality or formatting issues?
Report