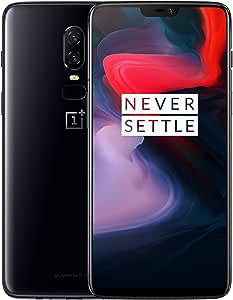 Visit the OnePlus Store
4.6 out of 5 stars 1,220 ratings
| 105 answered questions
Available from these sellers.
See more

Breeze through apps with little to no load times, or shift quickly between gaming, working and browsing. We didn’t design our features to win speed tests. We did it because we want to enable you to do more in less time.

4.6 out of 5 stars
4.6 out of 5
1,220 global ratings
How are ratings calculated?
To calculate the overall star rating and percentage breakdown by star, we don’t use a simple average. Instead, our system considers things like how recent a review is and if the reviewer bought the item on Amazon. It also analyzes reviews to verify trustworthiness.

Midhinesh Raparthy
1.0 out of 5 stars the Phone is good, but dont buy it from this seller.
Reviewed in the United States on September 9, 2018
Color: Midnight BlackVerified Purchase
The Heading was A6003, but I got the A6000 version.
Read more
45 people found this helpful
Helpful
Report abuse

Joe
4.0 out of 5 stars My absolute best smartphone
Reviewed in the United States on November 14, 2018
Color: Mirror BlackVerified Purchase
With the smartphone market now saturated with over-priced or under-valued phones, the Oneplus 6 is just the answer to all demands I have with a smartphone. I consider myself quite savvy with electronics, and I must say, the OnePlus 6 is quite a sight to behold! The snapdragon 845 is extremely powerful (albeit it does get slightly hot when performing demanding tasks, to be expected from such a powerful chip) and should deliver quality performance for years to come. I do not typically purchase a new phone unless its free with an upgrade, but every passing day signifies the completion of a new milestone in technology, thus resulting in the need for better hardware. I really REALLY love that they kept the headphone jack and will not be buying the oneplus 6t or any model hereafter that does not include one. The battery I will admit, is lacking after a day of power usage, however with dash charging I have not found carrying my charger and charging once or twice a day to be inconvenient at all. Oxygen OS is a blessing from the Android Gods, and I feel it necessary to include that one of the strongest aspects of this device is the skin OnePlus has integrated over stock Android. This is not quite the nexus line in terms of open android (custom roms are extremely hit or miss, which I find to be annoying, but I can live with it for now) however time may prove it to be even better. I say I find the lack of custom ROMs and slow development to be annoying, but this may just be old habits stemming from associating proprietary skins with useless and wasteful bloatware/features that have no practicality whatsoever, something that Oxygen OS absolutely lacks. Every feature they include is useful, and the 2 applications I could consider "bloatware" are easily removed even without a Terminal Emulator. Needless to say I intend to run this thing for 2, maybe 3 years, and based on my initial impressions, I have no doubt that it will stand strong against the test of time. Phenomenal

Now for cons, this phone does not have many, but the most stand-out issue is the lack of proprietary heat dissipation. There is no heat pipe or thermal solution whatsoever in this device. This is slightly mitigated by the all-glass design (which in itself is NOT a con, check with speedtest) which allows the heat to be quickly absorbed and dissipated throughout the body. however this does irk me as heat will be the death of this phone. All things considered, given OnePlus' reputation for outstanding engineering and rigorous manufacturing/approval process, I have faith that the engineers have already investigated this and trust that their decision to not include such things is indeed for reasons other than cost cutting. It is something to note, however, and I take off one star entirely for this reason and this reason alone. Other than that, this device is almost flawless.

Note: Some people may consider the 2280x1080 display as being a con, however 1440p on a screen this small only enhances visuals so well and demands much more of the core components inside causing even more heat and worse battery life. For people that list this as a con, scroll to about phone, tap "Build Number" until you unlock developer options, and then search through developer options until you see "Force 4x MSAA" and enable this feature. Though it won't be the physical pixel density associated with 1440p, this should prove satisfactory to those who believe the display to be limited by its resolution. In my opinion however, the 1080p display is more than enough and I believe most people would agree that 1440p might be a little overrated for a 6.3" display

Note: Some people may also complain about the speaker being low output/mono/tinny at high volumes and while this is a valid complaint please do remember it has a headphone jack and may be the last time we get to see one. I mitigate the subpar speaker based on the fact that I can plug it into any speaker I want. This does not EXCUSE OnePlus for incorporating such a pathetic audio solution, they simply "dodged a bullet" with that particular criticism as the industry is generally omitting the headphone port altogether

Juan Pedro Libralato
5.0 out of 5 stars Beware the model is actually A6000 and not A6003!
Reviewed in the United States on November 12, 2018
Color: Midnight BlackVerified Purchase
Being clear about the model that I got (Asian one, not the European/North American), I'm very pleased with it. My prior model was the A3000, so maybe the comparison comes a little bit outdated. I'm very pleased with the boost the camera got (now dual), pictures look sharpier and colourful (I guess the Optic AMOLED display also has something to do with that). The battery life as managed by the OS, lasts longer. Also the body seems sturdier and I couldn't be happier with the speed you get both from face recognition and/or fingerprint sensor (now in the back). Getting accustomed to the notch comes rather easier than I thought, even so having both notch sides for notifications is very welcomed. Oxygen OS is swift and clean as ever, with the usual personalization being friendly and straightforward. Being so close to the release date and because of being on a tight schedule, I couldn't actually get my hands on a 6T, which it's ok for me since the 3.5mm audio jack removal it got really closes the deal. OnePlus is still king on price-quality.

P.S.: If you are moving from one OP model to other (as was my case), be sure to try the OnePlus Switch app. It has never been so easy to transfer photos, contacts, messages... Even call history!
Read more
13 people found this helpful
Helpful
Report abuse

Reisha Rampaul
4.0 out of 5 stars Works great.
Reviewed in the United States on November 25, 2018
Color: Midnight BlackVerified Purchase
Works fine. No issues. Only thing is they send you the A6000 not the A6003.
Read more
9 people found this helpful
Helpful
Report abuse

afa
1.0 out of 5 stars Wrong Description
Reviewed in the United States on February 1, 2019
Color: Mirror BlackVerified Purchase
The charger does not work and the seller does not respond for the issues i write to their email
Read more
8 people found this helpful
Helpful
Report abuse

Petra
3.0 out of 5 stars Ordered the A6003 and received the A6000
Reviewed in the United States on April 12, 2019
Color: Mirror BlackVerified Purchase
The fingerprint unlock is lightning fast. Very fluid switches between apps and quick responses. However for a phone that I have had for like 4 days, the battery still seems to die a bit quickly compared to my previous phone even with battery saver on. Have been searching online for ways to reduce battery consumption. Outside of that the camera is great and amoled display gives nice sharp looking colours.
However due to misleading description as well as battery, I cannot give this 5 stars
Read more

Kash
4.0 out of 5 stars Great Phone overall
Reviewed in the United States on March 13, 2019
Color: Midnight BlackVerified Purchase
So first thing I'll get out the way is that the charger for this version is the Euro type with rounded prongs, not flat prongs, so you're gonna need an adapter if you're in the western hemisphere.

BATTERY : so the battery life on this is so mugc more impressive than some other smartphones out there. One charge can last me almost TWO DAYS as compared to my last two phones that died in 8-12 hours. Fast charging is also so convenient i can get from 20% to a full charge in the time it takes me to get ready to go out.

CAMERA: The camera is great quality, very crisp and clean and dual focus allows impressive shots for a phone. It may still have room for improvement but it does hold up and stand out among the majority of camera phones right now. The video quality is good but decreases with slow motion capture and in low lighting. This can be improved.

SCREEN/ DISPLAY: the touchscreen is great, it's responsive.. no trouble there. The screen size is great, i was worried it would be a bulky and uncomfortable phone to own but it's actually comfortable to use and the display is crisp and clean with vivid color and a nightmode (warmer light tone) if you need it.

OS: the Oxygen Android OS is basically just the same as android so theres nothing complicated here.

FURTHER ADVICE: i strongly suggest investing in a protective case and tempered glass screen protector. This phone seems like it can last you a while and the less damage you risk the better. I also suggest getting one of those ring shaped holder things you stick on the back to aid holding and supporting the phone and prevent accidental drops while its in your hands... Its still a bit of a larger phone so you wont regret having that either.
Read more
One person found this helpful
Helpful
Report abuse
See all reviews