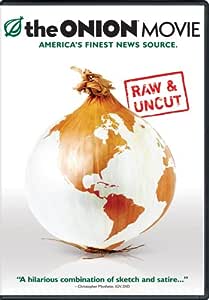 Secure transaction
Your transaction is secure
We work hard to protect your security and privacy. Our payment security system encrypts your information during transmission. We don’t share your credit card details with third-party sellers, and we don’t sell your information to others. Learn more
Details
Ships from
Just 4 Games Inc
Sold by
Just 4 Games Inc
New & Used (44) from
$2.45 + $3.99 shipping

The Onion Movie (Raw and Uncut)

This just in...The Onion invades DVD! Based on the wildly popular newspaper hailed by The New Yorker as â??the funniest publication in the United States,â? The Onion Movie brings you uncensored, uninhibited, UNRATED news and views from around the world. In a stunning development, when Onion News anchorman Norm Archer (Len Cariou) is asked to compromise his journalistic integrity to please a new corporate sponsor, he doesnâ??t just get mad, he gets...angry. Taking aim at pop stars, prisoners, peace talks and, of course, high-testosterone action films, The Onion Movie delivers hard-hitting headlinesâ?"and side-splitting laughs!

Shelved since 2003 then released straight to DVD, the feature-length Onion Movie is based on the satirical nationwide newspaper The Onion, which works better in print than on celluloid. That said, hardcore Onion fans will appreciate this effort to enliven text with filmed comedic sketches that strongly resemble Saturday Night Live news and National Lampoon. Directors Tom Kuntz and Mike Maguire translate what would normally read as sarcastic headlines into slapstick skits starring three news reporters, Norm Archer (Len Cariou), Larissa Laskin (Dana Dobbs), and Scott Klace (Kip Kendall), reporting on idiotic events either live or in the studio. The newsreel opens, for example, with a report from Archer on the dangers of "neck belts" in automobiles, that have lately been decapitating drivers. Spoofs on everyone and everything, from slutty teen stars, racial stereotyping, the handicapped, to military recruitment officials turned peaceful by marijuana, add plenty of characteristically perverse and iffy Onion humor to this odd film. The Onion Movie relies loosely on a plot in which Norm Archer, devoted anchorman, protests a toy penguin interrupting his screen time in the name of advertising an upcoming film, Cockpuncher, that the networks corporate sponsor, Global Tetrahedron, has funded. This facetious action film featuring Steven Seagal, looks a little too life-like after Norm takes measures to fight the power. At an hour and a half, news skits interrupted by fake commercials and Archers fits of rage feel played out, though skit-to-skit, the news broadcasts are quite hilarious, making the film an overall winner if youre in the mood for mockery. --Trinie Dalton

4.5 out of 5 stars
4.5 out of 5
418 global ratings
How are ratings calculated?
To calculate the overall star rating and percentage breakdown by star, we don’t use a simple average. Instead, our system considers things like how recent a review is and if the reviewer bought the item on Amazon. It also analyzes reviews to verify trustworthiness.
Top reviews

Kran Lopez
5.0 out of 5 stars Not for the squeamish! But it's a whole lot of fun!
Reviewed in the United States on June 16, 2019
Verified Purchase
I used this product to shock my friends who thought they knew everything about movies, especially with the gay sex commercials for the "Qween Nathan II" AND the ads for getting your penis unstuck from whatever hole you got it stuck into ...
Read more
4 people found this helpful
Helpful
Report abuse

Albert M. Kapustar
3.0 out of 5 stars alright not great
Reviewed in the United States on April 16, 2020
Verified Purchase
i definitely am no prude but the movie will insult everyone and mistakes insults for geniuine humor.
Read more
One person found this helpful
Helpful
Report abuse

Andrew P
5.0 out of 5 stars Onion humor at it's best
Reviewed in the United States on November 3, 2015
Verified Purchase
Now this is a movie! I bought this movie back in 2010. Every year, once a year, I put this in the DVD player and prepare for a night of laughter. If you like the Onion news website, this movie is for you. It's the website, in video. Dumb, fake news stories galore. Some sketches go on a bit long, but overall this movie is a riot. If you have seen this movie, the cruise ship and taffy sketches are the greatest! As well as the basketball player....

I crack up thinking about some of these sketches. Don't expect high brow humor. This stuff is dumb, but hilarious. Classic Onion comedy, great buy.

K. Collins
4.0 out of 5 stars If Puerto Ricans shooting lasers out of their eyes isn't offensive to you, you might enjoy this
Reviewed in the United States on March 25, 2016
Verified Purchase
This movie is dumb. And for me that's a good thing. Some of the skits are horrible and others remain quotable for quite a while, but it's short and doesn't overstay it's welcome. I'm probably one of the few that actually likes it, though I can see it's flaws. Come in with LOOOOW expectations and you might have a good time.
Read more
Helpful
Report abuse

Trash Panda
1.0 out of 5 stars Segal is in it so you know it’s trash.
Reviewed in the United States on February 12, 2021
Verified Purchase
Just a movie that makes you feel like you’re watching the news for 2 hours.
Read more
Helpful
Report abuse

Mksurfin7Top Contributor: Cycling
5.0 out of 5 stars Why isn't this more popular? Amazing sketches and vignettes.
Reviewed in the United States on September 3, 2014
Verified Purchase
This movie is hilarious. Great vignettes that occasionally run together, kind of in the style of Kentucky Fried Movie or something like Mr. Show. I have no idea why this isn't more popular - maybe because it doesn't necessarily have the same tone/style as the onion - but it is so good. I make people watch this and I think every one has loved it and been shocked that they hadn't heard of it.
Read more
Helpful
Report abuse

Wur wur
5.0 out of 5 stars The region!!!
Reviewed in the United Kingdom on August 18, 2018
Verified Purchase
Had no idea whatvregion 2 meant... turns out my dvd player doesnt playbthe disc:(
Read more
Report abuse

From the Musician's Pen
5.0 out of 5 stars Cutting Humour That Will Make You Laugh Out Loud
Reviewed in Canada on November 15, 2014
Verified Purchase
It's a very funny movie. It's satire and it makes fun of everything. I think it will occasionally "cross the line" and "go too far" for some people though.

It's mainly a bunch of skits tied around a loose and central plot. A news station with an older and more respectable staff has been sold to a new company run by a younger generation that aim to make the news more fun and entertaining. The main news reporter is trying to maintain some level of respectability as his job and world fall apart around him.

If you like the old Saturday Night Live, SCTV, etc. you'll surely like this. I bought a copy because I'll be re-watching it.

PS - There is also an Onion website and newspaper and several books.

I. Hart
1.0 out of 5 stars It should be for (pre) teen kids of all ages.
Reviewed in the United Kingdom on February 8, 2009
Verified Purchase
I bought this because of the trailer. However trailers are designed to make the movie look at its best or better.
In this case it was the latter.
Total crass in extremis.
Read more
One person found this helpful
Report abuse

Page 1 of 1 Start overPage 1 of 1
Previous page
Next page
Pages with related products. See and discover other items: widescreen movies