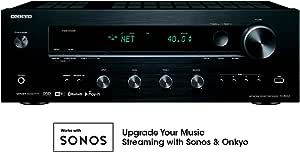 by Onkyo
4.1 out of 5 stars 45 ratings
| 58 answered questions
Currently unavailable.
We don't know when or if this item will be back in stock.

Classic stereo amplification is rejuvenated with network functions that simplify audio streaming from personal devices, while adding convenient ways to cast music around the home. The TX-8260 has Chromecast built-in, FireConnect, and DTS Play-Fi multi-room technologies over 5 GHz/2.4 GHz Wi-Fi for stable connection. You can play from Spotify, TIDAL, Pandora, TuneIn, and Deezer services, cast from iTunes and other apps with AirPlay, or stream with Bluetooth technology.

4.1 out of 5 stars
4.1 out of 5
45 customer ratings
How does Amazon calculate star ratings?
Amazon calculates a product’s star ratings based on a machine learned model instead of a raw data average. The model takes into account factors including the age of a rating, whether the ratings are from verified purchasers, and factors that establish reviewer trustworthiness.
Top Reviews

Mio
1.0 out of 5 stars Network connectivity died in less than 6 months, terrible customer service
Reviewed in the United States on February 20, 2019
Verified Purchase
I bought this to replace a 18 year old Onkyo receiver I had that finally failed me after user-error--I inadvertently let the speaker wires contact one another and it caused a transformer short in the unit.

Bought in September 2018 and February 2019 the network connectivity now goes into a forever bootloop saying 'now initializing'. Customer service which was terribly unhelpful said it needed to be serviced, and I should send it to their warranty repair department. At my expense. So I'm expected to spend upwards of $30+insurance to ship something I paid $350 for less than a year earlier. Completely unacceptable.

Fortunately through my own prodding, because I actually laughed when the warranty support told me this, there is a local place I was able to take it to. It now awaits a 3 week backlog for them to 'fix' it, and more time if they have to order parts.

Avoid Onkyo. The sound was good, but the internet connectivity and bluetooth was never that great, very buggy, and it got worse over time. The software is not mature. Stick with making stereos and skip the gizmos. I would have rather paid $200 for a great Onkyo unit without those features frankly.

murphtron
5.0 out of 5 stars Great blend of old and new skool
Reviewed in the United States on November 14, 2018
Verified Purchase
This replaced an Onkyo receiver from the early 2000s. I like this product because it's a traditional 2-channel (2 sets of wired stereo speakers) receiver with FM/AM tuner. You can connect phono & CD player to it. I have a very simple setup. CD Player, 2 sets of stereo speakers. That's it. What I wanted was the ability to also stream directly to the receiver without having to plug in my phone. This receiver does an excellent job. Spotify Connect is fantastic. My phone acts as the remote, but the music streams directly to the receiver. Great! It also supports Airplay, Pandora, Sonos Connect, and a host of other streaming services. Also has Chromecast built-in for my Android friends. It seems very future proof. Setup guide was straightforward. The hardest part is connecting to a wireless network and typing in a password. But if you have an iOS device the setup is automatic. Nice! The firmware update process worked flawlessly over wifi (I had to update twice OOTB, to get current, but no problem). Wifi performance improved dramatically after the firmware updates.

My only complaint is the Speaker A/B toggle is a single switch that cycles thru A, B, A&B. My old Onkyo has two toggles, one for each set of Speakers A and B. Since my speakers are indoor and outdoor, this means sometimes I must cycle from B to A&B, and then to A. This is a minor inconvenience, but kinda dumb. I can live with it. I have not used Firecast, so cannot comment on other negative reviews of that service/protocol. For my needs this device is almost perfect.
Read more
8 people found this helpful
Helpful
Comment Report abuse

Murray
4.0 out of 5 stars Mostly delighted / Minor annoyances regarding the interface ONKYO 8620
Reviewed in the United States on June 12, 2019
Verified Purchase
- Overall:
I wanted a high-quality, reliable receiver, modest-power amp and I'm happy with this unit.

The thing I most wanted were separate buttons for separate stations: on most of the reliable, high rated receivers the presets are accessed via a dial or up-up-up-up-up selection. What a nuisance if you're searching for a program on the 10th preset. I give credit to this unit, at least, which has 4 buttons on the front panel for your presets, over-air stations or internet radio, which I love. (More later on how presets are stored.)

- Panel labels: Others have commented the labels are hard to see, and I concur. Gray lettering on black looks hi-tech from afar, but the mid-life eyes will find the small font size and low contrast illegible in anything but the brightest light. You don't need to use them much after you've programmed, but while you're setting this up, I needed a flashlight every time. Ugh.

- Volume control: At first I thought the volume was too-fine grained. Who wants half-db (!!) adjustments, which are truly inaudible? To make a significant adjustment, I had to turn the dial multiple full rotations. Only by accident did I later discover the dial is speed sensitive. Turn fast, and you make big adjustments. Turn slowly, fine adjustments. Wonderful idea! But it's not mentioned in the manual anywhere, and I hadn't seen that mentioned in other comments. (Maybe it's common these days to have this?)

- Bass/Treble/Balance: Maximum adjustment is +/- 10 db. For some material, I want more. And when I'm testing speaker connections, I def'ly want the balance to go all-the-way to the right or left.

- A/B: Others have noted this unit uses only one button to select A/B/AB speaker sets. My prior [Denon] had 2 buttons to independently control speakers, which is nicer - for instance: this unit does have separate Zone 2 On and Off buttons - but I don't find the single button sequencing thru the speaker A/B options that annoying. You mileage may vary.

- Network:
Took a while to figure out the interface to connect to my Pandora account, but it works well. Listened for hours, no problem. Powering up another day, and after initializing and connecting to wifi, it starts right up.

Re: Other commenters noting network issues: Onkyo's site now shows a Special Support Program - some of their units had a defective chip causing loss of network connectivity. They're replacing defective units via a trade in program thru Mar 31 2020. Click on Contact Support to register for the program.

- Panel presets: There's a small bug here. After selecting station presets, there's a way to clear them. [Press memory+tuning mode together: it's labeled as clear] But if you want your presets in a specific order, there's a bug where presets don't get fully cleared. If you assign a bunch of stations to presets, then set the front-panel button (BGM) buttons [good luck finding out what BGM means], and *later* reassign stations - clearing some of your first presets - the front-panel buttons will continue to show the *original* preset numbers.

(Gonna describe here in case an ONKYO sw engineer ends up reading this.) Somehow, I set the same station to preset 1 and later as 37. (Dunno why sw doesn't recognize it's the same freq.) I set the front-panel button to that station and it shows the label 37. (Why not label 1, which I wanted?) I hit clear to remove the 37 preset. Reset BGM button. Shows 37. There is no 37 at this point. (BGM buttons can be reassigned at any time, so I'm not misusing this.) OK, I really wanted the first station to show up with label 1, so I did a system restore. I re-enter everything. But lo! The BGM button still shows the label of 37, so even a full restore doesn't clear all info. Strange. I'll live with the 37 and 38 when the numbers should be 1 and 2, I'm not that anal :)

So, overall, 4.5 stars, with just a little annoyance at the interface and display. Nobody and no thing is perfect.
Read more
6 people found this helpful
Helpful
Comment Report abuse

lardog14
4.0 out of 5 stars Good sound and most features useful
Reviewed in the United States on April 3, 2019
Verified Purchase
In general Onkyo 8260 has very good sound and definitely the best for streaming options.
Pro: sound, features, flexibility in use, streaming options
-any source/app streaming, receiver displays song/artist

Con: chromecast built-in...very unreliable and inconsistent compared to other brands that offer feature...way behind on chromecast firmware versions at any given time. After period of receiver being in standby, often requires receiver reset process to restore this functionality.
-No bass management for sub out
-poor tech support, their offical user forum not responsive
-feature firmware updates limited to select products, even for product same year release.

I like Onkyo but if Denon had a stereo receiver would buy that...just feel more in touch with their product and customers.
Read more
6 people found this helpful
Helpful
Comment Report abuse
See all reviews from the United States

Paul Reeves
5.0 out of 5 stars Outstanding
Reviewed in Canada on December 4, 2018
Verified Purchase
This unit does everything except make my morning coffee. Full capability well beyond what I need; excellent sound results, smart programming & functionality make it easy to set up and use. An excellent unit.
Read more
Helpful
Sending feedback...
Thank you for your feedback.
Sorry, we failed to record your vote. Please try again
Report abuse