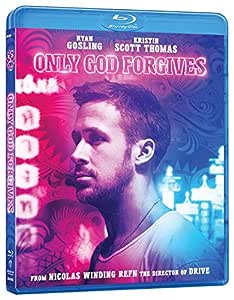 Julian (Ryan Gosling), an American fugitive from justice, runs a boxing club in Bangkok as a front for his drug business. His mother (Kristin Scott Thomas), the head of a vast criminal organization, arrives from the US to collect the body of her favorite son, Billy. Julian’s brother has just been killed after having savagely murdered a young prostitute. Crazy with rage and thirsty for vengeance she demands the heads of the murderers from Julian. But first, Julian must confront Chang (Vithaya Pansringarm), a mysterious retired policeman - and figurehead of a divine justice - who has resolved to scourge the corrupt underworld of brothels and fight clubs.

3.5 out of 5 stars
3.5 out of 5
1,593 global ratings
How are ratings calculated?
To calculate the overall star rating and percentage breakdown by star, we don’t use a simple average. Instead, our system considers things like how recent a review is and if the reviewer bought the item on Amazon. It also analyzes reviews to verify trustworthiness.

RADFLIKINC.
4.0 out of 5 stars Hyper violent, exaggerated reality, revenge film?
Reviewed in the United States on August 6, 2018
Verified Purchase
This one is certainly gonna divide people that watch it. This is the type of film that will split a room in half and inspire ranting arguments for both sides. Look, you gotta know there are films and filmmakers that don't take the usual approach or use cookie cutter techniques. And Refn is certainly from that different plain. Sometimes brilliant and usually odd. Not in a bad way. This film has all the makings of a seedy crime underbelly tale, but it's not. It has all the makings of your standard revenge tale, but it's not that either. Refn decides to instead, leave a whole lot up for interpretation here. Even not clearly painting who we should root for, sympathise with or label a true villian. *SOME SPOILERS NOW* It's just a bunch of seemingly horrible people that lock into a back and forth bloodbath with gore to spare. We all know and mostly like Gosling, and usually expect to cheer for him, but although you never really see it, we're told he's a terrible dangerous person. He seems to show the presence of some morals however. Then you have the deranged police chief that goes around dealing out his form of "justice" with his stylish short sword. The landscape and cinematography are at times, stunning. And between the seldom interaction or even presence of extras and the hyper realistic violence and imagery, the movie plays with a sort of dream-like quality. Or nightmare (depending on how you feel about graphic murder). For that very reason, i had fun with this film. This one is more for those who have an understanding of the process. As soon as you're lulled comfortably into the picture, Refn brilliantly jolts us with bursts of shocking violence. One of the staples of his style. Put the kiddies to bed for this one. It is unapologetically brutal. Do not put this on hoping for a blasé crime picture. You must at least appreciate Refn's gorgeously wicked style to enjoy ONLY GOD FORGIVES.
Read more
14 people found this helpful
Helpful
Report abuse

Kerenor
5.0 out of 5 stars Very deep and dark and sexy and bloody and fun 🔥🔥🔥
Reviewed in the United States on March 12, 2018
Verified Purchase
Love this movie. It is very dark and sultry and bloody and sexy. Ryan Gosling is amazing as usual but the rest of the cast is great as well. Director let his imagination run wild and it does look like he purges his darkest fears and desires but for people who love deep psychological movies it will be interesting to watch, the colors and visuals are amazing and vibrant. The music is very " Neon " like. I enjoyed it tremendously and watched it a couple of times. It's kind of like dark chocolate, not for everyone but very pleasing for some.
Read more
8 people found this helpful
Helpful
Report abuse

The Wanderer of Akron
4.0 out of 5 stars It's hard to watch, but if you understand it, it's brilliant
Reviewed in the United States on September 20, 2019
Verified Purchase
This movie starts off incredibly racy asking you to sympathize with admittedly terrible people. Except it isn't. It doesn't follow a traditional hero archetype. You have to witness a lot of awful things in this movie, and I hated certain characters. This movie is most certainly not for everyone. It's violent, it's very very dark and you need a strong stomach to sit through some scenes. Ryan Gosling was excellent in this role as a tortured criminal who really doesn't enjoy the life he's living. There's obvious David Lynch inspiration here. If you can stomach it and see it for what it is rather than what you believe it will be, you may appreciate this film as I did. Also, beautiful set design, soundtrack, and cinematography.
Read more
4 people found this helpful
Helpful
Report abuse

BK CinTop Contributor: Batman
3.0 out of 5 stars I really wanted to like it
Reviewed in the United States on August 24, 2019
Verified Purchase
This movie has gotten very controversial reviews for different reasons. Some love it, most seem to hate it, and it's debatable on if it's a movie so deep that people don't get... or if it's just so basic that people are trying to read way too much into it.

I was hoping for the best and wanted to love it. 10 minutes in, I wasn't digging it. The next 20 minutes were better but then it got weird again. This continued throughout the film and with so many different cuts (from real life to imagination?) it's not really clear whats going on. There were some definite "wow" moments when you find out more details.. but after watching it, trying to understand it, and then reading other explanations of it.. It just felt like it was trying too hard to be edgy and cool and stylish.. and very much a "David Lynch" movie.

I wanted to like it, and I did like parts of it... but in the end, it just didn't pull it off like I wish it had been able to.

Saul Goodman
4.0 out of 5 stars From the director of Drive, Only God Forgives is anything but.
Reviewed in the United States on June 23, 2016
Verified Purchase
This seems to be a very polarizing film, it seems that most people dislike it, but that might be because they aren't aware of what they're getting themselves into. The movie is an at time very dry and slow paced story about the loss of innocence, the misdeeds one makes and the consequences that follow. Every action made by the characters has some kind of consequence and most are given a chance at some kind of (for lack of a better word) redemption. It is a very stylized film, beautifully shot and has some very strong performances, but is not for those who want things directly explained to them. As I said the before, the movie is very subtle with it's presentation and does a lot of the storytelling through visuals, which (again) can be a very polarizing experience.

If you're going in expecting to see another Drive, then you are going to have a very bad time, this is a completely different kind of movie and isn't anywhere as near as accessibly. But if you enjoy movies that are very stylized, go at their own pace and tell some of the story through what some may consider unconventional means, then give this movie a shot.
Read more
13 people found this helpful
Helpful
Report abuse
See all reviews

UKNorthWestGuy
2.0 out of 5 stars I wouldn't bother
Reviewed in the United Kingdom on August 11, 2019
Verified Purchase
I really enjoyed the movie 'Drive' - therefore I had high hopes for this film.

Unfortunately, it doesn't work. Ryan Gosling's tried and tested formula of saying little and staring into space reacting to events around him, quickly becomes tiresome and ultimately contributes to what becomes an irritating movie.

The script is off, disjointed and in place unconvincing. Whilst the set designs are well done, the overall sense if that there is too much style at the expense of everything else. Kristen Thomas' lines and character aren't convincing and it's not clear what the themes are here, never mind what the movie has to say.

Overall I found this quite a frustrating movie to watch, as if the director had some half baked ideas that weren't fully realised.
Read more
8 people found this helpful
Report abuse

Derek Stocker
2.0 out of 5 stars Not for me.
Reviewed in the United Kingdom on September 28, 2019
Verified Purchase
I have seen Ryan Gosling in a LOT better films.
This was an 18 rated and has violence BUT the rest is just staring, creeping about and would probably classed as a genre or film noir, found it boring but stuck with it, now regretted.
Read more
6 people found this helpful
Report abuse

Brendan Ray Cyrus
1.0 out of 5 stars Cinematic flatulence
Reviewed in the United Kingdom on April 19, 2018
Verified Purchase
Nicholas Winding Refn wrote and directed some great films. The Pusher Triology was highly entertaining. Bronson was enjoyable (Tom Hardy) and Drive was a masterpiece. 'Only God Forgives' is cinematic flatulence.
Currently on this website it has 47% one stars reviews, and 23% five star reviews.
Read more
6 people found this helpful
Report abuse

Vincent Gibbon
4.0 out of 5 stars Visual treat
Reviewed in the United Kingdom on April 18, 2020
Verified Purchase
but a bit on the arty side for me.. Slow in other words.. But entertaining if you enjoy the technical side of films as it`s beautifully crafted.
Read more
One person found this helpful
Report abuse

Amazon Customer
3.0 out of 5 stars Hard work.
Reviewed in the United Kingdom on April 26, 2019
Verified Purchase
Not an easy viewing.
Read more
One person found this helpful
Report abuse
See all reviews

Page 1 of 1 Start overPage 1 of 1
Previous page
Next page
Pages with related products. See and discover other items: the weinstein company