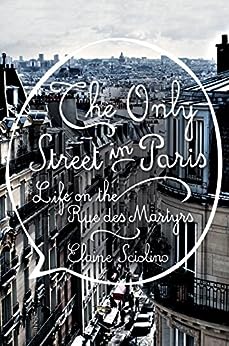 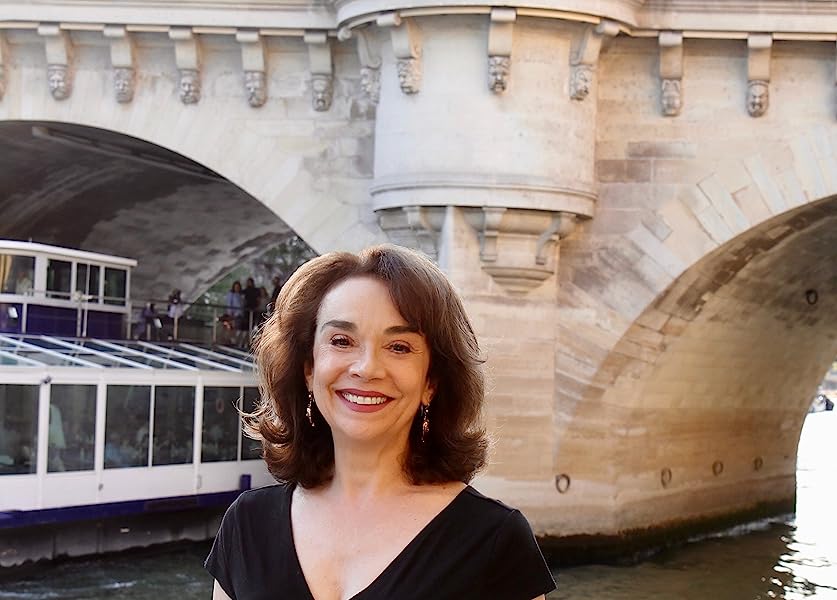 The Only Street in Paris: Life on the Rue des Martyrs Kindle Edition

"The atmosphere on rue des Martyrs is refreshing and enticing in our modern world." ---Library Journal Starred Review --This text refers to an out of print or unavailable edition of this title.

Elaine Sciolino is a writer for the New York Times in Paris and the author of La Seduction, Persian Mirrors, and The Outlaw State. In 2010, she was decorated as a chevalier of the Legion of Honor for her special contribution to the friendship between France and the United States. --This text refers to an out of print or unavailable edition of this title.

4.5 out of 5 stars
4.5 out of 5
346 global ratings
How are ratings calculated?
To calculate the overall star rating and percentage breakdown by star, we don’t use a simple average. Instead, our system considers things like how recent a review is and if the reviewer bought the item on Amazon. It also analyzes reviews to verify trustworthiness.
Top reviews

Kindle Customer
VINE VOICE
5.0 out of 5 stars I've Seen a St Denis Statue with a Halo!
Reviewed in the United States on October 31, 2019
Verified Purchase
Having read the forthcoming The Seine by Sciolino and loving it, it was natural to follow up with an earlier book she wrote about life in Paris. Not surprisingly, loved this one, too. Having grown up in Manhattan when the neighborhoods still existed and little stores were on every street and avenue and the customers knew the owners and a real relationship existed between the two, it was easy to relate to this book. By the time one finishes reading it, one knows which store to buy the freshest produce, the best cheese, the finest wine, the newspaper, the morning coffee and croissant and where to go for books, music and entertainment. In addition, the history of the street and its buildings and its decrepit Church are as familiar as though you, too, lived on the Rue des Martyrs. I'd love to visit and see it for myself.
Read more
10 people found this helpful
Helpful
Report abuse

ulysses4
5.0 out of 5 stars Still, A Moveable Feast
Reviewed in the United States on August 11, 2018
Verified Purchase
Perhaps, it is a precondition that you love Paris. If you do, this is a passionate and entertaining tour of and tribute to one small segment of this inimitable city. There are many, many books about living in Paris, and I have quite a few of them. Each neighborhood has its devotees, and for some, detractors. Beyond the cursory rambles of tourists, and the often tedious drone of formulaic guide books, those who go native, or more likely half-native, have the chance to paint a picture of daily life and how they fit in or don't in the social fabric. This is an earnest and charming portrait of every day people on and near a street steeped in history and still a quite lively and colorful venue. Ms Sciolino not only records the life of this community but becomes a full fledged member.
Read more
7 people found this helpful
Helpful
Report abuse

Escondido
5.0 out of 5 stars An charming history of a storied street.
Reviewed in the United States on February 20, 2016
Verified Purchase
Journalist Elaine Sciolino takes us on a most enjoyable tour of a storied Paris street, the Rue des Martyrs. Life there has evolved through the centuries and so many events that occurred there are now part of a history known to all. Degas, Zola, Truffaut, all left their mark. We walk the street craning our necks at the architecture while learning its history from local mavens. We are introduced to many of the local shop keepers, their charms and their quirks. Ms. Sciolino's writing is brilliantly descriptive, a pleasure to read. Those who already know Paris well should now be as eager to explore this neighborhood as new visitors to the city might be. And if travel to Paris isn't possible, well, this lovely book is the next best thing.
Read more
23 people found this helpful
Helpful
Report abuse

Charles Dillingham
5.0 out of 5 stars A wonderful book
Reviewed in the United States on July 21, 2017
Verified Purchase
First of all Elaine is an extraordinary person, having served as correspondent and bureau chief all over Europe and the Middle East. So when you read this book, you are living with Elaine on her very personal journey of discovery, not an objective dictum entirely. For anyone who has spent any time wandering the streets of Paris, and longs for more, this is the book. Read it, and book your trip.
Read more
11 people found this helpful
Helpful
Report abuse

Tiara
5.0 out of 5 stars Authentic Parisian Culture: Daily Life Shops And Their Owners Stories
Reviewed in the United States on July 28, 2017
Verified Purchase
I absolutely loved this book-- so much that I read it twice. The skilled writer authentically takes the reader in and out of shops and stores that fill the needs of Parisians' daily life. Markets, cafes, clothing consignments are expected. But what about the unusual? A knife sharpener, gilt and barometer restoration, burlesque entertainment, book giveaway block parties. It's as if i walked in and out of these shops, but more, I know something about the lives of the owners and ties to history. If you want to visit one street in Paris, buy this book. It will add to your life experience through the crafted stories of people's authentic daily lives as well as the cultural history of Parisian society. Give this book to someone visiting Paris for the first time.
Read more
15 people found this helpful
Helpful
Report abuse

James Weaver
5.0 out of 5 stars Really enjoyed this book.
Reviewed in the United States on January 6, 2021
Verified Purchase
Have been in that area for an afternoon and now would spend a day walking up and back. Something like the Rue Cler in Paris where I have stayed and am planning to go again. Everything you need a small area that is great for travelers. Laundromat, Post Office, Metro, restaurants, dry cleaners, barbers and hairdressers, florist, clothing stores, several markets,. All within a 15 minute walk from the hotel.
Read more
One person found this helpful
Helpful
Report abuse

SouthPaw
5.0 out of 5 stars A fun and interesting look at a street in Paris
Reviewed in the United States on September 26, 2018
Verified Purchase
I’ve already been to Paris ... saw the touristy sites and the not so touristy sites. I also walked down the Rue des Martyrs, however, it was just a street to get from point A to point B. I did have lunch at Smileys, though, which was mentioned in the book. But not knowing the history of this street I just walked by the shops not realizing there are interesting people who work there. Rue des Martyrs is now on my list of go to places on my next visit to Paris. I bet there are many streets that have an interesting history in Paris ... this is just one of them.
Read more
One person found this helpful
Helpful
Report abuse
See all reviews

Craobh Rua
4.0 out of 5 stars The Life and Times
Reviewed in the United Kingdom on October 20, 2019
Verified Purchase
Elaine Sciolino was born in Buffalo, New York. She began her journalism career as a researcher at Newsweek Magazine before joining The New York Times in 1984. There, she held a number of posts and eventually became Paris Bureau Chief - she's been based in the city since 2002. In 2010, she became a Chevalier of the Legion of Honour, France's highest state honour.

When Sciolino first came to Paris, she lived on the Rue de Bac, a very well-to-do street in the seventh. (If you've ever read "The Elegance of the Hedgehog," Rue de Grenelle - the street on which that book is set - shares a corner with the Rue de Bac). In time, her children grew up and moved out and she and her husband decided to downsize. Sciolino was very keen to move to the Rue des Martyrs, a street they had discovered shortly after they first moved to Paris. They finally found an apartment on the Rue Notre Dame de Lorette - technically, not the street she wanted, but her new home was only a matter of steps from her heart's desire. Through what she terms herself as "random acts of meddling", she came to know the street's inhabitants and shopkeepers, while she studied her new home's past in great detail. With this book, she shares the stories of the people she has come to know and the street she loves.

An affectionate and easily read book and the sections that were about the street's history were certainly informative. The book, however, is more about the street's people...though I can't help wondering how they felt about appearing in it.
Read more
One person found this helpful
Report abuse

J. Collins
5.0 out of 5 stars "America is my country and Paris is my hometown"
Reviewed in the United Kingdom on December 5, 2015
Verified Purchase
I loved this engaging book !!!!
It doesn't take much for me to pack a bag, buy a Eurostar ticket and plan a long weekend in Paris.
I've been on this street a few years back without knowing the incredible history and life stories behind all
the shop fronts. A good excuse to go back there very soon !!!
I want Elaine Sciolino at my next dinner party. I'm totally jealous of her Parisian life on the Rue des Martyrs.
Read more
3 people found this helpful
Report abuse

Autodidact
5.0 out of 5 stars Paris
Reviewed in the United Kingdom on September 25, 2019
Verified Purchase
Absolutely loved this, not passing this to aCharity shop, this is a re-reader
Read more
One person found this helpful
Report abuse

Stuart Elms
5.0 out of 5 stars Thoroughly Recommended
Reviewed in the United Kingdom on August 30, 2017
Verified Purchase
A truly fantastic read for anybody interested in travel, art, literature, food or religion. A unique perspective from a US ex-pat on a really fascinating street in the heart of Paris.
Read more
Report abuse

Windsor
4.0 out of 5 stars A good book for getting to know rue des martys
Reviewed in the United Kingdom on April 2, 2018
Verified Purchase
I read this book and took notes, then revisited rue des martyrs for old times sake.
Read more
Report abuse
See all reviews