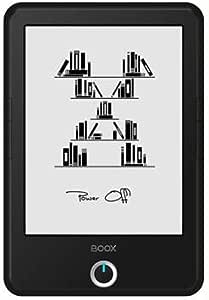 Brand: Onyx Boox
2.9 out of 5 stars 52 ratings
| 14 answered questions
Currently unavailable.
We don't know when or if this item will be back in stock.

LYNX is the right choice for heavy readers. It allows users to install apps from Google Play Store. Customers can access content from different stores e.g: Amazon Kindle, Google Play Books, Google Play Newsstand, ComiXology; “Save for later” apps e.g Pocket, Evernote; RSS apps e.g: Feedly and more. With Google Play Books or Amazon Kindle apps you choose from millions of books*. Read online and offline, bookmark pages, highlight text, and add notes. You are always in sync on any device. The new E Ink 6.8-inch ULTRA HD display with highest resolution yet (1440x1080) makes text and images look sharper than ever before. LYNX has Bluetooth 4.0 LE which enables you connect your wireless speaker and listen to e-books with IVONA Text-To-Speech. With Google Play Newsstand & Feedly* you can browse a wide selection of titles from cooking to cars, travel, style, sports and more. Add RSS feeds from blogs or news sites you like and enjoy them on a e-paper display. Create documents online and offline on LYNX with Google Docs or Kingsoft Office. Upload your files to Google Drive and access them on your e-reader*. Connect your wireless Bluetooth keyboard and edit with ease. IVONA a world-class text-to-speech system reads texts like humans. You get 3 out of the box voices - English, German and Polish. LYNX has a built-in light which enables reading books in complete darkness without intensive energy consumption and eyestrain. * Third-party applications may require additional actions e.g registering an account. Some functions may be limited for some regions. Third-party apps are supported by their developers, not Onyx. ** Based on 30 minutes of reading per day, with wireless off, front light on (LYNX: up to 18 000 page turns). Actual battery life may vary and depends on usage and other factors. Company names and or product names mentioned herein are the property of their respective owners and may be trademarks or registered trademarks.

2.9 out of 5 stars
2.9 out of 5
52 global ratings
How are ratings calculated?
To calculate the overall star rating and percentage breakdown by star, we don’t use a simple average. Instead, our system considers things like how recent a review is and if the reviewer bought the item on Amazon. It also analyzes reviews to verify trustworthiness.
Top reviews

Dorit
1.0 out of 5 stars Unbelievable!
Reviewed in the United States on February 28, 2015
Verified Purchase
The concept was beautiful, the ideas were great - but the execution... I was prepared to overlook the long, long start-up time. I didn't like the pale fonts, but I thought I could figure out a way to live with that. I even thought that I might overlook the fact that it froze up on me a few times (on the first day I had it), with the only way to make it respond being: to turn it off completely and then turn it on again.
But a two hundred dollar device with a touch screen that can't figure out where I touched it?!? Seriously? That would be unacceptable in a one hundred dollar device! What good is the built-in browser, and all the other sweet goodies - if you can't use them, because the touch screen can't get its act together? (For that matter - what good are they with fonts so pale you can't see what you're doing?)
I might have expected that quality of touch screen in a twenty dollar device, but not something that costs ten times as much - this device is on its way back to where it came from.

downeaster59
5.0 out of 5 stars A very good Android-powered E-Ink eReader
Reviewed in the United States on June 29, 2014
Verified Purchase
I've been looking for an E-Ink device that would allow me to read not only eBooks but also books and other text on apps that are basically for reading. The options have been rather limited to eReaders tied to one specific source or running a very old (relatively speaking) version of Android.

It runs Android 4.04 (Ice Cream Sandwich) - not brand new, but supported by nearly all Android apps. It has Play Store, so it's easy to find and install what you want. With an E-Ink device, one needs to be aware of certain things. It's not designed for videos or games. It's sole purpose is text, though it can do a decent job on some graphics. Also, be aware that reading apps designed for "conventional" tablets won't work as well on E-Ink. You'll get that moment of jumbled text as you turn a page or scroll, because the apps aren't optimized for E-Ink. If you keep this in mind, your expectations will be realistic.

1) High resolution 6.8 in screen, as good as Kobo Aura HD
2) Ability to install apps from Google Play Store
3) Text-to-speech (through headphones or Bluetooth - no speakers)
4) Four eReader apps pre-installed
5) Light is fine and even, and can be adjusted or turned off.
6) Four eReader apps pre-installed
7) Ideal for some apps, like Logos Bible Software, Instapaper or Pocket
8) Relatively light and thin - thinner than Kobo Aura HD or Kindle Paperwhite
9) Some physical buttons, for you Nook Simple Touch fans - though you can use the touchscreen exclusively!
10) Bluetooth keyboard supported

1) Apps can't access external SD card, though the T68 can read eBooks from an external SD. Apps save to internal SD card.
2) few instructions - therefore, a learning curve. It takes some time to learn how to optimize your fonts and display quality.
3) Pre-installed eReader apps have limited settings and a few rough edges; install Moon Reader Pro!
4) More expensive than most eReaders
5) A little less "eye candy" than other eReaders; just a bit rougher around the edges

Who is the Onyx Boox T68 for? It's for the person who does a lot of reading on a device - not only eBooks but other text-intensive apps - but who finds conventional tablet displays tiring for the eyes. If you want to read only eBooks, there are less expensive options. If you want other reading apps on E-Ink, the Onyx Boox T68 can serve you well. I would have given it 4.5 stars, but that wasn't an option. Four seemed too low - therefore, five. It serves my needs admirably.

Edit (9/14/2014): this review was written not long after I purchased my first T68. Houston, we have had problems in the meantime. My T68 began to bootloop at random, until it became very frustrating, if not impossible to use it for more than ten minutes at a time. I returned it to Amazon. As Amazon had no more T68's at the time, I ordered a second one direct from Arta Tech in Poland. That one wouldn't even boot up at first. When it finally did, it, too, developed the bootloop problem. I had to return it to Poland, and I had to pay shipping. Very costly. Then, I ordered a third one (yes, third) from Amazon. This one works correctly. So, be aware that there are some quality control issues before you choose to buy.

Ballpark
1.0 out of 5 stars I Wish I didn't buy this
Reviewed in the United States on July 28, 2014
Verified Purchase
Update 11/4/14
I lowered my rating to 1. I just installed the firmware update last night, and now the Play Store isn't working. Perhaps this is no longer an open android ereader as it was before. If so, then it's worth very little to me. Also it can't be used without it being plugged in because of the boot loop issue. Piece of junk! I regret spending $200 for it. I might spend $25 at the most.

Update 9/27/14
I lowered my rating to 3. I'm experiencing similar problems as the other Amazon reviewers. It's still working for me, but the battery life is short, and once it gets below 85% battery life, it will start the boot loop. I have to keep it well charged. I've had it for 3 months and I'm hoping that it won't die.

Original review:
This is exactly what I was looking for! I am invested in books that were bought on Logos Bible Software. I was looking for a device that I could read Logos books for extended periods of time. As far as I could find this is the only epaper (eink) ereader on an open Android platform where one can run any app that is available on an Android device through Google's Play Store. That means that all reading apps that are available for Android are available on the T68. Some work better than others as most of them are built for a typical LCD tablet.

Remember folks that the T68 is an epaper ereader and not an LCD tablet. The reason I say that is that it seems that people are trying to use this device like it's a typical tablet. This device is meant for people to read books on. I'm certain that there can and should be some improvement in the usability of it's touch-screen and buttons, but I have found it to be very usable for Logos and Kindle book reading, and potentially any other reader app that can be installed with Google Play. This device is one of the first of it's kind, and I have found it worth my money to read my ebooks considering I have no epaper alternatives for Logos books.

I'm surprised when I read reviews that say it's slow. Either these people are reading one page per second and can't wait for the turn or they're trying to play a flight simulator or crushin' some candy.

Mark Shapiro
2.0 out of 5 stars Two Stars
Reviewed in the United States on January 16, 2015
Verified Purchase
Unfortunately had to return the reader due to very slow reading from the SD card.
Read more
Helpful
Comment Report abuse