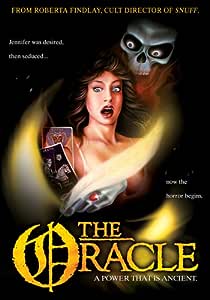 JENNIFER CAN SEE THE FUTURE! Moving into an apartment once occupied by an old gypsy medium, Jennifer and her husband discover an oracle, an automatic writing device used to communicate with the dead. It doesn't take long before Jennifer is contacted by the ghost of a murdered man who wants her help in seeking revenge on his killers as well as his wife's lover and a psychotic transvestite lesbian assassin. Battling possession as the tormented spirit terrorizes and manipulates her, Jenny finds herself directly in the path of a dark and violent force. From cult director Roberta Findlay (TENEMENT, BLOOD SISTERS). Special features include director interview and audio commentary, trailer, tv spot and photo gallery.

Roberta Findlay was a pioneer female independent filmmaker. She is a cinematographer and director, known for Blood Sisters (1987), Prime Evil (1988) and The Altar of Lust (1971). She was married to the late filmmaker Michael Findlay.

John's Horror Corner
2.0 out of 5 stars The boring Ouija-esque Christmas horror crime thriller you should be glad you never heard of.
April 1, 2019
Format: DVDVerified Purchase
This film is really trying to be good. So I feel badly saying it’s really, really, really boring and best left forgotten in an old dusty box of VHS in the basement. Only recommended for bad (really bad) B-movie night viewing.

During her Christmas party, Jennifer (Caroline Capers Powers; who only ever acted in this one film) entertains her guests with a planchette to contact spirits like a Pictionary-Ouija board. After the game gets a bit awkward, the planchette communicates with Jennifer alone and, well, eventually slimy little squid monsters emerge from the planchette box. So now you think this is a weird little tentacled demon movie, right…? Wrong. We take a hard right into crime thriller territory with a psychic-medium angle and there is nothing good about it! Boy does it get dumb! But God help the filmmakers—I felt like they were really trying to make something good.

Emerging in the horror genre after a career in the adult film industry, director Roberta Findlay (Prime Evil, Lurkers, Blood Sisters) has generated typical B-movie fodder—although not really the kind I’d recommend. From its opening scenes it feels no different from any other one-(watch)-and-done throwaway horror flick from the 80s. Not as bad as Dark Tower (1987) or Things (1989), but definitely not as good as House (1986) either. And while it may transcend B-moviedom in its lack of utter silliness, it’s still silly in its lack of quality despite its best efforts. Green hazy light indicates magic and supernatural occurrences, low budget gags have objects moving on their own, flicking lights on and off or knocking over some books indicates an evil presence—these are weak cues and weakly executed.

Christmas music and holiday themes decorate this cheap quirky film and I’m left wondering why since none of the story or concepts actually relate to Christmas—unless this is a far reach analogous to the “Murdered Ghost of Christmas Past.” But in the third act this theme is completely absent, and that certainly says something about the filmmaking.

The blood and gore start out so weak you’d want to stop the film, but it does amp up to grosser and sillier levels that should conjure a few giggles. Especially the “self-murder” scene and the evil diminutive cephalopod-like creatures—just plain B-movie delight. Also watch out for the toxic waste melty face scene, which produced the online images that lured me into watching this film at all.

There’s really nothing redeeming in this film. It smacks just a little bit of The Sentinel (1977) in delivery and The Changeling (1980) in premise, but brings not even remote honor to either. I’d skip this and let it be forgotten in the VHS video vaults of pawn shops and basement storage.

Amazon Customer
3.0 out of 5 stars Crap, but not as awful as some say
June 9, 2014
Format: DVDVerified Purchase
If you like crappy movies, and have enough beers in you, you can do a lot worse than spending an evening watching this. The interview with Findlay is somewhat entertaining and the DVD is pretty inexpensive. I was not as bored watching this as some people said they were. I found the leading lady to be easy on the eyes, and the weird lesbian killer thing kept me interested. The special effects are cheap, but that's half the fun. I did not find the movie to be incompetently made, just low budget. Worth a peek if your a Roberta Findlay completist or like these sort of movies like I do, but then again I enjoyed Snuff.
Read more
One person found this helpful
Helpful
Comment Report abuse

Chaetodinn
1.0 out of 5 stars Low-budget, cheesy, and comedic...but not intentionally comedic
April 30, 2014
Format: DVDVerified Purchase
Don't get me wrong, I love low-budget 80's horror flicks(and I have quite the collection)...however, this is garbage. The acting is laughable, special effects and make-up are like a late 60's art student's experimental film, and there isn't much to be said of music either. I haven't tossed or sold my copy yet because I feel that popping the DVD in to laugh at the "skull flying through hospital window scene" and "muppet-like corpse in the car" are just too funny. Believe it or not, many great low-budget 80's films could still deliver a good scare and not be embarrassingly funny. For example: "The Deadly Spawn(directed by Ted Bohas)," was filmed in remote New Jersey on a budget under $20,000 and yet the creatures were terrifying and original. Kiddies, go out and buy the DVD of "Deadly Spawn" instead...you'll have a much better time. Did I mention that this movie lulls on and on and is boring as hell...I'll leave that as a final note on the dreaded "Oracle."
Read more
Helpful
Comment Report abuse

Jennifer M. Hensley
3.0 out of 5 stars Nowhere near an original story but I like it!
December 3, 2009
Format: DVDVerified Purchase
First off, you can't go into comparing these horror flicks to big budget ones haha. That being said, if you can handle bad acting and appreciate the story itself, than you can enjoy this little horror flick. Besides, that old gypsy is kinda creepy. Again, not the strongest ghost flick you've seen already, but this one has its moments! Will Jennifer overcome her obsession with the gypsy's oracle!?....you'll just have to find out!
Read more
One person found this helpful
Helpful
Comment Report abuse

Fred Adelman
1.0 out of 5 stars Roberta Findlay phones it would n.
November 29, 2013
Format: DVDVerified Purchase
One of director Roberta Findlay's worst films of all time, but if you need to own every film she has made, this is the perfect DVD for you.
Read more
One person found this helpful
Helpful
Comment Report abuse

The Movie Guy
2.0 out of 5 stars SHUT UP JENNIFER!
November 30, 2014
Format: DVD
Jennifer (Caroline Capers Powers) discovers a necromancy writing box and decides to have fun with the expected consequences. Meanwhile there is a butch looking killer (Pam La Testa) running around in the city. Formula story, bad acting and dialogue.

The film attempts to create creepy with red fonts and a Rider Back Tarot deck. It has a shop, "The Magickal Child." That's magick with a "K" so it means something more. I also find it odd that a prostitute would be trying to pick up guys in front of a "male revue" establishment.

The film was made in an era where "veal" wasn't a four letter word.