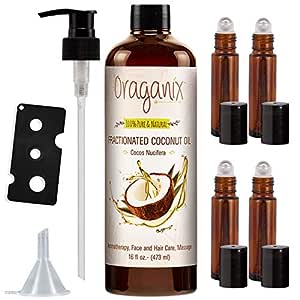 Extra Care for Your Hair!

Fractionated Coconut Oil has the same luscious moisturizing properties made lighter for better absorption. Ordinary coconut oil can lead to drying because its molecules are too thick for some hair types and can solidify too soon for massages.

When coconut oil is fractionated, the fatty acids are separated and solidified, then removed. Goodbye, dry, and weighed down feeling! Perfect for professional hairstylists who want to give their clients’ locks a more natural treatment option, and massage therapists for a speedier massage prep. It stays a liquid so there’s no need to heat it and is easy to store. Let the professionals apply it to your hair and skin ala carte, have it mixed with other oils, or go the DIY route. The choice is yours.

Enjoy your favorite essential oil without irritating your skin! Use Oraganix's fractionated coconut oil as the carrier oil and get the added benefits of the coconut's moisturizing properties and antioxidants.

Mix it with other oils and ingredients, like in deep tissue massage for better grip or aromatherapy for added health benefits and improved moods.

Unlike other ingredients, hardly anyone is allergic to coconut oil. It’s moisturizing and all-natural so there’s a very minimal chance of a client’s skin reacting, and certainly won’t damage the hair.

There’s no need to heat before using for a shorter prep time and it stays in its liquid form for much longer. Gone are the days of having to rush with each client.

4.7 out of 5 stars
4.7 out of 5
4,814 global ratings
How are ratings calculated?
To calculate the overall star rating and percentage breakdown by star, we don’t use a simple average. Instead, our system considers things like how recent a review is and if the reviewer bought the item on Amazon. It also analyzes reviews to verify trustworthiness.

tiffany
5.0 out of 5 stars Really good oil & products
Reviewed in the United States on January 1, 2019
Size: 16 Fl Oz (Pack of 1)Verified Purchase
This is one of the best quality coconut oils I’ve come across in a long time. I use it for everything. It’s lightweight, & doesn’t leave a sticky or oily residue like others. The roller balls are great quality, & the pump comes in handy. I’ve gifted this package to a few people in my downline, & they rave over it!
Read more
76 people found this helpful
Helpful
Report abuse

Sharon Townsend
5.0 out of 5 stars Great Purchase
Reviewed in the United States on November 17, 2018
Size: 16 Fl Oz (Pack of 1)Verified Purchase
I just received the Oraganix fractionated coconut oil with roller bottles included. I have already made two roller balls with my Young Living essential oils. The coconut oil is not greasy and the roller ball works well. The roller ball top is easy to insert. I am very happy with this purchase, and I will order again.
Read more
62 people found this helpful
Helpful
Report abuse

EnTK
5.0 out of 5 stars Nice
Reviewed in the United States on December 20, 2018
Size: 16 Fl Oz (Pack of 1)Verified Purchase
Nice neutral carrier oil for use with EOs. The rollerball 10 mls are nice, and the small funnel is super duper. Haven't figured out the flat plastic bottle opener, how or why to use that... but the oil with pump and rollers are super convenient.
Read more
47 people found this helpful
Helpful
Report abuse

Trisha Jester
5.0 out of 5 stars Great BUY
Reviewed in the United States on November 9, 2018
Size: 16 Fl Oz (Pack of 1)Verified Purchase
I love that this come as a set! Perfect for making my doTerra blends!!
Read more
47 people found this helpful
Helpful
Report abuse

Yazzers
5.0 out of 5 stars Great price for all that you get
Reviewed in the United States on December 6, 2018
Size: 16 Fl Oz (Pack of 1)Verified Purchase
I purchased the oil in order to make a chemical-free makeup remover at home. Found several "recipes" online which also call for castile soap (used unscented Dr. Bronner's). This organic oil was a good value including the four glass 10 ml bottles. Not crazy about the fact they are made in China, but product is good so far.
Read more
45 people found this helpful
Helpful
Report abuse

Beatrice Bates
4.0 out of 5 stars Great product
Reviewed in the United States on December 8, 2018
Size: 16 Fl Oz (Pack of 1)Verified Purchase
Love the oil but dispenser kinda sticks so it comes out in spurts and can be a little messy if your not careful
Read more
41 people found this helpful
Helpful
Report abuse