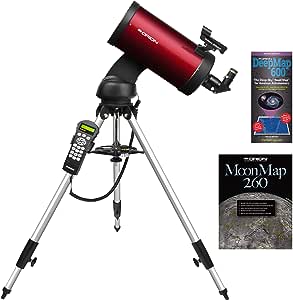 Brand: Orion
4.2 out of 5 stars 4 ratings
| 7 answered questions
Currently unavailable.
We don't know when or if this item will be back in stock.

The Orion StarSeeker IV 150mm GoTo Mak-Cass Telescope presents a winning combination of motorized object-location technology and great optical performance at an unbelievably low price. This smart GoTo telescope will lead you and your family on a guided tour of the stars. Featuring a compact Maksutov-Cassegrain optical tube with a big, 150mm mirror and an extra-long 1800mm focal length, the StarSeeker IV 150mm GoTo Mak-Cass weighs just 26.1 lbs. for easy transportability. The included SynScan GoTo hand controller contains a database of over 42,000 objects. Select from intuitive object menus or try the "Deep Sky Tour" mode to visit a selection of the evening's best objects. Once a target is pinpointed, the mount automatically tracks it to keep it centered in the eyepiece. What's more, the StarSeeker IV mount is now Wi-Fi enabled, which allows you to control it wirelessly from your smartphone or tablet! Just download the FREE SynScan Pro app to your iOS or Android device to enjoy wireless GoTo control! This fourth generation StarSeeker features dual optical encoders on each axis. This means the StarSeeker IV 150mm will not lose its GoTo alignment if you move the telescope manually. The mount's single-arm altazimuth design provides attached telescopes with 360-degrees of azimuth motion and 90-degrees of altitude motion for horizon-to-zenith pointing. A quick-release narrow dovetail saddle makes telescope attachment a snap. The StarSeeker IV 150mm features a stainless steel tripod that is much sturdier than previous models. Tripod stability is further enhanced with the dual-purpose spreader plate/accessory holder, which keeps the tripod rigid and provides a place to keep idle eyepieces and accessories. Includes GoTo hand controller, 23mm (78x) and 10mm (180x) wide-field 60-degree eyepieces, 90-degree diagonal, EZ Finder II sight, Orion DeepMap 600 and MoonMap 260.

Ben
5.0 out of 5 stars Wonderful telescope, more portable than a Dobsonian, pretty easy to use.
Reviewed in the United States on March 31, 2019
Verified Purchase
This is my second telescope, and I really like it. My first was a Dobsonian SkyQuest XT8.

The GoTo tracking is fantastic, and alignment is quite easy. It is significantly easier to use than manually pointing a telescope. With the knowledge I have now, if I were to do it all over again, I would definitely go for a telescope with a motorized mount, not necessarily this one, but one with a motorized mount. The views it produces are beautiful and sharp as you would expect from a telescope made by Orion at this price point even with the stock eyepieces. The first time you align it successfully, then have it point at something else entirely and it just goes there and shows it to you is amazing.

It can be a bit challenging to focus the telescope. The instant your hand touches the focuser, or any part of the telescope really, the image shakes quite a bit. I find the best way to focus is tiny amounts at a time, let the image stabilize by not touching the scope/focuser at all, then continue focusing. This is probably the biggest issue I have with the scope, and all things considered, it's a pretty small issue.

The manual does not mention the current requirements for the 12 volt port, I found that a 500 milli-amp adapter did not deliver enough power to move the motor, though it would power the hand controller. A 750 milli-amp adapter works well to power the motor. Additionally, the eight AA battery option works nicely as well.

Keeping the telescope deployed on its tripod is a little awkward to move around. Due to the tripod separating plate, the legs are very spread out and cannot bunch together for moving the scope around. However, it's not that big of a deal, it's easy enough to unscrew the plate and bunch the legs together, or simply not bother and just maneuver a bit more with the tripod spread out.

The 90 degree adapter for the focuser fits standard 1.25" eyepieces. The EZ Finder II is very easy to calibrate and use to quickly line up objects.

This telescope could use a leveling bubble built into the base of the tripod or into the motor, but it's easy enough to buy a small level to use to level the scope.

I use a Spectrum ST800G Solar Filter which works well on this telescope. This telescope's outer diameter is 7.5 inches, the ST800G is rated for 7.625 to 7.875 inches, which means the screws extend all the way, but it does work just fine and doesn't slide around when the screws are extended. The ST750G might work, but I am not sure, as its maximum rating is for 7.375 inch outer diameter telescopes.

drblevy13
4.0 out of 5 stars Great starter scope
Reviewed in the United States on June 14, 2020
Verified Purchase
Good beginner scope. I hadn't used a telescope in years before buying this. The optical design means that you won't have to mess around with collimation, and its light weight makes it a great "get up and go" scope. The alignment process for the GoTo mount is straightforward once you realize that for the second star in the alignment process the scope will most likely be way off and you will have to set the rate of movement to 9 in order to get it to point where you need it to be. I did not figure this out for 2 months and had resorted the star hopping to try to find objects until I found a video on Orion's website on how to correct this issue. Now, the scope usually points to any object I ask within a degree.

Also keep in mind that this telescope has a long focal length and a slow focal ratio of f/12. This means that while it will be fantastic for moon and planetary observation, deep sky objects will be harder to see. While I have been able to see many deep sky objects with this telescope and have marveled at the resolution I see on globular clusters, it is also been fairly disappointing trying to tease out any detail in galaxies even as large as Andromeda. If I had known ahead of time that this was best as a planetary scope, I probably would have chosen a Newtonian reflector on a Dobsonian mount as my first visual observation scope as the aperture that you would get for your dollar would be much greater than what you get with this scope.

On the flip side, the limitations of this telescope forced me to learn the night sky the old-fashioned way, which is greatly improved my knowledge and enjoyment of this hobby. I plan on training my 9-year-old daughter on this telescope. We have definitely gotten some amazing views of Jupiter and even (vert briefly) the solar panels on the international space station as it whipped by.

If planetary and moon observation is your goal and you are looking for a lightweight and simple telescope, look no further. However, if you are considering observing deep sky objects, you may want to seriously look at a Newtonian reflector instead keeping in mind that you will need to learn how to colimate which is not really a huge deal.
Read more
2 people found this helpful
Helpful
Comment Report abuse
See all reviews

3 stars because of bugs in the software of the handheld device. If you hit the escape button, it will freeze everything, no motor movement, no input on the controller.
I contacted tech support in the morning, turns-out it is a known bug in the system and showed me how to bypass the problem.

Here's my question:
-Why the !@#$ was this not in the user's manual, this was a showstopper that night and it's been raining since. (A post-it note on the packaging would've been better than nothing, IE: "Sorry for the inconvenience, but please don't hit the escape button after initializing, this will freeze the software and make the scope unusable until it is completely shut-down and rebooted").

It is a known issue with this model, why the shoddy programming isn't fixed before shipping?
This is a big expense, my first night ruined by a bug known by the manufacturer...
Read more
3 people found this helpful
Report abuse
See all reviews

Page 1 of 1 Start overPage 1 of 1
This shopping feature will continue to load items when the Enter key is pressed. In order to navigate out of this carousel please use your heading shortcut key to navigate to the next or previous heading.
Back
Next
Pages with related products. See and discover other items: cassegrain telescope, cassegrains telescope, telescopes moon, Best Rated in Catadioptric Telescopes, star telescope, star telescopes