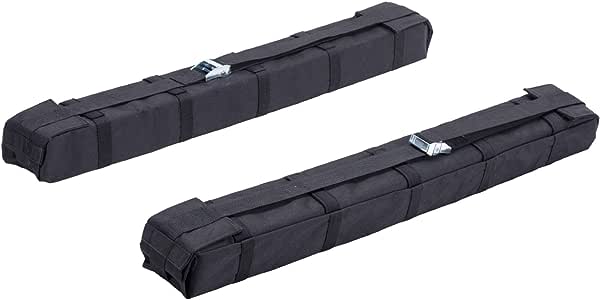 Made of ultra-soft material, our roof rack causes no scratching or scuffing to your car. With adjustable and heavy duty straps, our products can meet most of your sporting or tool needs. Ultra-long straps & aircraft buckles can definitely secure luggage over 165.3lbs, which decorates your journey with easy storage! Besides, our product has a universal car fitment, which ensures its versatility. With so many amazing features, come on and get one now!

4.0 out of 5 stars
4 out of 5
121 customer ratings
How does Amazon calculate star ratings?
Amazon calculates a product’s star ratings based on a machine learned model instead of a raw data average. The model takes into account factors including the age of a rating, whether the ratings are from verified purchasers, and factors that establish reviewer trustworthiness.

Amazon Purchaser
1.0 out of 5 stars The Orion car strap will last you six months before it falls apart.
Reviewed in the United States on October 22, 2018
Verified Purchase
I bought the Orion car strap six months ago and this is how long it lasted. Yesterday I was dropping my surfboard on my roof and when I pulled at the strap the strap came with me. I then started to look through the entire strap and found that I could terret apart like I could tear paper. Entire strap was dry and falling apart. I’m sorry but if I purchase a product like this I don’t expect it to last six months expect it to last at least two years. I would like the company to either send me a new strap or reimburse me for this .

I'll add to this. The straps have now completely disintegrated. Not even a year of use.

Eric
4.0 out of 5 stars Got the job done for cheap!
Reviewed in the United States on January 1, 2019
Verified Purchase
I needed a rack to get snowboard gear for four people to the mountains, and wasn't willing to buy an entire rack system for my car. After researching, I decided to try this option, super cheap and would arrive in time to install (I actually ordered a slightly more expensive option, but upon inspecting both there was not a discernable difference).

First off, it does the job.

Second, like many other reviews, this is not built to last long term.

Third, like many other reviews, buy extra straps, ratchet straps, and/or bungee cords.

Fourth, the locking mechanisms are not good on these. I would pull it super tight, barely move the strap and it would come loose. I tried everything to get them tighter. I finally attached a ratchet tie down, put the cable through and it was much tighter. Fair warning, it still will move on your roof, especially after driving on the freeway, there really isn't anything preventing it from moving, because the straps run through your door, so it can slide.

The scariest part for me was securing everything to the racks, again the lock in mechanisms on the 2 straps that came in the package are not great. Had I only used the 2 straps, I have no idea what would have happened. I triple knotted them and my gear was not secure. I then added 2 additional straps and about 8 bungee cords. Obviously that is what I felt I needed for my load, a much smaller load may only require the 2 straps (good luck).

Needless to say, 6 hours up the mountains and 6 hours down...no casualties, no damage, slight migration of the racks...my obsessive worrying and time spent loading and unloading was the only drawback.

I definitely recommend this as a cheap option, but strongly recommend buying (or using) extra straps/bungees!

4 stars only because of the hardware (I am also sure these straps will not last a long time, just my personal observation, but I was and am not expecting longevity. It did exactly what I needed, anything else is a bonus.

Pixel_dude
5.0 out of 5 stars Simple, easy, and worth it
Reviewed in the United States on November 16, 2017
Verified Purchase
Simple, easy to use for short trips. My electric vehicles don't hold 4 x 8 sheets of plywood, so I had to buy something to transport lumber from our local hardware store. I didn't want to buy anything exotic or difficult to put on, since it's light use and short trips. This soft roof rack did the trick. Very easy to install and adjust. No slippage during a 5 mile drive. Fastest speed was about 50mph, and the unit had no problems (although the straps I used to hold the plywood in place starting "singing" around 40mph.
Read more
14 people found this helpful
Helpful
Comment Report abuse

Roshan Bahmani
5.0 out of 5 stars So far so good
Reviewed in the United States on April 26, 2018
Verified Purchase
I got my 2 kayak from walmart and carry with it. I did not drive more than 40mph but pad did its job..it is pretty good and cheap solution for no roof rack cars..I have 17 fiesta and worked pretty good
Read more

Bruce A.
5.0 out of 5 stars No scratches, good for ~100 pounds
Reviewed in the United States on October 28, 2018
Verified Purchase
Installs or comes off in one minute!
Doesn't scratch my 2016 vehicle roof.
No wind noise like I had with my Yakima rack riding so high.
I stacked 2 kayaks for a short trip, but that bottomed out the padding with about 135 pounds.
With front and rear bungies, not included, I safely traveled 60mph. I haven't tested higher speeds yet.

Love the idea of taking it off so easily, throw it in the trunk while kayaking for added security.

A fraction of the price of metal roof kayak carriers and far superior for up to 100 pound single kayak, like a Hobie Revolution 16 or Adventure Island (hull and outriggers not stacked).

Be careful not to overtighten the straps, or you could damage your vehicle.

May not work with highly rounded roofs like my friend's 2012 Prius, or sunroofs.
Read more
8 people found this helpful
Helpful
Comment Report abuse

AtomC
5.0 out of 5 stars Works well for me!
Reviewed in the United States on April 19, 2018
Verified Purchase
So far so good! Work on my Acura TL and position so I can avoid the sunroof. I'm happy with the quality and ease of use. I've transported a single and tandem kayak, one at a time, with no issue. I strap over the top and through the doors then attach the front and back to keepers under the hood and trunk.
Read more
13 people found this helpful
Helpful
Comment Report abuse

fba
4.0 out of 5 stars It works!
Reviewed in the United States on September 16, 2018
Verified Purchase
I've used it on top of my hatchback to transport my paddle board around town. I love it!

The soft roof rack has a soft lining that that is not abrasive on your roof. It does not slide off. I love that even when compressed, it can still clear the 1.5" high antenna of my car.

The instructions are ok except for one thing. Instructions don't tell you the recommended placement/spacing of the racks. Copying the placement of the racks based on the picture was not the best idea for my small car. I've done it this way 3 times already but experts have suggested placing the front rack closer to the windshield. I'll move the front rack a little bit forward next time.

It's nice that 2 tie down straps are also included. I suggest placing one tie down strap right next to one roof rack strap against the car instead of on top of each other to prevent added stress on the car frame's rubber lining.

I just used 2 tie down straps to secure the paddle board for driving at speeds less than 50 mph. I might add more and front and rear tie down straps for highway speeds as suggested by other reviewers.