Image not available for
Color:
Visit the Ortho Store 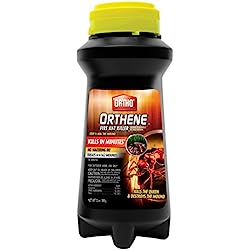 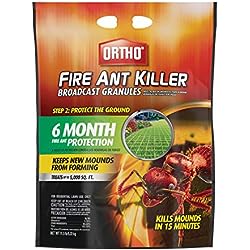 4.6 out of 5 stars
4.6 out of 5
14,836 global ratings
How are ratings calculated?
To calculate the overall star rating and percentage breakdown by star, we don’t use a simple average. Instead, our system considers things like how recent a review is and if the reviewer bought the item on Amazon. It also analyzes reviews to verify trustworthiness.

Maddie Tek
5.0 out of 5 stars ROACHES ARE GONE! WORKS LIKE A MAGIC FOR ROACHES
Reviewed in the United States on January 28, 2021
Style: Fire Ant Killer (2 Pack)Verified Purchase
I am telling you This things works like a magic for roaches!I was tired of this roaches and I stopped cooking because this little nasty creatures.They were all over the house, the kitchen was their headquarter....just when I was about to change an apartment because I could not get rid of them a family gave the rest of the product left and it was magic, I started seeing dead roaches everywhere..by three weeks they were all gone and my house feels like heaven now..Amazing
Read more
66 people found this helpful
Helpful
Report abuse

Jacquelynne Myers
5.0 out of 5 stars Orthene Fire Ant Killer kills Fire Ants and Gets Rid of Roaches
Reviewed in the United States on July 6, 2018
Style: Fire Ant KillerVerified Purchase
I live in a small apartment complex (2 duplexes facing each other). I didn't buy this product for fire ant control but after a recent heavy rainfall, a fire ant mound appeared in our tiny yard. I used the powder as directed and the next day the ants were gone, so I can tell you that Orthene Fire Ant Killer gets rid of fire ants. These ants are a huge problem here in Houston, TX. Their stings are very painful, and it's important to protect both humans and animals from these awful pests.

I bought this product because I have used it for four years to kill roaches. I moved into this apartment recently and I want to stop the roaches before they get started.

My last apartment had a horrid infestation of roaches even though they sent an exterminator every month. It was so bad that I went to the manager and cried and begged her to do something. She sent two ladies to clean the place and then she sprinkled a layer of Orthene Fire Ant Killer under my refrigerator ONLY. I swept up dead roaches for five days and then they were all gone from a two bedroom, one bath apartment. I re-applied it about every three months and I never saw another roach. I never let that exterminator back in my place again.

NOTE It is very important to apply this powder where people and pets can't get into it. You might be tempted to sprinkle it in cabinets or on baseboards. DON"T Under the fridge should be sufficient.
Read more
139 people found this helpful
Helpful
Report abuse

Kingwood Girl
3.0 out of 5 stars Works great, BUT IT SMELLS LIKE DEAD ANIMAL! Don't put near windows!
Reviewed in the United States on September 19, 2018
Style: Fire Ant Killer (2 Pack)Verified Purchase
This stuff kills those ants FAST, but... make sure you don't put it near your foundation or outside your windows. It will permeate your walls AND/OR the ants carry it into the walls, die and then you have the stench of dead ants and the poison. Seriously - for a month I thought I had a dead animal in my walls OR that my walls were wet and molding. It was driving me insane - I was pulling the electrical outlet plug plates off the walls and sticking my nose in there to smell, crawling along the floor baseboards to smell, everything! I was losing my mind. My husband can't smell very well, so he thought I was going nuts. I finally read a review on here about the smell and boy were they right! So, I went outside, swept up any of the ant killer I could see and then scrubbed the brick wall around the foundation and under the window. The smell disappeared in a couple of days. Great for out in the garden away from the house. NOT great for around the house/contact with the house.
Read more
117 people found this helpful
Helpful
Report abuse

Jamon
5.0 out of 5 stars Works for entire season.
Reviewed in the United States on May 10, 2019
Style: Fire Ant GranulesVerified Purchase
We live in south Louisiana and have severe fire ant problems. My wife has developed an allergy to fire ant bites. Twice a year treatment of our yard with Ortho Fire Ant Killer keeps them at bay. It's expensive, but it works and works for about 6 months.
Read more
61 people found this helpful
Helpful
Report abuse

DOM
3.0 out of 5 stars Works, but here's what you need to know...
Reviewed in the United States on October 17, 2018
Style: Fire Ant KillerVerified Purchase
This stuff works, but you want to be aware of a few things.

1. Smells horrible, though I personally don't care how it smells, so long as a product like this works. Therefore, I won't take off any points for this.
2. Always stand upwind when you sprinkle it on the mound. If you're downwind, you'll be far more likely to get a whiff of the powder, which will not be a delightful experience.
3. The container is a pretty good size, but it's only half full. Yes, the label says there's 12 oz. worth of powder, but most people don't have a solid idea how little the amount really is. When you see the container, you think it's got a lot in it. But open up the container and you'll find it only half full. I ordered FIVE of them and they all had the same amount, roughly half the container. Sure, probably 12 ounces like the label says, but I always feel cheated when I see containers half full. Seriously, if you aren't going to fill up the container, how about saving some plastic and put the powder in smaller containers?
4. Product says it will treat "up to 162 mounds." GOOD LUCK getting it to treat this many. Yes, I read the fine print and I know it says "up to" 162 mounds. When you see any product say "up to," read it as saying "Plan on using way more than the big print indicates, because the odds of you getting this much use out of it is roughly equal to winning the lottery!" The only way you will approach treating 162 mounds is if ALL your fire ant mounds are micro sized! Basically, the size of the palm of your hand or smaller. Some reviewers have noted that this stuff does not kill the fire ants. Orthene killed every single one of the mounds I treated. HOWEVER, you have to be sure to put enough on the mound. I bought 5 canisters because I have a large yard and knew I would need to do a lot of dusting. But it's nearly impossible to catch most mounds at a 4 inch diameter or less, which is the size you will use the least prescribed amount of Orthene. And to stretch it out to treat 162 mounds, ALL of the fire ant mounds you treat would have to be 4 inches or less in size. Many of the mounds I had were a foot across (vast majority were 8 inches+) and it takes A LOT of this stuff to work. Many mounds were not fully killed in the first go round, so I had to re-dust them. So I know I did not overuse this product. I followed carefully but still had to re-dust some of them the next day to finish them off.
5. Does not work nearly as fast as advertised. Like I said, it DOES work, but not as fast as claimed. Especially if I didn't dust the mound enough. I would go out the next day and find some mounds still active, though the fire ants were far fewer in numbers and they acted drunk.
6. I first ordered it just a few weeks ago. Was going to order more today, despite some misgivings, but the price had already gone up by more than $2. Per container!.
7. It's way faster than mound drenching. I was using a Bifen super concentrate to make up a solution, using my large spray tank and hauling the liquid around from mound to mound. You have to drench the mound with enough liquid to reach down to the queen, and it's time consuming. Dusting the mound is much faster.

Bottom line: It works, but not as fast as advertised. It stinks, but hey, it's poison, and you'll be more likely to keep it away from your face, which you should do anyway. Cans contain a small amount and will not treat many normal sized fire ant mounds. I bought 5 cans, like I mentioned, and I killed maybe 110 mounds, grand total.

THEREFORE... it works, but takes a good amount to do the job unless you only have tiny mounds, so each can does not go very far. Minus 2 stars for that. Otherwise, I would give it 5.

At the former price, it was cheaper than using a Bifen solution to drench the mound, as noted above. Now, drenching is cheaper because of the steep uptick in price of the Orthene, but the Orthene's more convenient and faster for treating lots of mounds. So I will be searching for other options before buying again.
Read more
36 people found this helpful
Helpful
Report abuse

V. Harrison
4.0 out of 5 stars Kills better than other products
Reviewed in the United States on December 12, 2018
Style: Fire Ant Killer (2 Pack)Verified Purchase
I have a 1 acre yard that has been overrun with fire ants to the point where the yard was unusable. I initially used 2 full containers on ant hills. I was probably over conservative in how much I used per hill because I have cats and dogs and wanted to minimize any chance of them walking through it. I would say, less than 50% came back a few feet away from the original hill. I used this on everything that came back and, once again, only about 50% returned. I went out a third time and have only seen sporadic hills since then that I hit as needed. I live in central FL and they are absolutely relentless. This seems to be keeping them to a very minimal level.
Read more
47 people found this helpful
Helpful
Report abuse
See all reviews
Back to top
Get to Know Us
Make Money with Us
Amazon Payment Products
Let Us Help You
EnglishChoose a language for shopping. United StatesChoose a country/region for shopping.
© 1996-2022, Amazon.com, Inc. or its affiliates