The Other Woman (Jane Ryland Book 1) and millions of other books are available for Amazon Kindle. Learn more
Share <Embed> 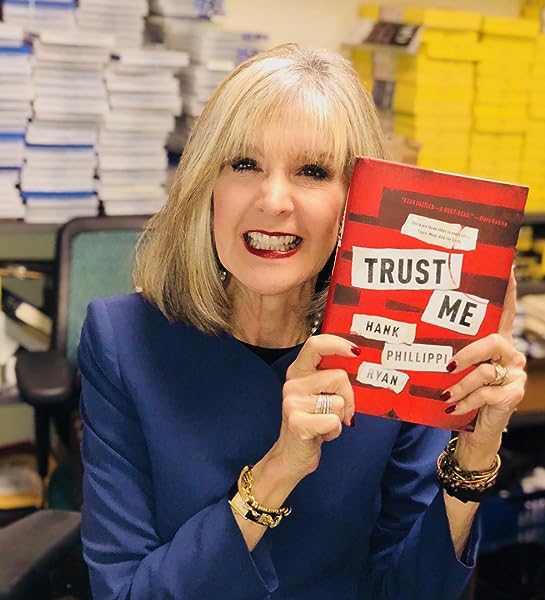 by Hank Phillippi Ryan (Author)
3.9 out of 5 stars 268 ratings
Book 1 of 5: Jane Ryland
See all formats and editions
Sorry, there was a problem loading this page. Try again.

HANK PHILLIPPI RYAN is the on-air investigative reporter for Boston's NBC affiliate. She's won 32 EMMYs, 12 Edward R. Murrow awards and dozens of other honors for her ground-breaking journalism. A bestselling author of six mystery novels, Ryan has won multiple prestigious awards for her crime fiction: the Agatha, Anthony, Macavity, and for THE OTHER WOMAN, the coveted Mary Higgins Clark Award. National reviews have called her a "master at crafting suspenseful mysteries" and "a superb and gifted storyteller." Her newest thriller, THE WRONG GIRL, has the extraordinary honor of winning the 2013 Agatha Award for Best Contemporary Novel! A six-week Boston Globe bestseller, it is also an Anthony and Daphne Award nominee, and was  dubbed "Another winner" in a Booklist starred review and "Stellar" by Library Journal.
She's on the national board of Mystery Writers of America and 2013 president of national Sisters in Crime.
Watch for her next novel, TRUTH BE TOLD, on October 7, 2014.
Start reading The Other Woman (Jane Ryland Book 1) on your Kindle in under a minute.

3.9 out of 5 stars
3.9 out of 5
268 global ratings
How are ratings calculated?
To calculate the overall star rating and percentage breakdown by star, we don’t use a simple average. Instead, our system considers things like how recent a review is and if the reviewer bought the item on Amazon. It also analyzes reviews to verify trustworthiness.
Top reviews

Boston Reader
5.0 out of 5 stars A Serial Killer And Politics
Reviewed in the United States on November 27, 2017
Verified Purchase
Meet Jane Ryland. She was recently let go from her job as a reporter for Channel 11 after being sued for slander after accusing a local supermarket owner of being involved in a sex scandal. She landed a job on the Register, a local newspaper- and like most newspapers these days, they're struggling. Jane is assigned to the current Senatorial election, primarily focusing on Governor Owen Lassiter. Jane believed that she has proof that the Governor is being unfaithful to his wife, but is it just a coincidence or is there more to the women in the red coat?

Meet Jake Brogan, Boston Police Homicide. He's investigating a series of murders the media believes is connected. They've dubbed the perpetrator "The Bridge Killer" since the murders took place near bridges throughout the city. But Jake does not believe the cases are connected. He has to prove that to the media, his superior officer and the public at large. But, when the body of another woman turns up, it changes everything for Jake and maybe even Jane.

I can see why Channel 7's own Hank Phillipi Ryan received so many nominations for this book. The characters are great. They are full of suspense and intrigue. And jumping back and forth between our suspects makes the mystery even interesting, revealing layers of possible motive. Jane Ryland is a great character. She reminds me of a female journalist version of Harry Bosch. A disgraced TV reporter turned newspaper reporter who looks into every angle, every crevice and leaves no stones unturned. My only complaint is Jake Brogan and the police stuff. I feel that the author used some creative licensing to write about the cop stuff, but I don't believe that the Boston Police department issues brown leather jackets to its officers. And I don't believe that a detective would wear a bullet proof vest durring a search. Maybe durring an arrest. And I doubt that detectives drive marked police cruisers unless if it was very necessary. But I could be wrong about some of this. Regarding these possible mistakes, this book was a definite thrill ride. I cannot wait to read the next one.

Sally
5.0 out of 5 stars Great Beginning to a New Series--Quite the Fun Ride
Reviewed in the United States on November 18, 2014
Verified Purchase
Hello, new suspense series!

I'm not quite sure what I expected, but The Other Woman far exceeded it. Jane Ryland's source has abandoned her and left her in a million dollar lurch of scandal. Now Ryland has been fired from her prestigious TV job and is slumming it in newspaper.

Two dead bodies have washed up under bridges, and Boston is more than apprehensive. Detective Jake Brogan doesn't think there's a serial killer, but he can't disprove it either--especially not when a third body washes up.

Meanwhile, Ryland has to take the fluff piece on a senator's race while fighting her attraction to Jake because, well, a relationship between a cop and a reporter would be trouble all around. I would say hilarity ensues, but it's really more like mayhem.

Without giving away any spoilers, this mystery has a lot of threads. Bear with the multiple narrators at the beginning because everything ties up quite nicely. Also, I really like the balance between Ryland's personal life and her professional life--the forbidden romance between her and Brogan is believable and intriguing.

Apart from the beginning which struck me as a little choppy--I think I was just adjusting to Ryan's style--this was a smooth read and a fun page turner. I'm in.
Read more
9 people found this helpful
Helpful
Report abuse

dennorino galvony
4.0 out of 5 stars All wrong but All Right
Reviewed in the United States on May 28, 2018
Verified Purchase
Career reporter Jane Ryland sweats out job loss, personal disgrace, financial ruin and a bad haircut. And that’s just Chapter 1 & 2. The body count rises as the senate election campaign gets mean and who will sort this mess out? It’s fun and addictive seeing how author Ryan skillfully weaves the hangman’s noose but who will be wearing it? Implied sex & violence instead of explicit details is refreshing and this father & grandfather appreciates the authors discretion.
Read more
4 people found this helpful
Helpful
Report abuse

Cindy Bauer
5.0 out of 5 stars Excellent Read!
Reviewed in the United States on September 12, 2021
Verified Purchase
Ryan has a way of giving you a little piece of information at a time, so you THINK you have it all figured out, only to discover time and time again, you don't. Had trouble putting it down; had to know what happened next. I've read several of Ryan's books and each one gets better. If you like a mystery that you just can't figure out, this book will keep you guessing. And you'll still be wrong! Excellent read and I give it 5 stars.
Read more
Helpful
Report abuse

Kait Carson
5.0 out of 5 stars Ryan Knocks it out of the Park
Reviewed in the United States on February 20, 2015
Verified Purchase
Ryan knocks it out of the park with this debut of a new series.Jane Ryland (a/k/a Wrong Guy Ryland) lost her job as an investigative news reporter with Channel 11 and finds herself taking a job as a newspaper reporter. Oh, yeah, in addition to losing her job--her tv station is on the hook for a $1,000,000 (yep, 7 figure) judgement because of Ryland's supposed mistakes. In the way of lawyers, they find a loophole and tell Jane she may be personally liable. So, there's a lot on the line for Jane with her current story. Well, not really her current story, so far those are all fluff, but with the story that is running counterpoint to her current story. Which all relates back to the Wrong Guy Ryland story. I can't say much more without giving away secrets. Like Jane, I refuse to reveal my sources. Suffice it to say that this book is great. A wonderful read, seamless plot, and a killer ending. Definitely a book that should be on everyone's TBR list. I know the rest of the series is on mine.
Read more
6 people found this helpful
Helpful
Report abuse
See all reviews

Hiroshi Izawa
5.0 out of 5 stars Great criminal story!
Reviewed in the United Kingdom on September 27, 2013
Verified Purchase
One of the best criminal story that I've read. This book was the first book for myself from this author, but now she has a "serial" reader for her works.
Read more
One person found this helpful
Report abuse

Laura J.
4.0 out of 5 stars worth the read.
Reviewed in Canada on November 13, 2020
Verified Purchase
Slow start and a lot of characters to keep track of but as you keep feeding it does draw you in.
Read more
Report abuse