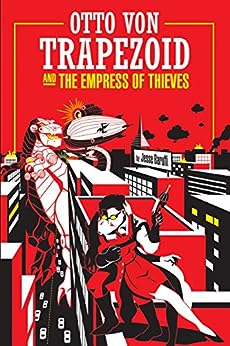 Otto Von Trapezoid and the Empress of Thieves Kindle Edition

4.7 out of 5 stars
4.7 out of 5
44 global ratings
How are ratings calculated?
To calculate the overall star rating and percentage breakdown by star, we don’t use a simple average. Instead, our system considers things like how recent a review is and if the reviewer bought the item on Amazon. It also analyzes reviews to verify trustworthiness.

Cloud Volpe
5.0 out of 5 stars A Wonderfully Cribdulent Novel
Reviewed in the United States on October 17, 2016
Verified Purchase
Otto Von Trapezoid and the Empress of Thieves is an impressive debut novel from Jesse Baruffi. It explores territory I don't believe I've ever seen in any form before, giving the reader a glimpse into what would happen if a pair of comically over-the-top globe-dominating supervillains fell in love. With bestseller charts dominated by dark, twisty thrillers and glittering vampires, it's really a nice change of pace to read something genuinely funny, original, and even genre-defying.

In order to pull something like this off properly, the author makes sure that his characters have both the humanity needed to root for them as protagonists as well as the absurdity needed to place them in the world Baruffi has created. Baruffi's Earth is a wonderful combination of parodies of everything from comic books to fantasy to television dramas to political satire, and all is handled extremely well. The characters in an endeavor like this could easily stray into one-dimensional caricatures, but Baruffi competently gives the important characters plenty of human moments and appropriate fleshing-out while wisely letting the more satirical characters do their thing without overstaying their welcome (I dare anyone not to love Lord Ironmask). No genre or archetype is safe from Baruffi's satire, and it all works hilariously well.

Getting into a plot synopsis would be redundant with the other reviews posted here without revealing the book's many surprises. Suffice it to say that the story moves along at an appropriate pace and at no point did I feel like there was any unnecessary filler or time-wasting. I laughed out loud several times during the course of reading, something I feel is a rarity in literature nowadays. The humor is subtle at times and in-your-face at other times, but never relies on cheap tricks like gross-out humor or excessive profanity to make it work. It's also worth mentioning that the writer has a knack for detail without getting into King-level verbosity, and his ability to write an action scene (of which there are just enough without going overboard) is excellent. As others have said, this would make a fantastic movie in any form - live-action, animated, or stop-motion - but there is so much wonderful absurdity and so many quick jokes to take in that I wouldn't wait for a movie to experience this story.

As others have suggested, I feel like there's a nice touch of Terry Pratchett and Neil Gaiman in Baruffi's writing, and appropriately the closest comparison I could make to this novel if someone asked me "What's it like?" would be Good Omens, but the author's voice, setting, and sense of humor/whimsy is entirely his own. I eagerly look forward to future work from Jesse Baruffi.
Read more
2 people found this helpful
Helpful
Report abuse

William P.
5.0 out of 5 stars Like the cover art hints at
Reviewed in the United States on February 25, 2016
Verified Purchase
Like the cover art hints at, this novel is a Saturday Morning Cartoon in book form. Put on your PJs, pour a bowl of Fruit Loops and get ready for a good time. Full of gags, jokes (both subtle and screamingly obvious), and constant send-ups of the superhero/action genre, this book entertains on nearly every page. Your face will hurt (in a good way) after each session reading it.
Read more
One person found this helpful
Helpful
Report abuse

Frank Hablawi
5.0 out of 5 stars Even Evil Jerks Deserve Love!
Reviewed in the United States on August 22, 2016
Verified Purchase
In an era where so-called heroes seem to barge their way into every conceivable medium,  Otto Von Trapezoid and the Empress of Thieves  let's some very bad people take the stage for a change - and what follows is a pretty amazing and unconventional love story.

Even complete bastards deserve their spot in the sun; even if they have to threaten, beat, explode, and extort their way to it.
Read more
One person found this helpful
Helpful
Report abuse

Brian Hale
4.0 out of 5 stars Jesse Baruffi doublehandedly takes down American pop culture
Reviewed in the United States on May 15, 2016
Verified Purchase
A lively, inventive, fun, and funny satire of 20th century science fiction. The Hitchhiker's Guide to the Galaxy meets Despicable Me -- in a frankly comicbook novel that will warm your thieving, greedy, world dominating heart.
Read more
One person found this helpful
Helpful
Report abuse

Jim Hardison
5.0 out of 5 stars Like a hilarious romance beteen Bond villains!
Reviewed in the United States on October 21, 2016
Verified Purchase
Very funny and entertaining. Sort of like a romance between two James Bond super villains but with the comic sensibility of the movie Airplane. I don't want to give anything away by saying too much--but it's a lot of fun.
Read more
Helpful
Report abuse

Donald S
5.0 out of 5 stars Highly entertaining.
Reviewed in the United States on March 6, 2020
Verified Purchase
A bit campy, a bit cartoonish, a bit over the top, what's not to like? I loved it!
Read more
Helpful
Report abuse

SomeGuy
4.0 out of 5 stars Toying with the whole super villain theme
Reviewed in the United States on October 21, 2016
Verified Purchase
Fun read, toying with the whole super villain theme. Bit labored in places, and the inevitable, and then the hero escapes, of the pulp genre. I would recommend it as fun light reading. Bwahhahah!
Read more
Helpful
Report abuse
See all reviews
Back to top
Get to Know Us
Make Money with Us
Amazon Payment Products
Let Us Help You
EnglishChoose a language for shopping. United StatesChoose a country/region for shopping.
© 1996-2021, Amazon.com, Inc. or its affiliates