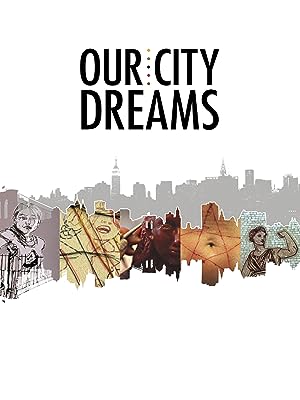 (10)6.81 h 27 min2009NR
Filmed over the course of two years, Our City Dreams is the story of a woman's struggles and successes as an artist in New York City.

A. ThieleReviewed in the United States on February 15, 2017
3.0 out of 5 starsMissed opportunity but interesting
Verified purchase
This was underwhelming and superficial but not bad. Five women artists are presented in sequences of 15-20min each, without introduction, without explaining why them (although the documentary shows them installing solo shows and similar and their art is related to gender, so it does become clear why), without bringing them together. The women are, in order of appearance: Swoon, Ghada Amer, Kiki Smith, Marina Abramovic, Nancy Spero. They do talk a little bit about New York City in very abstract ways, which they all moved to from elsewhere, and what home means to them. Some also touch upon the topic of relationship - Swoon and Amer both mention, in different words, that they felt the degree of involvement in their art precluded a long-term relationship. I learned separately that Smith lives alone and Abramovic had two short-lived marriages. Spero also felt she didn't have time for marriage when she was a young artist but she got married at 25 and ended up in a very happy and solid marriage to fellow artist Leon Golub, who died in 2004, some 50 years later. (She died in 2009.) We see their art. We also see them at openings of exhibitions about their art, which is how the viewer knows they are recognized artists, since there is no voice-over and no context given.

My favorite artists profiled were Ghada Amer and Kiki Smith, following by Nancy Spero. (I liked Swoon's art and she seemed personable but I didn't feel she wasn't very articulate about her art and so maybe she wasn't the best choice to open the documentary with. As for Abramovic... let's just say other people like her work more than I do.)

A good quote by Ghada Amer (slightly edited): "At first I wanted to fit in. And then I realized it's ok not to fit in. I fit in with people who are like me: people who don't fit in, people who have left their home and they've traveled and keep on traveling." The segment about her parents in Egypt and what they think about her art (you have to see the images of her art to understand why they're asked) was priceless. Their pride in their daughter's success is obvious. Interestingly, her father was the driving force who encouraged her to become who she wanted and go away and travel.

A good quote by Kiki Smith: "I’m much more comfortable with myself now than when I was 20-something and I think my work reflects that. Whether it makes for better art, I don't know."

There are a lot of good tidbits, for instance when Spero finally moved to NYC in a loft that wasn't meant for residential use like fellow artists, people had A.I.R. (Artist In Residence) painted on their doors to let the firefighters know there were people living there, in case of fire. Later that was the name given to the all-women's gallery she co-founded, and she mentions many women artists were reluctant to be associated with an all-women gallery.

Overall I felt there was a missed opportunity for an in-depth documentary about being a woman artist in NYC (you can't draw any generalization from the cases of those five, although at least a variety of ages are represented), but it was interesting nonetheless.

Carissa OettingerReviewed in the United States on June 30, 2016
4.0 out of 5 starsWorth Your Time
Verified purchase
This documentary gives a great insider's view of four female artists doing different types of work. I enjoyed the perspectives given by each woman, but I found myself wishing for a bit more footage on each one. The transitions from one artist to the next could also be abrupt, but overall this was an enjoyable film experience displaying the beauty of four different, and spectacular, New York artists.
Report abuse

Adriana B. CarrascoReviewed in the United States on May 30, 2010
5.0 out of 5 starsExcellent documentary!
Verified purchase
Watching this excellent documentary showing these wonderful artist's ways of thinking, their creative processes, their commitment to art, and how living in New York is special for them, was great! I have watched the film over 3 times already and each time I find something else to discover in it.
2 people found this helpful
Report abuse

Todd FadelReviewed in the United States on July 4, 2015
5.0 out of 5 starsLIFE-GIVING ART!
Verified purchase
Truly remarkable women in a captivating film!
Report abuse

lisa mayerReviewed in the United States on February 14, 2015
5.0 out of 5 starsFive Stars
Verified purchase
So inspiring!
Report abuse

The documentary "Our City Dreams" profiles five visual and performance artists - Swoon, Ghada Amer, Kiki Smith, Marina Abramovic and Nancy Spero - who have their homes and studios in New York City. Each of them comes from a different part of the world and each is at a different stage of her career and life. Director Chiara Clemente spends not much more than a few moments with each of the women as they dabble in their work and chat about their backgrounds, the struggles they've had to overcome as women artists, and their individual views on art.

"Our City Dreams" is probably of greatest interest to those who already have a degree of familiarity with some or all of the movie's subjects. For the run-of-the-mill disinterested observer, on the other hand, the movie will likely hold far less fascination. The problem may lie in the overreaching nature of the film which doesn't allow us to get to know as much about these women as we would if the film featured only one or two of them, say, instead of all five. Individually, they certainly seem like lovely people but they tend to subtract from - rather than add to - one another when lumped together as a group. That's not to say that there aren't some lyrical and poignant moments woven throughout the film; it's just that we don't feel we learn all that much about their art - or the influences on their art - in the short time we get to spend with them. In fact, the movie doesn't even really explore how New York City itself inspired or informed much of their output as artists, which is, we presume, the intended purpose and goal of the film.
2 people found this helpful
Report abuse
See all reviews
Back to top
Get to Know Us
Make Money with Us
Amazon Payment Products
Let Us Help You
EnglishChoose a language for shopping. United StatesChoose a country/region for shopping.
© 1996-2021, Amazon.com, Inc. or its affiliates