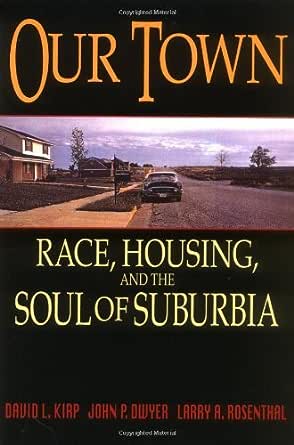 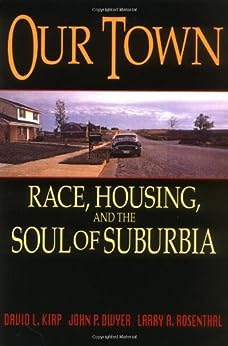 Our Town: Race, Housing, and the Soul of Suburbia Kindle Edition

Beginning with the development of Camden, New Jersey, the authors, professors of public policy and law (Univ. of California-Berkeley), examine the politics of land-use regulation and its impact on poor and black residents. It becomes abundantly clear why urban renewal in the 1960s and 1970s was frequently called "Negro removal." Their analysis focuses on the legal battle that developed as suburban development threatened black and poor residents of the nearby community of Mount Laurel. The Mount Laurel cases are traced through state and federal courts and assessed in terms of their encouragement of fair housing policies and discouragement of exclusionary zoning. This book is rich in detail and offers important insights into the politics of urban development and its impact on poorer residents. It will be invaluable to specialists in urban studies and planning and a fascinating read for others knowledgeable about urban politics and civil rights.
William Waugh Jr., Georgia State Univ., Atlanta
Copyright 1995 Reed Business Information, Inc. --This text refers to an out of print or unavailable edition of this title.

"... enable readers to see historical continuity and discontinuity in legal and popular discussions of race... -- The Nation

"This book is both an inspiring account of public interest law at its best..." -- The New York Times Book Review

"This book is valuable both as a case study of judicial activism and its consequences..." -- Urban Affairs Review --This text refers to the paperback edition.

DAVID L. KIRP, a professor of public policy at the University of California, Berkeley, is the author of Just Schools: Race and Schooling in America, Gender Justice, and Learning by Heart: AIDS and Schoolchildren in America's Communities (Rutgers University Press), and a regular contributor to Harper's, The Nation, the Atlantic Monthly, and the New York Times.

JOHN P. DWYER , John H. Boalt professor of law at the University of California, Berkeley, is a nationally recognized authority on environmental law and housing policy and law.

LARRY A. ROSENTHAL is an attorney and has served as a lecturer in the Graduate School of Public Policy at the University of California, Berkeley, and assistant editor of the Journal of Policy Analysis and Management.
--This text refers to an out of print or unavailable edition of this title.
Read more

katydaly@aol.com
5.0 out of 5 stars John Grisham fans should read this book instead!
Reviewed in the United States on February 11, 1998
"Our Town" is a poignant and powerful legal thriller. This is perhaps a surprising way to characterize a work by UCal, Berkeley policy wonks, published by one of the lesser known university presses, but this book deserves the widest possible readership. It tells the epic, heroic, heart-rending, and true story of the attempt to bring fair housing policy to New Jersey, the most suburban state in the country, and by extension, the most representative of American housing trends. It tells the story of an attempt by the African-American community of Mt. Laurel, New Jersey - a community whose origins date back to the colonial period - to create affordable housing in what was then, in 1968, a largely rural, white township of southern New Jersey. In response to thier request for the necesary zoning approval, the then mayor of Mt. Laurel (and wealthy farmer and late state senator) William Haines told the black community of Mt. LAurel: "if you people cannot afford to live in our town, then you will have to move." (this is a quotation from memory). The legals battles that followed over the next 25 years were epochal for New Jersey and for the country. This story is an epic (not unlike Jonathan Harr's book about the toxic wazste dumps in Massachusetts, A Civil Action) with genuine heroes such as Ethel Lawrence , the black New Jersey woman who led the fight, and even NJ supreme court justices who saw through the racism of Mt Laurel officials and the subtler but equally insidious intransigence of NJ governor Thomas Kean, who, for my money, is the worst villain of the lot. (I am, by the way, a New Jerseyan myself).Everyone who care about racial justice in America should find this book worthwhile. For an essentialy academic study, it is astonishingly moving. I read it in hardcover, when it first came out, mainly because I was attracted by its stylish cover, but it is the kind of book I actively recommend to my friends and family.
Read more
18 people found this helpful
Helpful
Comment Report abuse
See all reviews from the United States