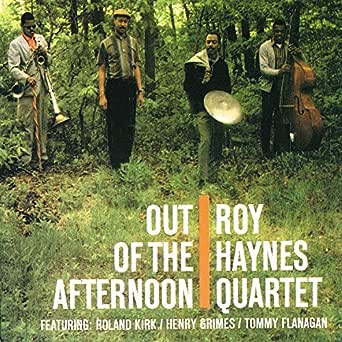 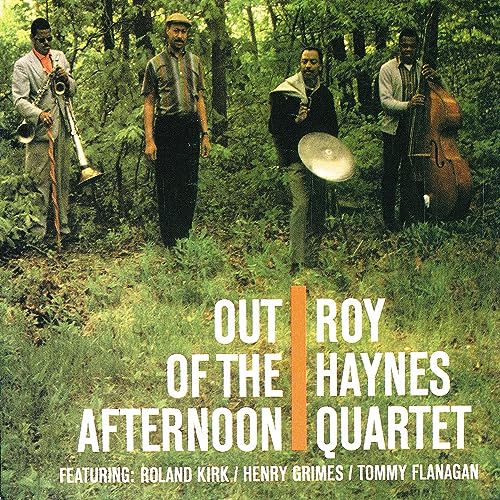 Out Of The Afternoon

P. Doby
5.0 out of 5 stars Jazz at its best!!!
Reviewed in the United States on August 13, 2008
Verified Purchase
Great CD if you love jazz. Haynes is an amazing drummer & his band really swings. A definite must buy for any lover of jazz.
Read more
Helpful
Comment Report abuse

Martin Paule
5.0 out of 5 stars Haynes + Kirk = An undervalued classic of jazz invention
Reviewed in the United States on May 22, 2009
Among the pantheon of jazz giants, Kirk and Haynes rank high on my list. Kirk, who amazingly, was sometimes dismissed as a novelty act on account of his multi-horn chops, had already created an enviable catalog of jazz sides for the Bethlehem and Emarcy labels. A brilliantly inventive improviser, fluent on numerous reed, wind, and brass instruments, Rahsaan Roland Kirk was also a masterful melodist who loved working with drummers who possessed a strong melodic thrust. Kirk and Haynes prove to be perfect foils for one another. Aside from playing off each other throughout this gem of an album, Haynes and Kirk demonstrate their eclectic and broad-ranging tastes on subtle, subdued ballads with Haynes working his brushes masterfully as well as hard-bop smokers where the two maestros keep upping the ante. As an unabashed groupie, I had the privilege of meeting and conversing with Rahsaan a number of times in the early and mid-'70s as well as witnessing some titanic performances. One such indelible show was in the summer of '72. In a final set at the intimate Lighthouse club in Hermosa Beach, Kirk played an all-gospel medley ending with his powerful take on the chestnut "Old Rugged Cross". Kirk had mastered a technique known as circular breathing allowing him to hold a note (or chord when playing multiple horns) indefinitely. With his left hand fingering his tenor sax and stritch (an antique reed instrument) forming a powerful held chord, Rahsaan extended his right hand to the crowd that came forward one person at a time to take his his hand. When my turn came, the contact was electric. It felt like a form of benign electricity was coursing through by body and being. Now, before you dismiss this as hippy-dippy blather, I must admit that I'm sometimes dubious about others reporting these sorts of experiences. And I've never had any other experience approaching this since. Anyway, if you're impressed with Kirk and Haynes, you're in luck. Kirk was prolific and Haynes continues to turn out brilliant albums to this day.
Read more
6 people found this helpful
Helpful
Comment Report abuse

Amazon Customer
4.0 out of 5 stars Roy Haynes is one of the best...and still playing
Reviewed in the United States on September 8, 2003
This recording is one I listen to specifically for Roy Haynes. I swear, at times he is more melodic than Roland Kirk. What a joy to hear a drummer 'play' the melody - or even just be melodic. Many drummers don't even understand what that means. Once, Jimmy Ponder was playing with a drummer (and ONLY a drummer) who had great chops, and was doing a good job, under the circumstances, of keeping it going. When it came time for his solo breaks, Ponder would occasionally turn and whisper, "Play the melody!" The drummer (a young buck) would look at me with an expression like a deer caught in headlights. During the break, he asked how in the world does a drummer 'play the melody'. I told him that you can do it in a variety of ways, like alluding to it in your rhythm, and then I suggested that he listen to Roy Haynes, among others, but I specifically gave him this CD to punctuate the point. As much as I like the drumming on this (and almost any other Haynes work), I have to agree that this is not of 5 star quality - the best of the best. That doesn't diminish it as a CD at all. I love Henry Grimes' bow bass work on "Raoul", and Kirk is inventive as always, especially on "Snap Crackle". A great Roy Haynes CD.
Read more
13 people found this helpful
Helpful
Comment Report abuse

Francis Bock
5.0 out of 5 stars One Of My Favorite Albums
Reviewed in the United States on July 15, 1999
I recommend Out On The Afternoon more than any album available today simply because it does not get the publicity that it so deserves. It may not be as "good" as My Favorite Things, Kind of Blue etc. but it is a fantastic record, and even more so considering that Roy Haynes had mostly been a sideman at this point in his career. The group and the playing are stellar. Roy is at his best behind the drums, playing stimulating, intense, and above all interesting rhythms and solos, but never becomes self indulgent. Rather, he goves much solo space to Roland Kirk (who simply roars!!), Henry Grymes (who is also with Roy on another fantastic album, Reaching Fourth by McCoy Tyner) and Tommy Flanagan. So definitely give this record a shot. It won't get all the hype that the new Trane Box got, but it's all here in one package. Snap Crackle Pop!
Read more
7 people found this helpful
Helpful
Comment Report abuse

MickeyMantle
5.0 out of 5 stars A Lifetime of this Album
Reviewed in the United States on June 15, 2013
As a young drummer who learned to play with records, I bought this album when it was released. Needless to say I agree with all previous praise. I was especially stunned by the crisp, bright sound production.
In 1990, still lamenting its not being on CD, I took my beloved album with me to see Roy headlining a Houston Labor Day jazz fest with Tony Williams' band. After the show, I bravely went backstage and asked Roy to sign it. He laughed and said, like, Where'd you get this?
After he complied, a diminutive Tony emerged from behind Roy and innocently asked, "Can I sign it, too?" A great night, for sure. And, yes, I still have it.

Mild Mavis
5.0 out of 5 stars Great music, great sound quality
Reviewed in the United Kingdom on May 8, 2017
Verified Purchase
This is my first album with Roy Haynes as leader though I have him as drummer on many albums. He proves to be able to create great music as lead and the sound quality is excellent.
Read more
Helpful
Sending feedback...
Thank you for your feedback.
Sorry, we failed to record your vote. Please try again
Report abuse

RedMcC
5.0 out of 5 stars Flawed Perfection
Reviewed in Canada on November 29, 2019
Verified Purchase
This is a great album. And this long awaited reissue sounded great but unfortunately the vinyl was flawed and I had to return it. Not Amazon's fault. The vinyl, when taken out of the sleeve had surface scratches which affected play in the form of crackles and pops on one track. I'd expect that from a used/vintage copy and be alright with it but not new, freshly unsealed. This album is highly recommended though. Beautiful.
Read more
Helpful
Sending feedback...
Thank you for your feedback.
Sorry, we failed to record your vote. Please try again
Report abuse

Chris
3.0 out of 5 stars Great music. Dusty record.
Reviewed in Canada on July 25, 2019
Verified Purchase
Great music. This new pressing was quite dusty. It plays like a 30 year old record.
Read more
Helpful
Sending feedback...
Thank you for your feedback.
Sorry, we failed to record your vote. Please try again
Report abuse

atwfs
5.0 out of 5 stars ローランド・カークの歴史的名演
Reviewed in Japan on November 30, 2003
Verified Purchase
リーダーこそロイ・ヘインズとなっていますがこれはローランド・カークを聴くアリバムです。
ビ・バップからコルトーレンまで、ジャズにおける過去の様々スタイルが顔を見せたかと思ったら、メロディセンス溢れるオリジナルなスタイルが。
ここでのカークは汲めども尽きないアイディアの宝庫。
特に３拍子の「Fly me to the moon」はあまりにも有名。
Read more
15 people found this helpful
Helpful
Sending feedback...
Thank you for your feedback.
Sorry, we failed to record your vote. Please try again
Report abuse
Translate review to English

Marek Cala
5.0 out of 5 stars Five Stars
Reviewed in the United Kingdom on August 18, 2015
Verified Purchase
I am completely satisfied.
Read more
Helpful
Sending feedback...
Thank you for your feedback.
Sorry, we failed to record your vote. Please try again
Report abuse