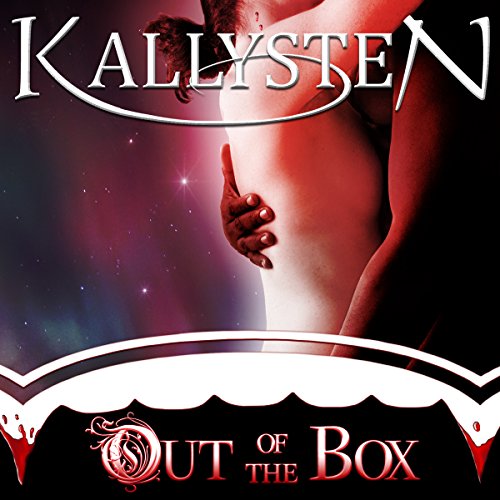 Out of the Box: Complete Series

Kallysten (Author, Publisher), Hollie Jackson (Narrator)
3.6 out of 5 stars 41 ratings
See all formats and editions
Sorry, there was a problem loading this page. Try again.

The first time Virginia went to the dance club On The Edge, she only wanted to find out what a night in a vampire’s arms would be like. Anando showed her it could be much, much more than she had imagined.

Over the next few months, every time she returned he continued to stretch her imagination and the boundaries she tried to set on their relationship.

Soon, though, Anando’s limits were tested as much as Virginia’s when their sexual encounters gave way to feelings neither of them had expected.

This is the entire Out of the Box series, volumes 1 through 10, collected in one audiobook. It also includes the freebie "Dancing" which is available on the author’s website. It does not include new material.

M. P.
4.0 out of 5 stars Loved the first few, but didn't care for the series as a whole
Reviewed in the United States 🇺🇸 on March 20, 2011
Verified Purchase
I really enjoyed this first book, and have read some Kallysten's other longer novels which I really enjoyed (Baby Steps was particularly good). Please keep in mind that this review is more about the series as a whole, rather than solely the first book. However, she set up this series of short stories with the first few being pure fantasy/erotica and then in later stories created a non-sexual connection between the characters which gave the series a predictable ending. Don't get me wrong, I love a good romance, but when a purely sexual chemistry turns into more it makes it difficult to believe without any other interaction between the characters. I found myself getting caught up in the sexual intrigue of the toy box and games of the first few stories that I found myself looking forward to the next stories and what new "games" they would play. When the tone of the stories abruptly changed to a love story it seemed to so starkly contrast with the first few stories that it was hard for me to stay on board with the characters.
Read more
Helpful
Report abuse

Great Customer
4.0 out of 5 stars Soft core erotica
Reviewed in the United States 🇺🇸 on June 18, 2011
Verified Purchase
This is a very short short story of what I would categorize soft core erotica. Perhaps it was so gentle because it was so short. Virginia meets the handsome Anando at On the Edge, a vampire club, and they are immediately drawn to one another. They end up in his bedroom where he proposes a game in which she picks something out of a "toy" chest and the sex will be built around whatever she picks.

If you are looking for heavy, steamy sex, this book is not for you. However, if you like erotica with a touch of gentleness (even with a vampire), you will enjoy this book. It was well written but, unlike other reviewers, it did not leave me craving
the next installment. That said, if another was posted for free, I would definitely read it.
Read more
Helpful
Report abuse

MtnGirl
5.0 out of 5 stars Wow...
Reviewed in the United States 🇺🇸 on July 10, 2009
Verified Purchase
Ok, so I love my Kindle. I love getting free, cheap, or samples of stories. I've read more than I ever have before. This was how I got this series (it was cheap!). I thought "for as little as they're charging for this, I won't be disappointed regardless". Boy was that the truth!

This series takes us on a journey to the forbidden. Where each night is a new "game" and all she has to do is reach inside the box and choose the theme. Very hot but very short, and by short I mean each installment is probably only 5-10 pages of a real book. Rats!! But definitely worth the quick read. Too bad they're not longer
Read more
17 people found this helpful
Helpful
Report abuse

Jeanne
4.0 out of 5 stars Exciting and Fun!
Reviewed in the United States 🇺🇸 on August 15, 2016
Verified Purchase
New and different with many twists and surprises with Anando and Virginia's relationship.
A little out of my usual from what I have read before but it developed into a fun and exciting read!
I received an ARC of this book in exchange for an honest review.
Read more
Helpful
Report abuse

Paranormal Romance & Authors That Rock
5.0 out of 5 stars Excellent !!!! Loved Out of the Box :)
Reviewed in the United States 🇺🇸 on March 5, 2013
Verified Purchase
First off I don't understand some of the bad Reviews. I mean what was you reading? For Me this Author is Talented as hell left me wanting more and not just more of the books *Hott* great reads Short yes but so worth checking out I much enjoyed on my way to read more from this Author Kallysten!!!! Dear Author Your Short Stories are Awesome can't wait to read the Rest !!!!
Read more
Helpful
Report abuse

Tanya Urban Fantasy Fanatic
3.0 out of 5 stars Ok story, too short
Reviewed in the United States 🇺🇸 on November 23, 2009
Verified Purchase
the story was ok, it was too short. Wow, I barely recognized that the male lead was a vampire. I won't be continuing this series.
Read more
Helpful
Report abuse

K. Harmon
3.0 out of 5 stars Okay
Reviewed in the United States 🇺🇸 on June 10, 2010
Verified Purchase
Too short, but hey it was only 0.99. I wouldn't buy anymore of this series.
Read more
Helpful
Report abuse
See all reviews

ROROBLUSMUM
3.0 out of 5 stars Novelette 1 of 10. Might have read the rest if they were freebies.
Reviewed in the United Kingdom 🇬🇧 on October 26, 2011
Verified Purchase
Not quite a novella, as this only took 5 mins to read. It's a very short first of ten tales about a human female called Virginia who visits a vampire club as she wants to experience being with a vampire - both for the sex, and to be fed from. She meets a vampire called Anando (which I found off-putting as my mind went off at a tangent and made me think of Nando's!), who is not typical of vampires, as he's not tall, nor dark nor that handsome. Hmmm, I wonder why the author thought that those characteristics would make him appealing?

Bunny
3.0 out of 5 stars Out of the box
Reviewed in the United Kingdom 🇬🇧 on June 6, 2011
Verified Purchase
This is just a teaser chapter and you need the rest to be able to read it as a single book. That said, it was interesting reading about Virginia dipping into pandora's box with hottie vampire Anando.
Read more
7 people found this helpful
Report abuse

TSegurado
5.0 out of 5 stars Not for the faint hearted!
Reviewed in the United Kingdom 🇬🇧 on August 25, 2011
Verified Purchase
Sassy, sexy and great! This story is great for a short read. filled with eroticism and passion in every page! very good! Go on and read to find out whats inside the box and pick your favourite one! ;P
Read more
Report abuse

M. Smart
3.0 out of 5 stars Very short
Reviewed in the United Kingdom 🇬🇧 on June 18, 2011
Verified Purchase
This is only part of a book.. good read but I would have liked the rest of the story to read..
Read more
3 people found this helpful
Report abuse