Out of Latvia and millions of other books are available for Amazon Kindle. Learn more 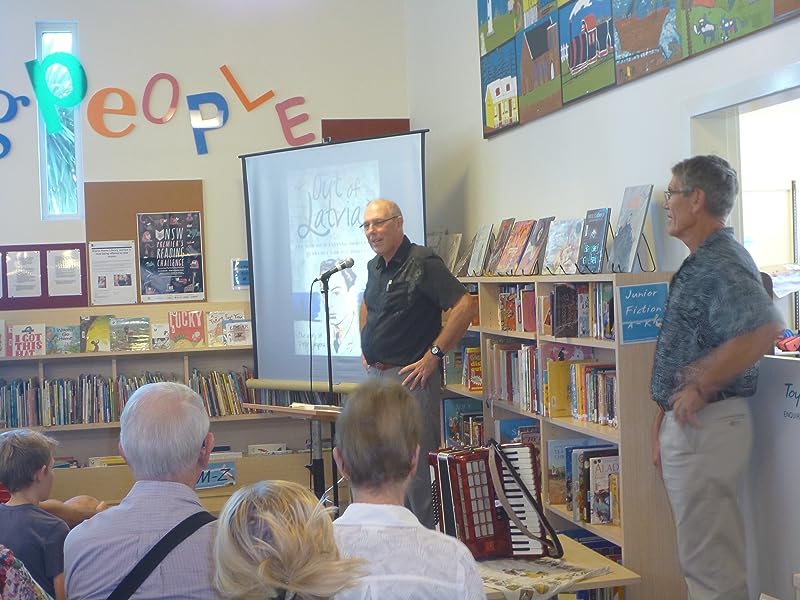 Out of Latvia: The Son of a Latvian Immigrant Searches for his Roots. Paperback – February 2, 2017

''David Kerr has unearthed an important story that is much bigger than one man's life and has as much relevance today as it ever did. It is the story of the heart-ache of a refugee and post-war migrant, and of a son's journeys to gain the love of his father, and how he wrestles with belonging to two places-the land of his birth, and the land of his ancestors.'' William Verity. Finalist: Walkley Freelance Journalist of the Year 2015
Start reading Out of Latvia on your Kindle in under a minute.

Donald R. Alford
5.0 out of 5 stars Outstanding Memoir and a Must Read !!!
Reviewed in the United States on February 22, 2017
Verified Purchase
After a wonderful food tour in Bologna, Italy we were fortunate to accompany Peter and Margie Jirgens for some wine and dinner. The stories that Peter told us were incredible - bordering on the unbelievable - and I was wondering "My God, if this is all true you have to write a book!" Well - here it is!! A very personal journey of a young man growing up in Australia, of Latvian descent. Poignant reflections of becoming a young man, and his relationship with his father - this book explores discrimination, heartbreak, joy, and intrigue. Making a journey back to Soviet controlled Latvia in 1980, Peter fulfills a lifelong dream of visiting his grandmother and relatives. The author David Kerr does an outstanding job of making you feel like you're right there with him. I couldn't put the book down, and read it in less than one day - yeah - it's that good!!
Read more
3 people found this helpful
Helpful
Report abuse

Kindle Customer
5.0 out of 5 stars Compelling and inspiring.
Reviewed in the United States on October 6, 2017
Verified Purchase
Well told, a reminder of the difficulties encountered by new Australians and how easy it is to be blind to their contributions. Inspiring.
Read more
Helpful
Report abuse

robert4460
4.0 out of 5 stars Four Stars
Reviewed in the United States on August 21, 2017
Verified Purchase
A real insight into a very helpful and generous person.
Read more
Helpful
Report abuse

C. Jay
5.0 out of 5 stars An important and timeless story, interesting and well written.
Reviewed in the United States on February 5, 2017
This is a really interesting book, well written and edited too. I didn't know anything about Latvia before I read it, and the history of Latvia during Soviet occupation revealed as part of the story is both fascinating and scary. I was shocked at the level of predjudice Peter's father endured during his early days in a new country, but then look at the world today - there are still refugees and still they are treated badly. This is why this is an important book; reading the stories of immigrants and their families helps you to really understand how it is for them. Though set in Australia and about a man who immigrated after WWII and his son Peter, elements of the story - such as wondering if the rest of the family is still alive, longing to return but unable to, and the children wanting to visit to know their heritage - would be repeated in every place where there are refugess trying to start a new life, so it's a story everyone in the first world countries should read.

I love the cover too. I believe the artwork is from Arnold Jirgens journal. The book includes photographs and some more drawings as well.

I received this book from the publisher in return for a review.
Read more
2 people found this helpful
Helpful
Report abuse

Ian Parker
5.0 out of 5 stars Fast paced, well written and hard to put down!
Reviewed in the United States on April 1, 2017
I thoroughly enjoyed this book, but I do have to admit to bias as both David, Peter and Margie are firm bike-riding buddies of mine. Over the last few years Peter has enthralled me with tales of his adventures and it is great to see David put them down for others to enjoy. The Latvian and Russian experiences were however new (and quite shocking) to me. I genuinely believe this book is one that you may find hard to put down. Well written and in several places quite suspenseful. Sad to hear the migrant bias existed so strongly in our local region not so many years ago, hopefully no longer! Thoroughly recommended!
Read more
One person found this helpful
Helpful
Report abuse

KEVIN BERRY, AUTHOR
4.0 out of 5 stars Interesting and informative
Reviewed in the United States on February 6, 2017
A really interesting memoir set partly in Australia and partly in Latvia. It's sad to read how the Latvian immigrants were treated so unfairly in their new country. Hopefully, memoirs like this will help to reduce that xenophobia in future. I most enjoyed reading about Latvia when it was controlled by the Soviets. I learnt a lot from that.
Read more
2 people found this helpful
Helpful
Report abuse
See all reviews

Amazon Customer
2.0 out of 5 stars WHICH LANGUAGE ARE YOUR BOOKS IN ?...NOT STATED IN ADVERT.
Reviewed in the United Kingdom on October 17, 2018
Verified Purchase
I ordered this book as a present for a Latvian lady...I thought that would be IN LATVIAN....but sadly it was in English...a great disappointment....No indication in your advert of course....Still it was happily recieved....unlike the LATVIAN JOKE BOOK which was rubbish and had to be thrown in the trash can immediately...So-oo-o...of the four books I ordered and paid for two were crap....two 'readable' although in English...YOU GET 50% SATISFACTION RATING !
Read more
Report abuse

CAR
3.0 out of 5 stars Interesting
Reviewed in Canada on March 13, 2019
Verified Purchase
It was an interesting story, and I enjoyed it more for my own family ties to Latvia than anything
Read more
Report abuse

sari
5.0 out of 5 stars Interesting life story
Reviewed in Germany on September 3, 2019
Verified Purchase
Having been in Latvia it was a very interesting read.
Read more
Report abuse

John Jeston
4.0 out of 5 stars A wonderful life
Reviewed in Australia on May 3, 2017
Verified Purchase
Great read of a fascinating life journey. The author has done a sensational job telling the story.
Read more
One person found this helpful
Report abuse