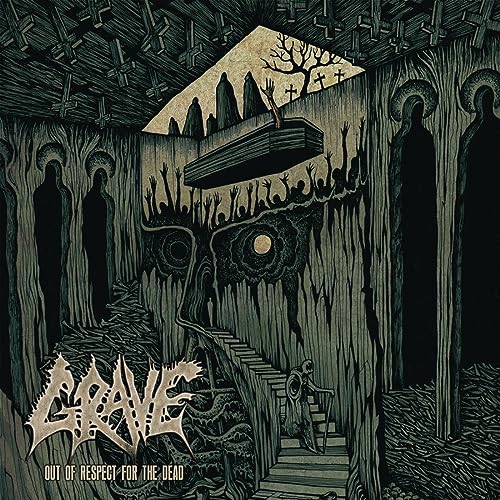 Out of Respect for the Dead

Joci Vesperi
5.0 out of 5 stars back to the grave!
Reviewed in the United States on October 22, 2015
Verified Purchase
very impressive album!
Read more
Helpful
Report abuse

J. Hill
TOP 1000 REVIEWER
5.0 out of 5 stars Respect the Grave
Reviewed in the United States on October 16, 2015
As usual, a new Grave album means plenty of kick-ass old-school death metal for your listening pleasure. They don't break any new ground or make any attempts to evolve or experiment, they just do what they do best, and continue to do it well. They established themselves from their early days as a death metal band willing to slow things down and go for a moody, doom metal style. Then, on Soulless and Hating Life, they developed into a groove-oriented death 'n' roll band, but that was in the mid-'90's when most metal music went out of favor and stopped selling. Grave went on a long hiatus, but returned for good in 2002, and ever since, they've released one quality album after another, some faster, some slower, but all pummeling Swedish death metal at its finest. Out of Respect for the Dead is an effective collection of tracks that does a nice job of balancing their speed, doom, and groove so that you get variety within each song and the album as a whole. Ola Lindgren's familiar ultra-thick guitar tone establishes from the start that Grave is back again in fine form. This a completely enjoyable album for anyone who likes these guys. My favorite tracks are Mass Grave Mass, the title track, The Ominous “They,” Deified, and Grotesque Glory. Mass Graves Mass mixes breakneck speed and slow doom with an occasional raw, punk-like guitar sound. The title track has awesome old-school riffs between the verses and classic Grave groove. The Ominous “They” is full of sheer power and some killer riffs. Deified also has crushing riffs amid several cool sections that fluidly shift tempos, not to mention a sweet bass solo. Grotesque Glory is a nearly ten minute journey through a little of everything that makes Grave what they are. Once again, I'm highly satisfied with new Grave. Pure death metal brutality from one of the originals.
Read more
12 people found this helpful
Helpful
Report abuse

Donald Roberts
5.0 out of 5 stars Out Of Respect For Old School Death Metal
Reviewed in the United States on October 22, 2015
Grave has put out consistently heavy and quality material throughout their entire career . Arguably , in the past decade , they've released some of their most lethal material. While I'll always prefer their first 3 albums with Jorgen Sandstrom, there's something unique and reassuring about their latest output that still excites me. This album picks up where the highly plausible Endless Procession Of Souls ended and adds subtle nuances to keep the listener entertained . Downtuned guitars , double bass drumming, tempo changes and thunderous vocals...they're all there .This album is hardly a progression but it does perfect the trifecta of albums with this current lineup since Burial Ground. With Grave , you know what you're getting . The band stubbornly refuses to stray from the niche that it has carved . Lyrical themes run the same : songs about supernatural elements, murder , religious hypocrisy and of course death . Ola's voice is an quires taste but one I've grown to take a liking to . The only criticism I can make it that Grave's discography bleeds together . Take any albums of theirs from the past decade and they're pretty much interchangeable ; some songs are memorable but for the most part hard to distinguish from one another . This is a minor complaint, though , as Grave have become a tried and true champion for death metal . Standout tracks include the title track , plain pine box, the ominous they and trail of ungodly trades . Long live Swedish Death Metal ! Now ...if we could only get Dismember to reform !
Read more
2 people found this helpful
Helpful
Report abuse
See all reviews