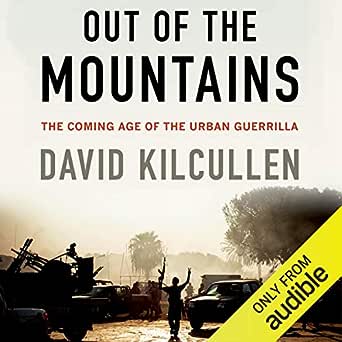 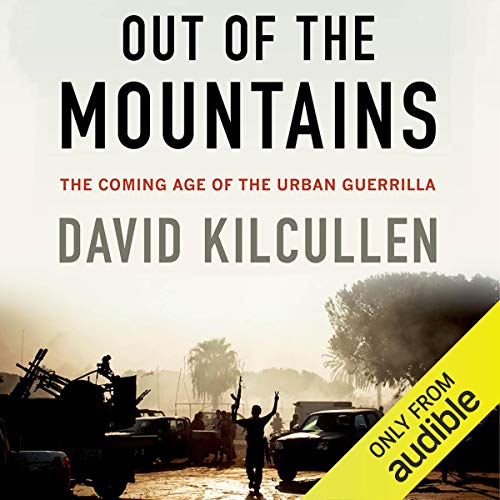 Out of the Mountains: The Coming Age of the Urban Guerrilla

Out of the Mountains: The Coming Age of the Urban Guerrilla
David Kilcullen (Author), Christopher Kipiniak (Narrator), Audible Studios (Publisher)
Get this audiobook free.
$14.95/mo after 30 days. Cancel anytime

4.6 out of 5 stars
4.6 out of 5
205 global ratings
How are ratings calculated?
To calculate the overall star rating and percentage breakdown by star, we don’t use a simple average. Instead, our system considers things like how recent a review is and if the reviewer bought the item on Amazon. It also analyzes reviews to verify trustworthiness.
Top reviews

fitzalling
VINE VOICE
5.0 out of 5 stars If you're interested in growing urban instability - read this
Reviewed in the United States on May 5, 2019
Verified Purchase
Mr. Kilcullen starts with an instance of mountain guerrilla warfare in which he is a participant. He contrasts this typical guerrilla warfare arising in remote and lightly populated areas with what he believes is the future of guerrilla warfare in heavily populated cities adjacent to large bodies of water (littoral areas). He reviews battles fought by insurgents in Mumbai, Mogadishu (the Black Hawk Down fight) and Tivoli Gardens, Jamaica. Mumbai and Mogadishu I had head of, but Tivoli Gardens in Jamaica was a new fight.

From these battles and others, the author develops a theory of competitive control. As he does so, he extends the book's reach, in my opinion, beyond guerrilla warfare into general control issues when instability arises. Think of the Yellow Jackets who have been protesting in France for half a year. He looks at the Taliban and others to argue that violence without more does not produce social stability. Competitive control requires a spectrum of force, from sheer violence to influence, to create the sort of social stability that allows a political entity to function effectively. I found his arguments persuasive. I had reviewed another book, The Counterinsurgency Challenge by Christopher D. Kolenda and Gen. Stanley McChrystal which had come to a similar conclusion that "winning hearts and minds" was not a fully satisfactory strategy. I encourage you to read the book to get a full grasp of his theory of competitive control. It may turn out to be a very useful tool.

As the book reviews the Arab Spring, he made some observations that I found surprising. First, in Tunisia, Libya and Egypt, the initial shock troops opposing these regimes' police forces were initially the Ultras, groups of rabid soccer fans who routinely got into fights with each other at soccer (outside the U.S., it's called football) games and, in so doing, got into fights with the police sent to break up their disturbances. So, for these groups, fighting with the police was not a new experience. When the regime sent its police to put down social disturbances, the Ultras were not cowed, quit fighting with each other and started fighting the police and other regime security forces. Other disaffected groups saw the Ultras fighting and decided to join in.

The regimes then made another mistake with, what I found to be, a surprising unintended consequence. The rioters and others disenchanted with the regimes in Tunisia, Libya and Egypt were using their cell and smart phones to coordinate their activities. This isn't surprising. So, the regimes basically tried to turn off the internet and cell service in their respective countries. A lot of people who weren't rioting or protesting couldn't use their phones. This radicalized them against the regimes. The author notes that there are 2 billion more phones on the earth than there are people with access to potable water. The use of a phone may be a more basic human right than access to water or freedom of political speech. The inability to use their phones to talk or text their friends, family or business associates radicalized many who had not previously been radicalized. I encourage you to look at these events and see what conclusions you draw.

Future social dislocation will occur in crowded, digitally connected and coastal cities. How to deal with these social disruptions will not be simple. The digital aspects of this in particular will require careful consideration. Urban instability will, in my opinion, be a growing phenomenon arising from political and social disruption, criminal activities and, in some cases, guerrilla activities. If these topics interest you, I believe that you will find the book to be worth your time.

h8bordum
5.0 out of 5 stars A Deep Dive Into Future Conflict
Reviewed in the United States on March 18, 2018
Verified Purchase
Kilcullen made his reputation with works like "The Accidental Guerilla," which dissected the complex of circumstances and motives that leads people into insurgencies. Here, Kilcullen looks forward at how four global trends--population growth, urbanization, littoralization, and connectivity, are shaping the environment for future conflicts. He argues, with compelling logic and illustrative anecdotes, that Western militaries must prepare for the likely possibility of conflict in the fast-growing, ill-governed, coastal megacities of the developing world. He provides much food for thought, observing that military power will be ineffective or counterproductive if not tailored to a keen grasp of the local social, political, and economic realities. Recommended reading for all natsec and forpol wonks.
Read more
3 people found this helpful
Helpful
Report abuse

bookworm2
5.0 out of 5 stars A Body Armor clad Prophet - 5 Stars!
Reviewed in the United States on March 14, 2016
Verified Purchase
This book is EXPLOSIVE and packed with predictions for our future conflicts that are backed up by past and current history. Having been in the DoD and with some experience fighting guerilla type war, I find Kilcullen to be SPOT ON with his analysis of conflict history and chillingly accurate with his predictions, (as some of what he predicts has already started to play out around the world). Tip: Read with a highlighter and pencil for annotating the margins with your thoughts. A must read for anyone who is concerned about the future of civilization and world society as we've known it.
Read more
2 people found this helpful
Helpful
Report abuse

Larry West
4.0 out of 5 stars Excellent research; dry at times
Reviewed in the United States on February 27, 2016
Verified Purchase
This is a good book but definitely not a page turner. It goes into great detail on every topic which makes it drawn out at times. The actual subject is very interesting and Kilcullen does an amazing job examining several issues through the lens of a sociologist as well as military and political expert. If you can commit to reading through the dry parts, this is a very interesting book and has some fresh ideas/concepts.
Read more
4 people found this helpful
Helpful
Report abuse

Sotto voce
VINE VOICE
5.0 out of 5 stars A realpolitik must read
Reviewed in the United States on February 4, 2014
Verified Purchase
Other reviewers have covered the details. Some reviewers categorize it as warfare book. I didn't see it as a warfare book but rather, it's a look at the dynamics of social development in the 3rd world which coincidently will include conflicts that are far different than we are familiar with on many levels.

My input is simply that I read this book months ago. I've spent time in some of the places described. I get it. Barely a day goes by that I don't reflect back on some aspect of Kilcullen's thesis to understand and comprehend the implications to realpolitik to challenge the nation state for governance.

Great book for high information seekers! I've recommended it a dozen times or so to friends that are like me, trying to understand what we see.
Read more
6 people found this helpful
Helpful
Report abuse

Malpaso
5.0 out of 5 stars Wealth of knowledge in a variety of disciplines.
Reviewed in the United States on May 14, 2016
Verified Purchase
This book is a wealth of knowledge for military strategists, anthropologists, emergency managers, political scientists, historians and probably some other groups/professions as well. While it is not directed at any one of those in particular, any and all of them can utilize the information to their advantage. The only negative I had (and would have given the book 4-1/2 stars if possible) is that the author is not as adept in his analysis as he is in his presentation. That said, if you are using the facts and not the speculation, it is a valuable tool.
Read more
3 people found this helpful
Helpful
Report abuse

Andrew Paul Betson
4.0 out of 5 stars City as an Organism - Peoples Seek Order
Reviewed in the United States on August 7, 2018
Verified Purchase
Looking at cities as organisms was exceedingly helpful and instantly recognizable in my occupation which had be in a destroyed city while reading. Still very Social Sciency, with a couple of instances of strained application (Afghanistan and the littoral area).

Opening story set a tone of smarminess that can sometimes define the Petraeus-Nagl-Exum luddites. Nonetheless, Kilcullen delivers an intriguing approach to think about where future conflict may be.
Read more
Helpful
Report abuse
See all reviews

Barbouze
5.0 out of 5 stars Brilliant exposition on geopolitical shifts in the nature of conflict and war
Reviewed in the United Kingdom on March 7, 2018
Verified Purchase
Brilliant. Kilcullen is so well-informed and widely read, and wears his expertise lightly. He writes with a novelist's flair, and a masterly assembly and control of facts. If you want to know the future of warfare, where conflict is likely to occur and the shape it is likely to take, read this. Even as a treatise on urbanism, it is fascinating. I'd give it six stars if i could.
Read more
Report abuse