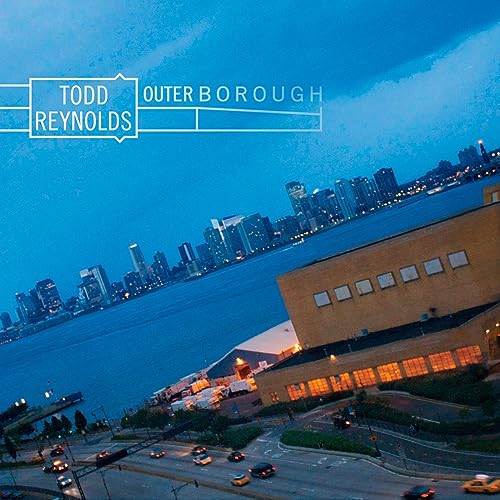 Listen Now
Buy MP3 Album $17.98
Your Amazon Music account is currently associated with a different marketplace. To enjoy Prime Music, go to Your Music Library and transfer your account to Amazon.com (US).

Vajra
5.0 out of 5 stars Move to Outerborough. Rents are cheap and the neighborhood is rather lively.
Reviewed in the United States on October 18, 2013
Verified Purchase
This is one heck of a recording from Todd Reynolds, both solo and also assisted by a very talented crew of equally eclectic and forward thinking artists on a number of tracks. Adventurous is the order of the day with all involved. The audio quality is way above par, and the nature of the artist and the audio art that Todd produces really reset the bar for any notions of "par". Like so many other musicians and composers exploring the so-called fringe of new music, this disc breaks through a few boundaries as it goes on. Topples 'em. But,unlike some other equally admirable folks doing the same, Todd's music is quite lively, listenable,multi-leveled, and jest downright perky at times. Without being at any time pretentious or inaccessible. This disc is made for deep listening no doubt however,an easily skill given the time, and will reward any listener who does so over and over again. The rewards will be varied as well as numerous. Music listening is obviously one of the flat out healthiest things that anyone can do, and this stellar disc affords one more opportunity to join the club at this all ages, everyone welcomed, sonic spa. Whether done in this way, or any other , no doubt you will be no doubt be left with a smile on your face and pleasure at the thought that music such as this goes on. An inspiring disc for all.
Read more
Helpful
Report abuse

Mike Maguire
5.0 out of 5 stars Todd Reynolds / Outerborough/ Innova
Reviewed in the United States on June 24, 2011
This two CD set revolves around the musical exploits of one insanely talented fiddler/composer, Todd Reynolds. The first CD is just his music; the second is Reynolds performing mostly NYC composers.
First of all, it's great to get my hands on the 1st CD, as there has been so much buzz! Reynolds is definitely part of the new generation of post-post-minimalist but there is a kind of deeply intuitive, uber-musicality going on here that sets him apart from his peers. I love the pan-diatonic openness, warmth, and generosity usually found in jazzers like Pat Metheny or Keith Jarrett -it's completely disarming. Reynolds' heart is all over this CD--this is no composer/mathematician working out his angst-ridden reason for being. This is a very solid performer/composer expressing himself in the most direct way possible. Let me give you an overview about what all the fuss is about:
Track 1.Transamerica
The influence here is electronica and minimalism-, but this is no namby-pamby groove. It's very metered electronica with Stravinsky-like shocking inserts. In using a limited amount of material in as many ways as possible, it brings tremendous focus to the music. Of course, it helps that his fiddle playing is scorchingly hot with impeccable intonation, rhythm, and phrasing. All the way through the acoustic element is in perfect balance with the electronics.
2 The Solution
It starts with pizz. canons/delays and a very simple modal progression. Polytonal sustain strings enter reminiscent of Reich's string writing (It is also vaguely reminiscing of a Matt McBain CD I reviewed recently). What follows is stereoized arco chords followed by thick, pan diatonic chords which are seriously drop-dead beautiful. Overtop is some very cool Kreisleresque solo violin improv, with constant great jazz detailing in the harmonic writing. The ending involves a pizz. return of the opening with some gorgeous stereo imaging.
3. End of Day
Here a renaissance progression is repeated with extremely even bowing. This guy is no sloth as a musician. This soon becomes a theme and variations, again with nice jazz harmonies tossed in at the end of phrases. Gradually the material gets phase/ delayed creating a beautiful, Lassus-like, eastern European, spiritual, minimalism.
4. Task force
More amazingly sharp, detailed, colorful playing featuring jette, pizz trems, harmonics and some very heart-felt grooves. The playing is very assured, with very subtle use of electronics. This reminds me a bit of Reich electronic remixes; only here the music is more fluid, less canonic, cookie-cutterish. It just flows seamlessly from one section to the next.
5. Centrifuge
This piece is slightly faster, complete with a head one usually associates with death metal. Reading the liner notes this piece was written for a guitarbot(!!) And as I'm reading, it's great the way the piece gradually starts to sound like Deep South blues in very slow motion.
6.Outerbouough
Number 6 opens with pizz. delay and right away has a NYC subway feel ---you can hear this without even reading the liner notes. There's a real lightness, transparence and unclutteredness in the writing. Eventually more great solo playing emerge overtop. Although it's more in the trance minimalist bin (it's music for video), there are lots of coloristic delicacies to sink ones' ears into. The percussive sounds are very fresh -they have a homemade crispness.
7. Sleeves of Green
Great groove harmonics open the track followed by nice explorations of the violin timbres. Overlade on top lots of backwards violin while Green Sleeves acts as the cantus firmus. He's also never afraid to get a groove on.

The second CD could never live up to the musical onslaught of the first, even though it's resplendent with better-known composers.
1. A needle pulling thread /Phil Kline
The Cantus firmus is in canon with Webernesque pauses articulating the structure. This folds into a nice electronica, dark groove. In the later harmonized version of the cantus fimus, there is a fresh use of chromaticism and overlapping textures. This is a cool spin on classical music meets minimalism meets electroinca. The beautiful bass progression towards the end opens to high tremelo strings.
2. Tree-oh /Michael Gordon.
By far my favorite piece on he 2nd CD, Gordon presents a kind of renaissance progression beautifully distorted with cross rhythms--both written and by using delay or overdubbing. As usual, Gordon's material is very stark and sparse with lots of surprise modulations. A kind of intense hypnotic minimalism ensues. Gradually the music seems to be physically lurch from side to side in its' Andriessenesque starkness. It feels/sounds like going down in an airplane during extreme turbulence. His music has a way of attacking the listeners whole being, so the more sensitive individuals beware. And stay away from drugs also!
3. Inward Bound /Paul De Jong
The 3rd track is something completely different -simple, child-like glockenspiel, toy piano, Biork-like electronics. There's a beautiful overlay of violin on top. Throughout a lot of sensitivity to color, intertwined with a pop sensibility (except for all the gorgeous detail).
4. Crossroad /Michael Lawenstern
Here the composer uses a blues sample not unlike Moby. Overtop is some very authentic Appalachian fiddle playing. Then a serious Pop ride and kick enter, while Reynolds does some very hip improv overtop.
5. And the sky was still there /David T. Little
Little's piece opens with some cool progression in the fender Rhodes, while a political narrative unfolds overtop. It's not my place to comment on this powerful jab at the military industrial complex, but musically it's evenly marked, metered bar lengths phrasing, while Reynolds does some amazing distorted flanging overtop.
Cool piece!
6. Fast pasture /Nick Zammuto
Retro Electronic!! An old moog bubbles with all kinds of modulating patches inserted, while Reynolds is doubling 16th note sequenced/arpeggiated lines on top. There's something very nostalgic about the writing -when electronic music sounded like, well, electronic music. One really odd thing--there are environmental wind and bird noises in the background throughout the piece. Hilarious and very weird.
7. Storm Drain /Ken Thomson
Number 7 is for bass clarinet and violin and opens with a simple pizz. pattern and with a Quaker-like harmonic accompaniment. This is very much the most conservative piece on the CD.
8. The end of an Organge /Paula Mauthusen
It starts with text, then humming over top, much in the `stile Oliveros/ Monk /Anderson'. There's a kind of whimsy one associates with women composers,
in that it's more theater than music--it's more about the moment than composition process.
9. Killer /David Lang
The final piece is a metered, distorted, harmonic progression accompanied by interlocking, arpeggiated, distortion on violin. The complexities of the interlocking never really goes anywhere but this compositional decision is seminal to a lot of Lang's work. There is always a still, non-momentum quality in Lang's music, not unlike a dark period Rothko or all period Franz Kline.

This 2nd CD has a very broad range of post-minimalist composers--to the point some are clearly not post minimalist composers. There are some real gems on here -pick and choose. It's also never clear, in the recording sessions, where Reynolds' chops begin and the composer ends.
Read more
6 people found this helpful
Helpful
Report abuse

Paleo Adorno
4.0 out of 5 stars A strong album worth checking out!
Reviewed in the United States on October 5, 2020
Thoroughly enjoyable works here. The format is great with one CD a set of Reynolds' own compositions, and the second CD performances of works by a roster of NYC contemporary composers. Reynolds offer a range of aural experiences, while all the pieces fit under something of a post-minimalist umbrella with luminous atmosphere and textures.
Read more
Helpful
Report abuse

ekb
5.0 out of 5 stars Wow
Reviewed in the United States on December 14, 2011
Eargasm. Beautifully written and performed. This album exists on its own sonic plane. My personal favorites are Fast Pasture and Crossroads.
Read more
One person found this helpful
Helpful
Report abuse
See all reviews