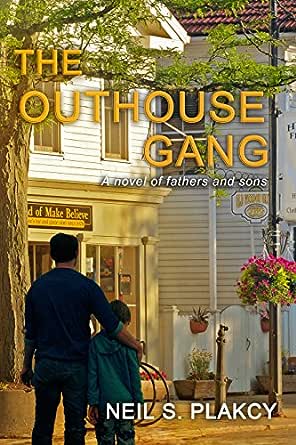 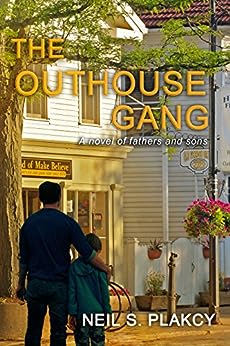 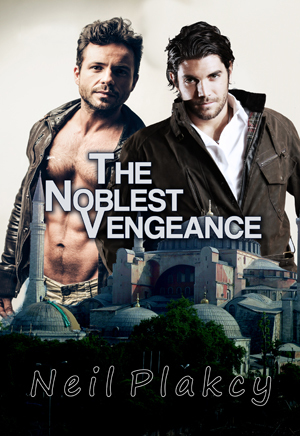 The Outhouse Gang: A novel of fathers and sons Kindle Edition

Neil Plakcy grew up in a town very much like Stewart's Crossing, at a time when the world was changing a great deal for fathers and sons. The connection between men and their male offspring is an important issue in many of his books, including the Mahu mystery series, the short story "At the Diner" and the mystery novel In Dog We Trust. --This text refers to an alternate kindle_edition edition.

After my father passed away, I began thinking about what his life must have been like during the years when I was a kid, in southeastern Pennsylvania, in the 1960s and 1970s. He was an older dad, 38 when I was born, and he worked long hours as an aeronautical engineer, with a commute that took him away from home before I woke up and brought him back, tired, at dinner time.

On the weekends, my mother ran errands and my father worked around the house or in his wood and metal shop in the basement. On rare occasions during the summer he'd get out to the lake in the back yard to fish. He was active in our neighborhood association and always willing to help out a friend or neighbor. He wasn't the kind of dad to go out and play with a kid in the back yard, and he had a temper-- but he was also my role model for how to grow up.

At the time, I was reading Iron John by Robert Bly and other books about the men's movement, and I was searching for my own understanding of what it meant to be a man. I was also reading How to Make an American Quilt by Whitney Otto, and I liked the way she constructed interconnected stories-- like pieces of a patchwork quilt-- that added up to something larger.

But I didn't really understand the stories I wanted to tell until I read about an event in Hallandale, Florida, the town next door to where I lived. Every year at Halloween a group of local men, all anonymous, decorated an outhouse with political slogans and delivered it to City Hall. A festival had grown up around the event.

I transported that event to a little town called Stewart's Crossing, in Bucks County, Pennsylvania. It's very much like Yardley, the town where I grew up. And the men in the story are a lot like the men I saw around me-- working guys with a commitment to family and community.

I took the first story in the book, "Chuck - 1963," to the Bread Loaf Writer's Conference, where I got some great advice. One savvy author pointed me toward Freud's connection between excrement and money, and that helped me crystallize what Chuck's problems were, and why he was motivated to start the gang. --This text refers to an alternate kindle_edition edition.

"The Outhouse Gang succeeds, and admirably, on charm and a certain nostalgic grace, and those are virtues I think over neglected in today's fiction-world." --Victor Banis, GL Fiction Book Reviews --This text refers to an alternate kindle_edition edition.
Read more

Victor J. Banis
4.0 out of 5 stars charm and nostalgia
Reviewed in the United States on November 19, 2010
The story is set in the small Pennsylvania town of Stewart's Crossing starting in 1963. To give their lives a little punch, a group of men steal an outhouse on the night before Halloween and leave it in front of the town hall. This becomes an annual event and the locals, not knowing who they are, dub them The Outhouse Gang.
From this somewhat slender thread the author hangs a series of vignettes, alternating from the viewpoints of the various men in the group, and covering the years up to 1988. This was a tumultuous time--the Vietnam war, the cultural revolution, hippies, drugs, the increasing independence of younger generations--and it's interesting to see it as a backdrop (and a contrast) to the small town lives of the characters. This is a big canvas to cover, however, and the cast of characters is large, so much of the story is sketched in where sometimes I would like to have seen it painted large.
There's some very lovely writing here, as one would expect from this author. Here, for instance, and very early on (giving you a good sense of what is to come) he tells you much about the marriage of the hardware store owner by saying little: "During the day he wore a canvas apron over his plaid shirt and jeans. Stray nails, twist-ties, plastic bags, washers and odd pieces of paper always ended up in the pockets of his apron. He'd take it off at the end of the day, puzzled by how much he had accumulated. It was like that with his marriage, too."
Most readers will enjoy this book. How well they enjoy it depends upon what one is looking for in a read. If you're seeking heart-stopping excitement, this isn't the place to look, and if you want to test wits with the author, you'll probably have more fun with one of Mister Plakcy's first rate mystery stories. Much of what I've read from this author in the past is challenging, the kind of fiction that charges boldly forward, where this novel tends to meander--like taking a stroll in a small town. Still, it's a pleasant stroll on which he leads us and familiar to anyone who has lived in a town like this, or anyone who lived through the years covered. It succeeds, and admirably, on charm and a certain nostalgic grace.