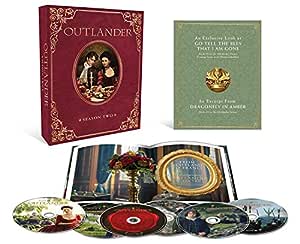 An English combat nurse from 1945 is mysteriously swept back in time to 1743.

The song playing in the opening credits uses the melody of the Skye Boat Song, a song that describes the escape of Bonnie Prince Charlie from Uist to Skye after his defeat in the Battle of Culloden. Composer Bear McCreary adapted Robert Louis Stevenson's poem Sing Me A Song of Lad that is Gone to fit with Claire's time traveling journey.

Doune Castle was used as Castle Leoch. The castle is famous for being featured in Monty Python and the Holy Grail. It was also used as Winterfell in Game of Thrones. The castle is located in the village of Doune, near Stirling.

4.8 out of 5 stars
4.8 out of 5
283 global ratings
How are ratings calculated?
To calculate the overall star rating and percentage breakdown by star, we don’t use a simple average. Instead, our system considers things like how recent a review is and if the reviewer bought the item on Amazon. It also analyzes reviews to verify trustworthiness.

John D. Decarlo
5.0 out of 5 stars Hands Down - THIS is the Outlander Season 2 Collection to Own!
Reviewed in the United States on May 18, 2017
Verified Purchase
Not being aware of Outlander world before the STARZ series aired in 2014, I was not prepared for how profoundly this multi-genre series would touch me, both in book(s) & Television. This series is what quality television & acting are all about. Nothing encompasses that more than this Season 2, Blu-ray collection. If you are a fan, this collectors edition is the one to get. It is a beautiful keepsake package with enclosed booklet, pictures & x-tra bonus features disc. My only criticism is the slipcover sleeve that houses the bonus disc. It's a tight fit,awkward & hard to get out w/out putting fingerprints all over it. I've since resolved that by keeping it separate in the decorative box housing the entire set. The box is like a book held closed by a magnet. When you open the cover it's like opening a book. Though the price is kinda high, if your a true fan, you don't mind shelling out the bucks for the treasures within. I must say that 'Dragonfly In Amber', the book that season 2 is based on was a hard book to get through, due to the scope & it's many characters. The TV adaption pulls it all together nicely. It's a shame that the Emmys once again snubbed Outlander because season 2 has some of the finest acting I've ever seen on TV or motion picture. Caitriona Balfe's acting alone just in episode 207 - 'Faith', is nothing short of extraordinary. If you are not touched by this performance, you do not have a heart or perhaps a soul. Her acting is intense, heart wrenching & completely visceral. Shame on you Emmys! Included in this package are extended scenes, deleted scenes, interviews with author, cast, writers & producers. Which to say the least, is the gravy for Outlander aficionados. As previously stated, to fans, THIS is the set to own. To newbies, You've never experienced ANYTHING like Outlander.
Read more
19 people found this helpful
Helpful
Comment Report abuse

Christina
4.0 out of 5 stars No Sophmore Slump
Reviewed in the United States on July 21, 2016
I realize that when talking about a product like this I will inevitably be writing two reviews: one for the quality of the season as a whole, and another for this specific packaging of said season.

I went into Outlander knowing about the books but not having read them, so what I knew ahead of time was vague at best. It made for a very fun viewing of the first season, and I downed all sixteen episodes in three days about two weeks prior to season two’s start. So unlike everyone else the summer before, I didn’t have long to wait and wonder how and if season two could live up to one. And, not having read the book it was based on, I knew even less about what to expect.

Imagine the longest and most satisfied sigh of contentment/relief you can. IF I had been worried about season two not living up to season one, I was more than reassured.

It was so, so good. In some ways, it was even better.

Season two begins and it is very much its own entity. It is a continuation obviously, but it also has its own stories, settings, characters, and general flavor, so that it really is almost like starting at ground zero. In a way this is great.

The bulk of the season’s plot in the front half is set in France and centers on Claire and Jaimie determined to quash the Bonnie Prince’s ill-fated rebellion. I have seen some complaints about season two not being such a lovey dovey season for Claire and Jaimie in France, and while this is somewhat true, it’s also understandable. Now that Claire has chosen to stay in the eighteenth century, it’s time to see what her marriage is really made of. With that comes the real trials and tribulations of being a couple and making two lives work together. Added to that is the weight of their mission and the lives of their loved ones and the future of Scotland as a whole. They should be stressed. But even better, it’s rewarding to see them work on their issues and figure out how to lean on each other as a team. Because they are going to need each other, as the glittering court of France is full of just as much gossip and backstabbing as one would expect. The minor intrigue we saw in season one is magnified for season two with assassination attempts, spies, betrayal, hidden messages, and the ever-present question of who to trust. It’s not the popular opinion, but this was my favorite section of season two because I adore the time period in France, but also because I liked the cloak and dagger feel to it. I loved seeing Jaimie and Claire's cunning tested, and loved trying to see if I could guess who was really their friend and who wasn't. As always the costume design is stellar, but it really shines during the France arc. Even the opening credits are redressed with the lyrics sung partially in French. J'adore!

Eventually the story does move back to Scotland, but I don’t want to spoil how or why. New characters appear, old characters return, and hidden motivations are revealed. All the while the story hurtles toward the fateful clash at Culloden and whether or not history can be changed by two people. Also new to season two are scenes set much further into the future. They sort of frame the entire season the way you would see in a book or a film, and ultimately they give the season a very unified feeling of being tied together. That and the hour and a half season finale—which felt like a film all its own—was so very satisfying in both how good and upsetting it was. I wouldn’t say it ends on a cliffhanger, but I do wish I had season three to hand right *now*. As soon as I finished it, all I wanted was to rewatch the entire show, seasons one and two, again.

On to this particular packaging of the season. I realize not everyone will feel compelled to spend the money on a collector’s edition. I myself am choosey as to which shows/movies get such treatment. Here’s the thing. I love Game of Thrones and have rewatched the seasons multiple times. I only own season one on dvd, and it was a black Friday sale to where I paid eleven bucks for a bare bones edition. Outlander I knew would be different. I dropped over six times what I spent on Game of Thrones on the ultimate collector’s edition because I wanted the extra scenes, the quality of blu ray, the soundtrack, the commentary by actors and the directors, the documentaries on costume and location. I’ll do it again when this edition comes out because I feel both the show’s quality and my own investment in rewatching it, merit it. To me, Outlander carries itself like a massive film. I don’t mind paying for something like that. Hopefully later I’ll be able to comment on how lovely the packaging really is, as well as how good the extras are. We’ll see. That and I am notorious for wanting my sets to match. It's shallow and petty, but there you go: I want season two to match my season one on my dvd shelf.

Though I think the show has a reputation for it by now, it is important to say Outlander is graphic in both scenes of sex and violence. While I don’t find either gratuitous, some will feel differently. That’s their business. Specific to this season there is violence carried out against a child and that might be enough to turn someone way, so I think it is important to include that.

Like others, I was surprised to see the soundtrack not included. The only reasoning I can think of is this is Amazon's set, so it isn't meant to be exactly the same as the Ultimate Edition Sony released of season one. Whether there will be such a release this year remains to be seen. That said, I agree that the price, as it stands, *is* a bit much considering the lack of the soundtrack. The price on Amazon will most likely come down over time, but I wouldn't pay more for a set with less episodes and extras than I did the ultimate collection.

As a final, final note, I will say I think Outlander was outright robbed for the Emmys. The costumes are amazing, but so are the performances and the writing, and I wish those had been honored. It is just as lavish and well-plotted and performed as other massive period pieces, specifically one who sweeps the Emmys year in and year out.

Heather MW
4.0 out of 5 stars I love the book and TV series
Reviewed in the United States on January 16, 2017
Verified Purchase
I love the book and TV series. But this is about this product which is the set.
I would not have purchased this collector's edition if it had not been on sale for 50% off. The packaging (book style) is lovely. Ron's tidbits about the shooting of this season was fun, but brief. The additional images of scene drawings and costume creations was beautifully done. The bonus disc was "eh" The exclusive look at "Bees" was one brief chapter (if Diana knows how to do "brief") or excerpt. The rest of the booklet was excerpts from DIA book itself. If you want more about "Bees" then just follow along Diana's FB page or blog whatever and you can get tidbits periodically. The extra you pay for this collector's edition (at full price) is not worth the extras that you get.
Read more
12 people found this helpful
Helpful
Comment Report abuse
See all reviews

Maelle
1.0 out of 5 stars BOX WAS BROKEN
Reviewed in Canada on September 22, 2020
Verified Purchase
The box was ripped broken
Read more