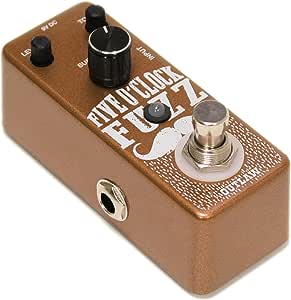 The Outlaw Effects Five O'clock Fuzz provides loads of rich, cascading sustain with crisp attack and subtle compression. Go from waxy smooth, violin-like sustain to grittier tones with razor-sharp bite. Sculpt your fuzz tone into everything from the thick leads of 1970's classic rock to heavier alternative sounds of the 80's and 90's.

Jonathan D.
5.0 out of 5 stars Hard pressed to find better!
Reviewed in the United States on January 26, 2020
Verified Purchase
This fuzz pedal is awesome! You can get so many different tones out of it from super heavy over compressed to a smoother 90’s grunge sound. And guess what? It’s tiny. You probably already knew that. Takes up minimal space, has awesome sound, and insanely durable build. If you are wanting fuzz, buy it. You will be hard pressed to find one with better tone and you certainly won’t find it for anywhere near the price.

Only minimal drawback, this does NOT come with a power supply. I have the Outlaw Iron Horse tuner you go with it (and all of my pedals) and that powers everything I own so far. Worth it.
Read more
One person found this helpful
Helpful
Report abuse

Amazon Customer
4.0 out of 5 stars Know thy Pedal
Reviewed in the United States on July 6, 2017
Verified Purchase
My apologies to anyone expecting "Great pedal!! Loved it!!" This will be a little more in depth.

First Impressions:
The name suckered me in. I'm kind of a fool for naming conventions like this, so Outlaw got me. I also appreciated that they avoided the double entendre naming conventions that fuzz pedals tend to go for. I'd rather not have a pedal called "The Dirty Pickle", or "The Fuzzy Crotch", or "Phallic Phuzz" on my pedal board while playing worship music at church. It was also smaller than I thought it would be, but I guess that's neither here nor there (I'm behind the times with the micro pedal craze). Also, if you don't already have a 9V adapter, order one with this thing or you'll have to sit around like an idiot for a few days with a pedal you can't use until your adapter comes in.

Sound:
If you were expecting any subteties, throw those expectations out the window. This is a reasonably priced fuzz pedal designed to fuzz the crap out your guitar, so if you're down with that, you're in the right place. I believe this was designed to emulate Big Muff fuzztones (don't quote me on that), so expect heavy heavy fuzz. You can dial it back some with the sustain knob, but to my ear, this pedal works best at around 1 to 2 o'clock. Too low and it's just a tad muddy with a lot of hiss and too high goes into almost metal distortion territory.

And don't expect to clean up with your guitar's volume or tone knobs. Volume goes from 0 to fuzz fast and then just goes to loud fuzz after that but what do you expect? This ain't a Five O'clock Gentle Tone Bender, it's a dang fuzz! Guitar's tone knobs do absolutely nothing. Thick fuzz at 0 and thick fuzz at 10 with no appreciable difference. But again, remember what this is.

Helpful tip:
Put your overdrive pedal in your chain before this pedal, not after. If it's before, and both are engaged, it'll boost the fuzz sound with some overdrive clarity. If it is after the fuzz, you'll just get more hiss and the guitar will disappear in the midst. I don't know if this is par for the course or just a quirk with this pedal, but there it is.

Verdict:
Hard to beat at around $50. Don't mistake my criticisms for lack of satisfaction. The fuzz that comes out of this thing belies the diminutive stature and cost, so as long as you know what you're getting into, this is a good buy. I give it 4 stars instead of 5 mostly because while a good value, it's still not quite a 5 star pedal, but I think that's the point.
Read more
4 people found this helpful
Helpful
Report abuse

Wess A.
1.0 out of 5 stars Chinese made.
Reviewed in the United States on August 20, 2015
Verified Purchase
Average sound but low quality materials. Mine came with lose screws.
Read more
One person found this helpful
Helpful
Report abuse

Gregg McLeroy
5.0 out of 5 stars All you need is Fuzz, Fuzz is all you need
Reviewed in the United States on December 29, 2016
This is a fantastic fuzz box in a very small housing. As with most pedals, I don't think the full range of the effect is completely usable in my application. But I can go from mild to wild with the turn of a knob. It's very musical and sounds great through my Fender or my Orange amp. It also drives into the experimental fuzz territory. It also takes on a lot of different character based on which pick ups I'm using. Outlaw makes some really great petals and they cannot be beaten at this price point.
Read more
One person found this helpful
Helpful
Report abuse

Amazon Customer
5.0 out of 5 stars Small Footprint, Big Tone
Reviewed in the United States on December 9, 2015
This is your basic muff style fuzz box, just in a very small package. Aside from having a cool name and sweet graphic it really does sound good. The tone knob is very sensitive and you have a full sweep that cuts or boosts treble. You can go from a big bassy fuzz up to a nasally/bit sounding fuzz. With the fuzz turned all the way up you get some hiss coming through, but that's not too surprising. The case is all metal and everything feels very solid. This little pedal is hard to beat if you're looking for a muff style fuzz that doesn't take up much real estate on your pedalboard. Sure it's a Chinese clone but the quality is solid and the tone is what you want from a muff style fuzz and you can't beat the price.
Read more
One person found this helpful
Helpful
Report abuse
See all reviews

Page 1 of 1 Start overPage 1 of 1
Previous page
Next page
Pages with related products. See and discover other items: fuzz guitar pedal, fuzz pedal guitar, fuzz pedal, fuzz pedals, guitar overdrive pedal, sound effects board
Back to top
Get to Know Us
Make Money with Us
Amazon Payment Products
Let Us Help You
EnglishChoose a language for shopping. United StatesChoose a country/region for shopping.
© 1996-2021, Amazon.com, Inc. or its affiliates